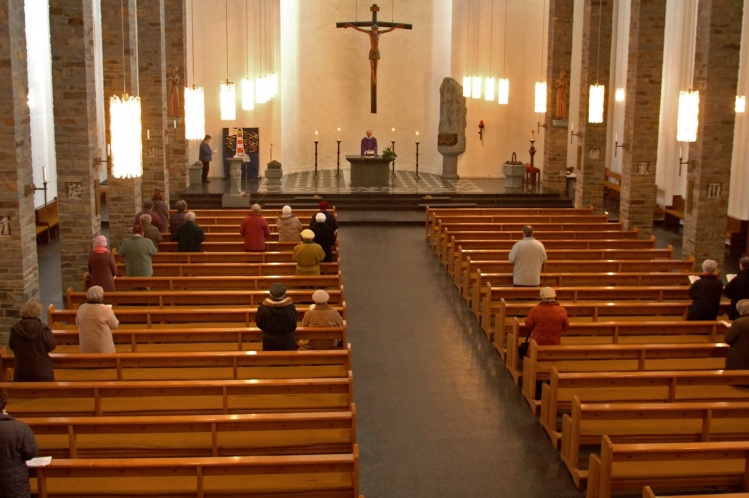 Amid the near euphoria expressed by so many regarding, as one publication put it, the “Groundbreaking First Year” of Pope Francis, there remains a sobering reality that no exuberance over a “rock star” pope can either hide or transform. As one who has lived through several papacies, I too can rejoice over a Jesuit pope inspired by the thirteenth-century man from Assisi; I can also appreciate the sentiment behind his depiction of the church, in his celebrated 2013 interview in America, as “a field hospital after battle,” a place whose purpose is “to heal wounds and to warm the hearts of the faithful.”

At the same time, however, living in the trenches of parish life, I am painfully aware of an ecclesiastical environment that produces a good number of those “wounded” people. For despite all the pious talk about how those working in the “field hospital” labor under the direction of the chief physician (God), if the hospital’s medical professionals (the ordained) turn out to be either inadequately trained—or even, on occasion, bona fide quacks—then the mortality rate among the wounded in this hospital will most likely continue to rise.

Like Paul Blaschko, I realize that my parish experience is but one instance of the possible difficulties that newly ordained priests and their parishioners face when seminary formation is poorly designed or misguided. Still, my own experience does offer a concrete example of how not to run a parish. What follows is, in my humble opinion, a brief history of the unraveling of a community.

In the past four years the city of twelve thousand where I have lived for nearly five decades has had four new priests assigned to its two Catholic parishes. Our first priests arrived in July 2010. Within a few months, two letters had already been written about them. One was an open letter, signed by seventeen parishioners, expressing concern about the highhanded manner in which various changes (such as ending the practice of having girl altar servers and lay eucharistic ministers) were being made or proposed, with little or no consultation with the laity. The other letter, signed by 70 percent of the families with children in the elementary school that had been flourishing in one of the parishes for seventy-five years, stated flatly that “the less involvement of our priests with the school, the better.”

By October about a third of the fourteen hundred families of the combined parishes had signed a petition requesting our bishop to remove the priests. The bishop’s response was a rebuke, couched in citations from canon law and threatening to put us all under interdict. Meanwhile, a number of us had been writing directly to the priests in the hope that they might understand the reasons for parishioner discontent. One reason was the priests’ seeming lack of interest in Catholic social doctrine. Such letters frequently went unanswered and unacknowledged. By the end of the 2012 school year, the Catholic school had to close, a consequence of many parents withdrawing their children and/or financial support. An exodus of people from both parishes had begun in the previous year, and this depletion has drained treasuries, in both parishes, that a few years ago were financially solvent.

Unlike many friends who have moved on to other Catholic churches—or Protestant ones, or none at all—I remained in our church, attending Sunday liturgies through the end of my pastoral council term last May. But my sense of connection with the parish has become so tenuous that I find myself pondering a new challenge: In what locale should I plan my funeral? At my age, eighty-one, that’s not an idle question. And I’ve already made life-changing decisions. The chief one was ending my attendance at daily Mass—a practice I’d begun when I was nineteen and entering my first Catholic school. After having experienced the blessings over many decades of being acquainted with priests who gave inspiring and scripturally well-grounded sermons, I found I could not endure one more day of what I can only call spiritual assault.

What do I mean by “spiritual assault”? Last year a fellow parishioner and I were conversing with one of our priests, a man in his forties; the topic was the importance of an appeal to Scripture for understanding the meaning of “church,” and the priest declared: “I hate the word ‘interpretation.’” A few minutes later, he added: “I hate the word ‘conscience.’” And our other priest, who is in his thirties, has proclaimed, in three respective sermons: “Men should govern women”; “You cannot love yourself”; and “The Catholic Church has always supported science.” The same man, moreover, informed all of us non-ordained folks at a pastoral council meeting that when a priest dies and enters heaven, “he goes to a higher place in heaven than laity do.” Finally, at the beginning of Lent both priests signed a letter, distributed in both parishes, advising us “to remember that all suffering is a gift from God.”

MORAL NONSENSE, SCRIPTURAL distortion, historical inaccuracy, and theological make-believe: this is what I mean by spiritual assault. (God help the people who get a barrage of all four at once!) It is the price we pay when ecclesiastical leadership forsakes both knowledge and wisdom. Even for Catholics who welcome a “leaner” church such a price would seem excessive. To return to Pope Francis’s notion of the church as a “field hospital,” can the “wounded” in its care really expect to be healed by doctors whose training peaked with the employment of leeches?

That metaphor may seem shocking, but it highlights one of the more troubling issues facing our church today—namely, that some of the very people positioned to offer advice on how to train the field hospital’s practitioners may well be oblivious to why casualties keep increasing. Take, for example, Monsignor Stephen J. Rossetti, a clinical associate professor at the Catholic University of America, author of Why Priests Are Happy: A Study of the Psychological and Spiritual Health of Priests, and presenter in June 2013 at an international symposium in Quebec on “The Training of Priests Today.” In “The First Five Years,” an article in America based on his Quebec presentation, Rossetti reports that his research “suggests that young priests today are happier, more optimistic about the priesthood, accepting of Catholic teaching, and personally committed to priestly celibacy than the cohort before them.”

“Accepting of Catholic teaching” is surely the pivotal phrase. What does Rossetti mean by it? He tips his hand when he commends the quality of seminary education today, praising seminary faculties for being “well trained…and faithful to the church.” But Pius XII’s 1943 encyclical on how to interpret the Bible, “On Promoting Biblical Studies” (Divino afflante spiritu)—the Magna Carta of Catholic scriptural scholarship—should give pause to anyone inclined to view “accepting of Catholic teaching” as an unqualified good. The question is, which Catholic teaching? The kind that properly applies to Scripture the “interpretive methods” embraced by Pius XII’s encyclical, methods further affirmed in 1965 by the Second Vatican Council’s Dogmatic Constitution on Divine Revelation (Dei verbum)—or the kind that “hates interpretation” and abuses Scripture?

This question sheds light on the tendency of some Catholics—including members of the magisterium—to use Scripture passages, without regard to their contexts, to justify current “Catholic teaching,” as though such teaching were what the biblical authors clearly intended. Recently, Margaret Nutting Ralph published an exposition of this kind of distortion of the Catholic tradition in Why the Catholic Church Must Change: A Necessary Conversation. If I thought “happy” young priests might encounter Ralph’s kind of discourse (or listen to it if they did), I would be more hopeful about the capacity of these men to be effective healers in the field hospital. Young priests encouraged to study Ralph’s theological reflections might well themselves escape the crippling affliction of clericalism, a key symptom of which Ralph identifies as “the ordained’s resistance to learning from the non-ordained.”

One point Rossetti stresses makes me less than sanguine, though, about the church’s immediate future. I’m referring to his call for “a masculine spirituality” as one of the “new requirements in priestly formation and support.” Assuring his readers that he is “not referring to something that is the sole province of men,” Rossetti proceeds to identify several “traits” that he argues “in this increasingly secular age…are becoming more essential for priests”—traits “like ‘willing to take a stand,’ ‘defends own beliefs,’ ‘willing to take risks,’ ‘assertive,’ and ‘acts as a leader.’”

The problem with such “traits,” however, is that besides being virtue-neutral, they are compatible with a personality that is authoritarian and intransigent. Does that fact not point to the problem of emphasizing priestly “leadership” in today’s church without acknowledging that many among the Catholic laity will no longer accept what theologian Paul Lakeland calls “the condition of passivity, if not infantilization, to which they had become inured...[in] previous centuries”?

In my view, young priests would be better served by being deeply grounded in the virtues of faith, hope, and love than in the “leadership” of so-called masculine spirituality. To those theological virtues I would add the cardinal virtues of wisdom, courage, temperance, and justice. Weaving these seven fundamental virtues into the formation of priests would provide, I submit, not only the kind of spiritual depth called for in the life of any Christian, but also the best assurance that those “assigned…to love and nourish [our] faith” (Rossetti’s words) would be equipped to do so.

Catholics are looking for a church grounded in Scripture and animated by mutual respect and cooperation, one in which baptism, not ordination, has preeminence. Theologian Elizabeth Johnson, in her magisterial 2005 book, Friends of God and Prophets, contrasts the “vastly distinct” relationships exhibited in a community of friends characterized by “mutuality and reciprocity” with those in a patriarchal system characterized by the unequal exercise of power. It is time for Catholics to learn how to practice a kind of leadership that encourages both ourselves and others in the becoming of friends of God and prophets. And if that sounds fanciful, it is perhaps a measure of how far we’ve drifted from a too-long neglected understanding of church as a community of equals, variously gifted, and called by the Spirit of Christ for the transformation of the world.