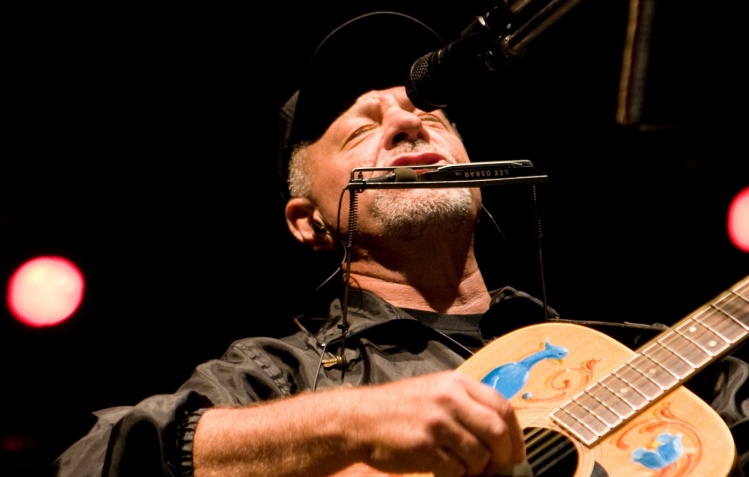 In 1978, the Argentine folk musician León Gieco wrote a song that would become one of the continent’s most enduring protest anthems, “Sólo Le Pido A Dios.” Recorded in the midst of Argentina’s Dirty War—the seven-year military dictatorship during which as many as thirty thousand left-leaning political dissidents were kidnapped, tortured, and forcibly disappeared by state-sponsored death squads—the song is a hymn against indifference in the face of suffering and political repression. The first verse begins: “Sólo le pido a Dios / Que el dolor no me sea indiferente / Que la reseca muerte no me encuentre / Vacía y sola sin haber hecho lo suficiente” (“All I ask of God / is that I not be indifferent to sorrow / That arid death not find me / empty and alone without having done enough”).

U.S. audiences might recognize the song from Wim Wenders’s 2018 documentary, Pope Francis: A Man of His Word. In the film, Mercedes Sosa’s seismic alto voice provides the background music to a montage of Francis embracing the sick and blessing throngs of ecstatic onlookers. Given the context of its composition, Wenders’s use of the song is especially striking. Jorge Mario Bergoglio was the Jesuit provincial in Argentina during the junta. The most contested part of his pre-papal legacy remains the question of whether—to borrow from the song’s lyrics—he had “done enough” to intervene during those years of terror.

To understand Fratelli tutti, Pope Francis’s new encyclical on social solidarity, it helps to step into the aesthetic world of Francis’s cultural and political imagination. For this task, “Sólo Le Pido A Dios” makes a fruitful companion soundtrack to the encyclical. This is not only because Francis undoubtedly knows the song, which is as recognizable in Argentina as “Blowin’ in the Wind” is in the United States. And it is not only because of unmistakable resonances in content: both Francis and Gieco use the form of prayer to implore a disillusioned, fractured, exhausted people to resist the anesthetizing allure of indifference and the monstrosities of war. The folk anthem helps reveal how the encyclical understands the relationship of current reality to hope for the future.

To understand Pope Francis’s new encyclical on social solidarity, it helps to step into the aesthetic world of Francis’s cultural and political imagination.
sharetweet

“Sólo Le Pido A Dios” is written in the subjunctive mood—the mood not of what is but of what may be. It dwells on the plane of the possible, to conjure an imagined future into the present. Theologian Roberto Goizueta suggests that for Latinx Catholics, the subjunctive discloses a sense of eschatological hope, joining the “already” with the “not yet.” The subjunctive mood exists in English, too, but less centrally. This makes translation a challenge.

Fratelli tutti, too, is a text in the subjunctive. We glimpse this, along with the challenge of translation, in an arresting paragraph in the first chapter. Describing how the ongoing global pandemic has laid bare the fragility of our social fabric and the discomfiting limits of our concern for the most vulnerable, Francis writes:

If only this may prove not to be just another tragedy of history from which we learned nothing. If only we might keep in mind all those elderly persons who died for lack of respirators, partly as a result of the dismantling, year after year, of health-care systems. If only this immense sorrow may not prove useless, but enable us to take a step forward towards a new style of life. If only we might rediscover once for all that we need one another, and that in this way our human family can experience a rebirth, with all its faces, all its hands and all its voices, beyond the walls that we have erected.

Where the English text reads “if only,” the Spanish version uses the word ojalá. “If only” sounds wistful, almost despairing—a sentiment weighted down by longing for an ungraspable alternative to present desolation. But ojalá implies a different intuition: it could yet be so. It can often be translated into English as “hopefully.” In Spanish, the same paragraph—all of it written in the subjunctive—reads like pandemic-era additions to Gieco’s classic: “Ojalá que tanto dolor no sea inútil.” All I ask of God, Francis implores, is that we not be indifferent to all this sorrow.

Fratelli tutti appears burdened by a constant need to defend itself from accusations of wishful thinking. A global politics rooted in charity “may seem naïve and utopian, yet we cannot renounce this lofty aim.” Aware of the aching distance between the cynicism and injustice of 2020 and the notion of a genuine, integral commitment to the common good, the text’s insistence that its constructive vision is more than idealism is understandable. What does it mean to embrace a vision of solidarity that feels, in this moment, frankly impossible? Here, too, we are aided by the protest anthem. Before Fratelli tutti advances doctrine, it invites readers to dwell in the subjunctive: to invite the longed-for future into the present, allowing it to seize our imaginations. In this imagining, as Gieco and Sosa sing, we shake off indifference for something like hope, without which solidarity is impossible.