The Sin in the Mirror 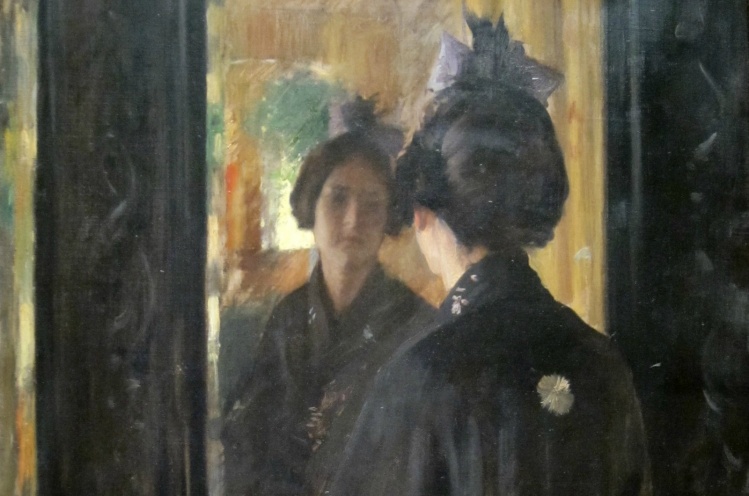 EVERY CHILD, as he wakes into life, finds a mirror underneath his pillow. Look in it he will and must, else he cannot know who he is, a creature fallen from grace, and this knowledge is a necessary preliminary to salvation. Yet at the moment that he looks into his mirror, he falls into mortal danger, tempted by guilt into a despair which tells him that his isolation and abandonment is irrevocable. It is impossible to face such abandonment and live, but as long as he gazes into the mirror he need not face it; he has at least his image as an illusory companion, so that, if he yields to despair, then he can never dare take his eyes off the mirror for an instant. Self-love is the faute-de-mieux of despair: "I am so dreadful that neither God nor other men can love me, therefore I shall have to love myself."

A parlor game for a wet afternoon--imagining the mirrors of one's friends. A has a huge pierglass, gilded and baroque, B a discreet little pocketmirror in a pigskin case with his initials stamped on the back; whenever one looks at C he is in the act of throwing his mirror away, but if one looks in another pocket, one always finds another one like an extra ace.

Most, perhaps all, mirrors are inaccurate and uncomplimentary, though to varying degrees and in various ways. Some magnify, some diminish; others, whatever their owner does, will only return lugubrious, comic, derisive or terrifying images.

But the character of our own particular mirror is not as important as we sometimes like to think. We are judged, not by the kind of mirror found on us, but by the use we make of it, by whether our riposte to our reflection, whatever that may be, is contrition or despair.

The advantage of a peculiarly warped mirror is that it makes it easier for its owner to say: "God be merciful to me, a sinner." As long as he is humble enough to say this and no more, it does not matter that he is in ignorance of what his sin really is. But its danger is that he will not be able to bear this ignorance and will therefore be tempted to imagine that his sin consists in having a worse mirror than the fellow next door.

Psychoanalysis, like all pagan scientia, says: "Come, my good man, no wonder you feel guilty. You have a distorting mirror, and that is indeed a very wicked thing to have. But cheer up. For a trifling consideration I shall be delighted to straighten it out for you. There. Look. A perfect Image. The evil of distortion is exorcised. Now you have nothing to repent of any longer. Now you are one of the illumined and elect. That will be ten thousand dollars, please."

And immediately come seven devils, and the last state of that man is worse than the first.

The totalitarian, of the Right or the Left, promises the crowd that if only they will all hand in their private mirrors to him, to be melted down into one huge mirror, the curse of Narcissus will be taken away.

We must never attempt to throw our mirrors away. We may only pray that God shall one day see fit to take them away from us. Perhaps they never are taken away, even from the saints, but in Paradise all mirrors become transparent and so cease to reflect.