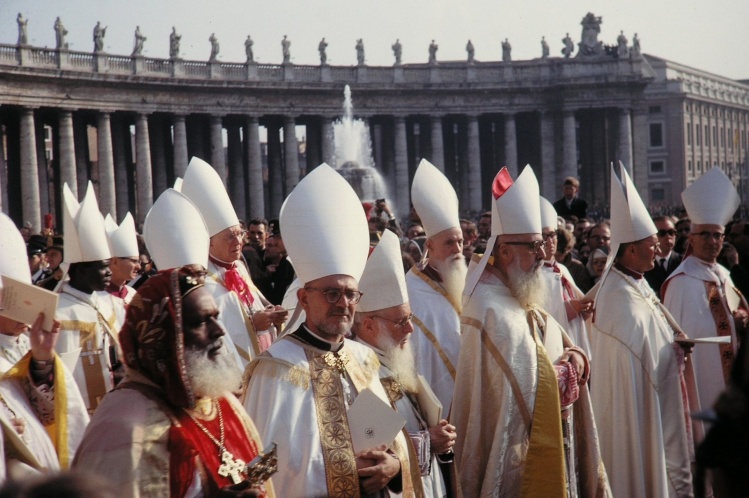 In an interview with Vatican News about Pope Francis’s apostolic exhortation Amoris laetitia, Vatican Secretary of State Cardinal Pietro Parolin suggested that it represented a “paradigm change” for the Catholic Church. George Weigel promptly countered: “The Catholic Church Doesn’t Do ‘Paradigm Shifts’” (First Things, Jan. 31, 2018). Rightly noting the origin of the concept of “paradigm change” in Thomas Kuhn’s classic The Structure of Scientific Revolutions, Weigel went on to characterize a paradigm change as “a dramatic, sudden, and unexpected break in human understanding—and thus something of a new beginning.” He cited the established principle that revelation “ended with the death of the last apostle.” There may be “development” of doctrine but only in continuity with “the faith once...delivered to the saints.” Such development would be an elaboration of the original paradigm, not the replacement of one paradigm with another.

Cardinal Parolin offered no account of Pope Francis’s presumed paradigm change beyond a “change of attitude,” “a new spirit…of approach.” Weigel suggested that Parolin may mean only that we should treat those who deviate from church doctrine “with sensitivity and charity.” That, wrote Weigel, would be “a worthy proposal” but hardly a “paradigm shift.”

To understand this issue it is necessary to explain the special character of a paradigm change. Kuhn distinguishes change in “ordinary” science from a “revolutionary” paradigm change. There is constant change in ordinary science as new observations are made and the scope of a theory is expanded. Revolutionary paradigm change occurs when a new theory shifts the fundamental framework that controls the data. The shift from Newton to Einstein is a classic example.

In Newtonian physics, space, time, and matter are unchanging and independent of one another: matter exists in absolute space and time. Motion is relative to the fixed measures of space and time. When space, time, and matter are fixed, material objects can accelerate by the simple addition of velocities. A bullet fired from a speeding train hits its target with the velocity of the shot plus the speed of the train.

Newton’s model broke down in the late nineteenth century when the speed of light was found to contradict it. Whether one was moving toward or away from an approaching light ray, the speed of light was constant. There were various attempts to solve the problem in order to make the new observations fit Newton’s assumptions. Someone even tried to explain the observations by suggesting that the impact of light rays shortened the measuring rods.

Einstein accepted that the speed of light was constant and challenged the assumption that space, time, and matter were fixed. He proposed that space, time, and matter were “relative” to the position of the observer. Roughly speaking, in Einstein’s theory, space and time become space-time and matter becomes a wrinkle in space-time. For Newton, matter remains the same regardless of acceleration; in relativity theory, mass increases with acceleration, reaching theoretical infinite mass as the object approaches the speed of light.

Kuhn argued that a paradigm change was “revolutionary,” but is such a change really as disjunctive as Weigel suggests? The theories of Ptolemy, Copernicus, Newton, and Einstein represent paradigm changes, but they are, after all, developments within the same science of cosmology. Every cosmology necessarily deals with the same range of subjects: space, time, matter, and motion. Nor does a paradigm change simply abandon the truths of the previous theory. Einsteinian cosmology includes the Newtonian equations for local systems while demonstrating their inadequacy on the vast scale unveiled by modern astronomical observation. It is in a way unfortunate that Einstein’s theory came to be labeled “relativity,” suggesting, as it might to some, that the laws of physics were now up to the observer. Not at all. Einstein’s theory was based on a fixed constant—the speed of light—and offered transformation equations that allowed observers to agree despite being on different observation platforms.

In short, a paradigm change can retain significant continuity with past theory even as it changes the fundamental framework. If Parolin’s comment is correct, some shift of a fundamental framework would have to occur in our understanding of the church. What would that look like?

A doctrinal paradigm for the church tends to substitute formulae for narration, a quasi-philosophical worldview for God’s self-revelation in the history of Israel and the church.
sharetweet

In April 2018 Villanova University sponsored a high-level conference on Pope Francis. The keynote address was delivered by the preeminent church historian John J. O’Malley, SJ. He noted that recent reflection on Vatican II had led him to “rethink and radically change my understanding of several then basic categories in [the church’s] vocabulary—doctrine, theology, spirituality, and pastorality. The council dissolved the boundaries separating them and restored them to a coherence among themselves that they lost in the thirteenth century.”

Let me assume that O’Malley’s “basic categories” constitute the essential factors that any view of the church would have to include. What is the relation of the four categories? They could be fixed and independent of one another, like the Newtonian conception of space, time, and matter. In that case, a description of Catholic life would be an inventory of the things Catholics do in each category. A more plausible view would recognize the influence of the categories on one another. Declaration of the doctrine of the Assumption would affect spirituality, or a popular devotion to Mary might pave the way for a differing theology of Mary. This kind of mutual influence would fit O’Malley’s suggestion that the independence of the categories was “dissolved” at Vatican II. What if this mutual influence was so great as to constitute a paradigm change?

If, as Parolin says, Pope Francis is following a paradigm change, what was the previous paradigm? History suggests that the fixed element in the previous paradigm is doctrine. Doctrine provides the basic framework that governs theology, spirituality, and pastorality. The dominance of doctrine is clear enough in the history of church councils. Ecumenical councils stretching back to Nicaea have aimed to define doctrine. Whether it was Nicaea asserting that Jesus must be spoken of as “truly man and truly God,” Trent clarifying the Catholic doctrine of justification, or Vatican I declaring in what sense the pope was “infallible,” the councils have been doctrinal.

Vatican II was markedly different. From John XXIII’s opening exhortation to the tenor of the final documents, Vatican II was explicitly pastoral. As O’Malley has demonstrated in various studies, the council’s aim was not to declare doctrine, but to persuade—to speak beyond the boundaries of Christian faith to the world. Critics often regard Vatican II as a minor council precisely because no doctrines were affirmed. Brushing up the rhetoric may be useful as a matter of public relations, these critics say, but nothing important changed; nothing new was defined. George Weigel could live with that. If, however, a pastoral council established a new pastoral paradigm for the church, then Vatican II suddenly looks revolutionary.

I can offer only the merest sketch of the difference between a doctrinal paradigm and a pastoral paradigm. Under a doctrinal paradigm, the main pastoral function is to teach defined doctrine; theology defends doctrine, and prayer must be guarded lest emotional excess edge into heresy. Teresa of Ávila was not the only mystic under suspicion for valuing direct relation to God over the mediation of the church. A doctrinal paradigm leads naturally to a hierarchical church structure that elevates teachers above the taught, clergy above the laity. Faith is distilled in the official catechism. This is not an unfamiliar characterization of Catholicism.

Under a pastoral paradigm, by contrast, the basic framework is the life of the community; doctrine will fail if it cannot create the loving community preached by the Lord. This is reflected in the idea of “reception.” It has been argued that Humanae vitae cannot be doctrine because it has not been received in the spiritual life of the community. Newman pointed out that the failure of lay reception preserved the church from the teachings of Arian popes. Giving laity a positive role in receiving doctrine undermines a strict separation of teacher and taught. In a pastoral paradigm, church structure is more horizontal than it is in a doctrinal paradigm. The competing metaphors of the church as a fortress or as a field hospital capture the difference between the doctrinal and pastoral paradigms.

What grounds might be offered for choosing between them? One can argue that Jesus in his preaching, his table fellowship, and his remarkable openness to women hoped to establish a community. “Thy Kingdom come on earth as it is in heaven” is the Lord’s prayer for such a community. In the deep story of the gospels, Jesus’ Crucifixion and Resurrection ground the hoped-for community. He lives on as the eternal host at the table of fellowship, as we acknowledge his real presence in bread and wine. The doctrine of Nicaea arises three centuries later, as the beloved community learns to express the faith that sustains its hope. The community existed long before the official formulation of its beliefs.

A general argument for rejecting the doctrinal paradigm is that it misreads the Bible. The Biblical scholar and theologian N. T. Wright notes that a doctrine-first approach to Christianity bypasses the narrative character of the Bible.

[A]ll world views are at the deepest level shorthand formulae to express stories, [and] this is particularly clear in the case of Judaism. The only proper way of talking about a god...who makes a world and then acts within it, is through narration. To “boil off” a set of abstract propositions as though one were getting thereby to a more foundational statement would be to actually falsify the world view at a basic point.... [W]hen creational and covenantal monotheists tell their story, the most basic level for their world view is history.

A doctrinal paradigm for the church tends to substitute formulae for narration, a quasi-philosophical worldview for God’s self-revelation in the history of Israel and the church. A pastoral paradigm acknowledges that the church’s doctrinal formulations survive only in the ongoing narrative of the church’s history, and only insofar as they serve the community Christ founded.

The attraction of a doctrinal church is that it appears resistant to the changes and chances of history. Rejecting a doctrinal paradigm seems to lead inevitably to ethical relativism and doctrinal division—precisely the concerns expressed by Catholics like George Weigel. A pastoral paradigm accepts the chances, changes, and risks of history. For the pastoral church the risk of relativism is offset by the risk of irrelevance. Doctrine is not timeless truth but eternal mystery, to be unfolded in the history of the People of God.