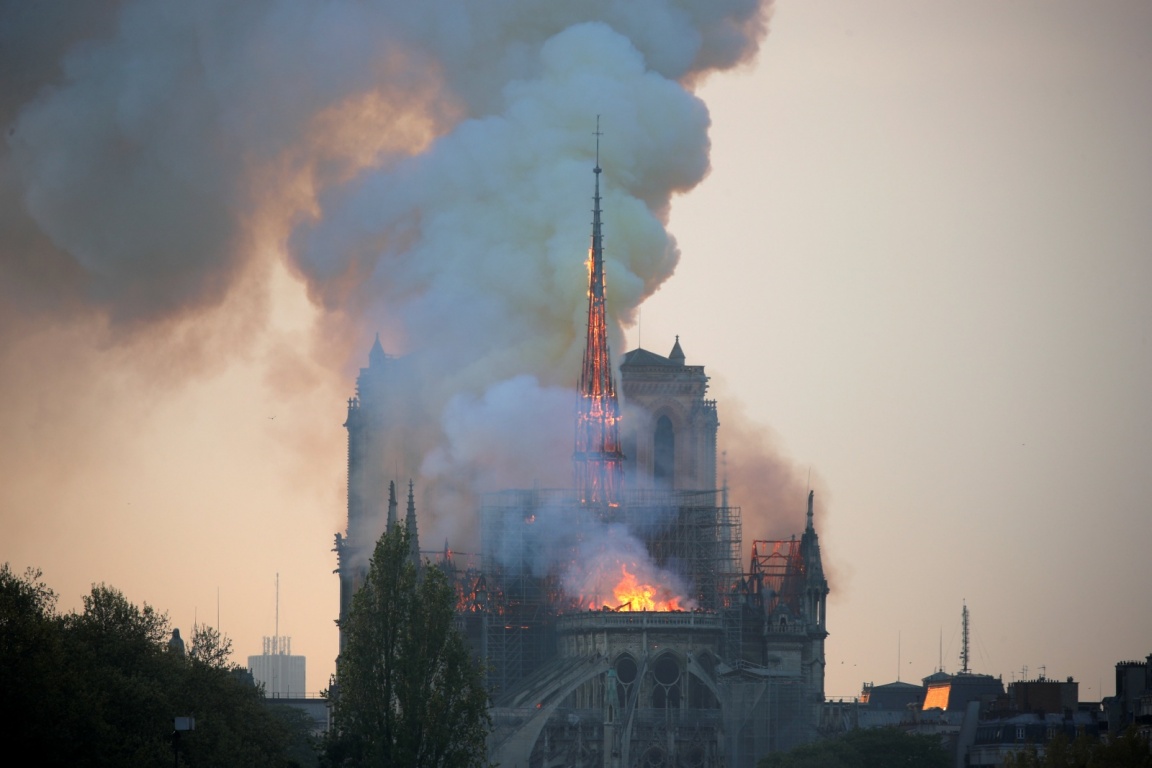 Flames and smoke billow from the Notre Dame Cathedral after a fire broke out in Paris April 15, 2019. (CNS photo/Charles Platiau, Reuters)

On Monday afternoon I was meeting with the former head archivist of the International Herald Tribune in a cafe behind the Louvre, not far from Notre-Dame. She was telling me about her efforts to find a home for the newspaper’s archives when an unusually large number of sirens interrupted our conversation. We paid the bill and made our way to the Seine one block away. Smoke was coming from the heart of Paris, billowing overhead across the sky and obscuring the sunset. Notre-Dame was on fire.

After saying goodbye I rushed along the river to get a closer look. “No, no, no!” I muttered to myself. “Not Notre-Dame...” I alternated between walking and jogging as I drew closer. At one point the crowd began running toward me. Ash had begun to fall on them. I continued on, pushing through the crowd all the way to Saint Michel, the metro stop in the center of Paris where there is a direct view of the church’s facade. I stopped and stood for a long time, just watching.

The sirens continued. Policemen began to yell “Reculez! Reculez!” (“Back up! Back up!”) No one paid them any heed. Small bits of ash continued to fall on us. At one point, something stung my head. I reached up and ran my hand through my hair; it was ash, still hot. Eventually, the police managed to close the bridge over the Seine and began moving us backward toward the far sidewalk. Sirens and ash and smoke and rows and rows of smartphones raised toward the sky. And there, at the center of it all, a burning church.

I looked behind me to find thousands of people going back as far as the eye could see, their faces shocked and solemn, all trying to make out what damage the fire was doing. No one spoke of anything else. Occasionally, flames leapt into view, but otherwise we had to surmise what we could from the color and thickness of the smoke. Someone behind me remarked that dark smoke meant the roof was still burning, but that white smoke would mean it had been extinguished. I followed the train of smoke over me; it was still quite dark. A little before 8 p.m., a large burst of smoke startled us; later I learned that it was the moment that the spire collapsed. We noted that firemen were walking along the bell towers and speculated that they must be stable enough. Surely, this was a good sign.

In such a moment, it became all too easy to speculate. I wondered if the facade would be destroyed or if the entire building would collapse. Was I witnessing the end of Notre-Dame? Would the art and relics be saved? In my anxiety, I ran my hand through my hair, only to find even more ash. I also took pictures, and tried to post some to Facebook and Twitter. But mostly I continued looking at the church as it burned. I suppose I was hoping for some last moment of inspiration, some final surge of aesthetic brilliance, before it crumbled and disappeared forever. But nothing came, and despite the continuing blaze the towers were still standing. The police kept pushing us back. Smoke continued to waft above us. At some point, I realized that I had a splitting headache. It was almost dark, and I was dejected, overwhelmed by the crowd and conflicted by my participation in the spectacle of it all. So I turned, made my way through the mass of people, and took the metro home.

Geographically, everything in France turns around the kilometer zero marker in front of the church. And in a city that changes very little, Notre-Dame is the most constant of constants.
sharetweet

I have lived in Paris for almost a decade now. Along with tens of millions of others, my first experience of the church was as a tourist, now almost a decade and a half ago. But since then, many other memories have been layered on top of that original encounter. Countless times, I have partaken of that summer ritual of baguette and cheese and wine, a picnic on the quays of the Seine in the shadow of the cathedral’s reassuring presence. I remember a date in my first month in Paris which ended in a very long conversation next to the statue of Charlemagne in front of the church. And I remember the memorial service in Notre-Dame in 2011 on the tenth anniversary of the September 11 attacks. In November 2015, the day after the deadliest terrorist attacks in France since World War II, I felt a compulsion to wander over to Notre-Dame in the early morning. As I sat on a bench in front of the church, closed for safety reasons, the only other person who wasn’t a police officer or a Chinese tourist struck up a conversation with me. “To kill in the name of God is a rejection of all true religion,” he began, shaking his head. He was a Polish priest, like me an adopted son of Paris. For over half an hour we spoke of religion and violence, Poland and America, love and hate—a moment of human connection in a time of barbarism.

The last time I entered Notre-Dame was on November 11, 2018, for a centenary service of the end of World War I run by the British Legion. Flags of every country in the world lined the nave. Dozens of Anglophone pastors and priests entered the church to bagpipe music. Renowned organist Malcolm Archer composed a musical piece explicitly for the service, and they sang the same Te Deum that was sung under that roof a hundred years earlier when the war drew to a close. Toward the end, they sang their national anthem, God Save the Queen, followed by the national anthem of the host country, La Marseillaise. It was a remarkable moment. I turned my head to take it all in: hundreds of British citizens were belting out a stirring rendition of La Marseillaise in the most iconic of French cathedrals. Afterward, a French Catholic woman in attendance observed, “We don’t usually sing La Marseillaise in church.”

If my connection to Notre-Dame is deeper than the average tourist’s, then it is deeper still for those who are Parisian by birth, particularly for the Catholics among them. For most Parisians, Notre-Dame is a prominent part of the landscape—the city’s center and its fulcrum. Geographically, everything in France turns around the kilometer zero marker in front of the church. And in a city that changes very little, Notre-Dame is the most constant of constants. Whenever you look down upon the city, your eyes alight upon the two islands in the center of the Seine. In the center of the center is Notre-Dame de Paris. 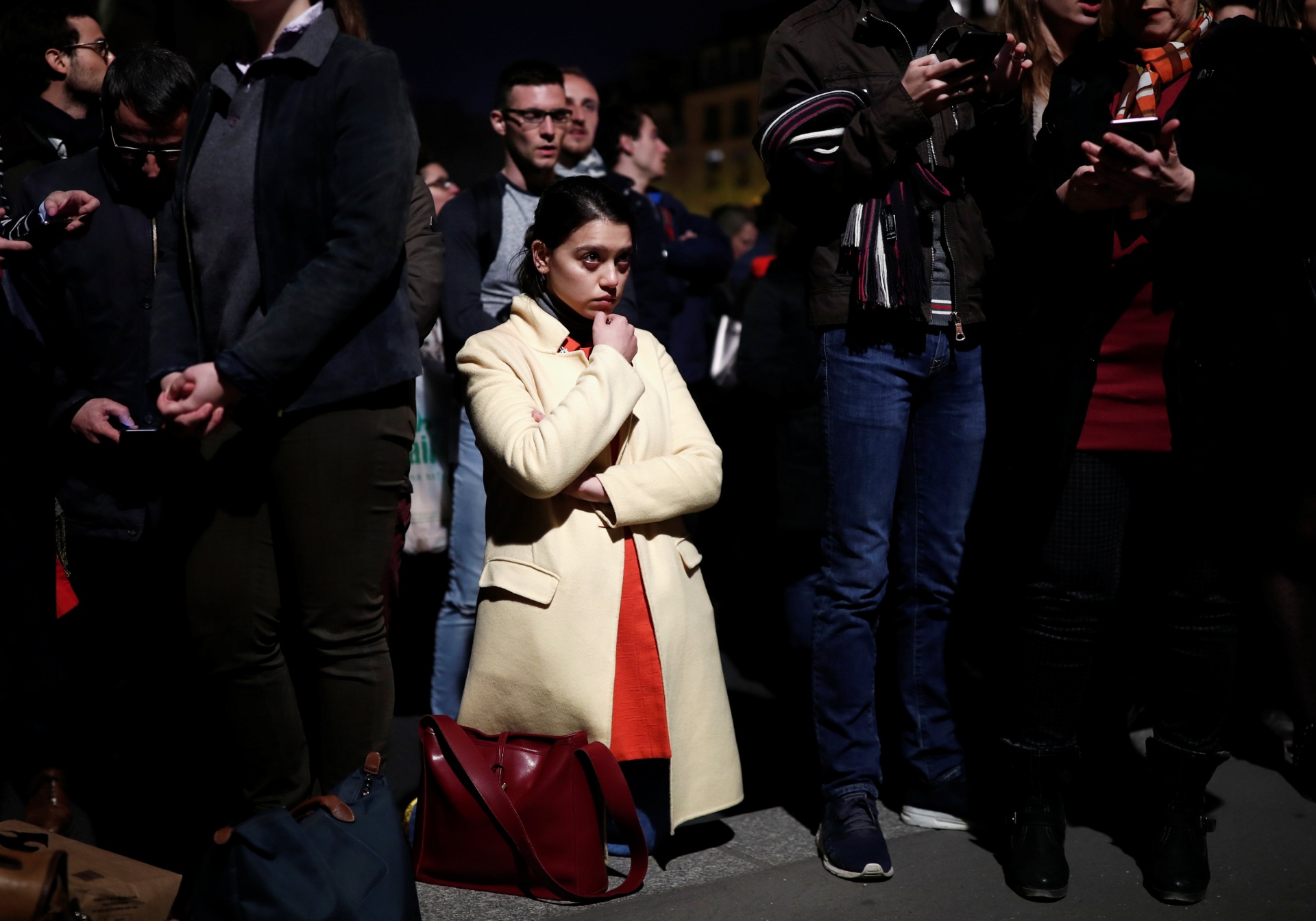 People react near the Notre Dame Cathedral after it suffered heavy damage from a fire in Paris April 15, 2019. (CNS photo/Benoit Tessier, Reuters)

When I finally made it back home after leaving the crowds, I turned on the television. Live footage showed that two hundred firefighters were attempting to tame the flames. Meanwhile talking heads droned on and on, speculating about the source of the spark that destroyed the cathedral’s wooden roof and nave or how many billions it would cost to rebuild. Then the politicians arrived on the scene. “We will rebuild Notre-Dame,” President Emmanuel Macron promised the world in an otherwise lackluster speech. Later in the evening, a group of Catholics were shown gathered on the Pont-au-change, a bridge behind the cathedral, praying and singing. Many stayed long into the night.

Both believers and non-believers mourned the fire. The French word patrimoine, used much more frequently than “patrimony” is in English, helps explain why. The French are educated into a respect for their cultural inheritance and a strict obligation to preserve what has been passed down. The concept is all the more remarkable for the fact that it helps mitigate, if not resolve, a long-standing conflict between the secular French state and the Catholic Church. It allows adamant atheists and practicing Catholics to both respect Notre-Dame and the very Catholic past that it represents. For the non-believer, the church is a priceless artifact to be preserved for the sake of history, culture, and aesthetics. For the Catholic, the church is a cathedral and the site of centuries of Christian tradition and worship. In either case, a respect for the past leads nearly all French citizens to love and admire Notre-Dame, concealing for the most part powerful sources of societal discord.

The morning after the fire, I dropped my daughter off at kindergarten. Still overwhelmed, if perhaps slightly more hopeful given the news that more had been preserved than some expected, I headed toward Notre-Dame once again. I made my way around the perimeter, closer to the cathedral than it had been the evening before, weaving my way between thousands of gawkers and dozens of media tents from all over the world. When I stopped at one point along the river, I found myself next to Nicolas Dupont-Aignan, the leader of a small right-wing political party. He was listening as an older man in a beret recounted his memories of Notre Dame since the first time his grandmother brought him when he was a boy. Their conversation then transitioned toward the shameful lack of investment in maintaining Catholic churches.

There is likely to be a great deal of finger-pointing with regard to the responsibility for this blaze. The Catholic Church no longer officially owns Notre-Dame as it did before the French Revolution, nor is it a Temple of Reason or even a government warehouse as it was directly after the Revolution. Under the current regime, in place since 1905, the state owns Notre-Dame but grants the Catholic Church exclusive rights to use the building along with the responsibilities for maintenance and restoration. Generous donors (including many from the United States) have made some renovations possible. And if the outpouring of support since the fire is any indication, this will continue to be the case. President Macron has also pledged the government’s full financial and logistical support, guaranteeing that Notre-Dame will be rebuilt, but further muddying the waters when it comes to ultimate responsibility for the building.

For a few hours on Monday, an illusion of Notre-Dame’s permanence quickly gave way to fears of its demise. But it was only partly destroyed. Its exterior still stands; its presence still reassures. The first photos to emerge from the cathedral’s interior are beautiful and haunting. Certainly there is the temptation to offer pronouncements about the fire’s symbolic meaning, and debates on national identity have already begun. For now, though, it might be more fitting to look upon Notre-Dame once again in gratitude and in awe.

Published in the May 17, 2019 issue:
View Contents
Tags
Spirituality
Secularism and Modernity
Architecture

Christopher Schaefer has lived in Paris since 2011.