Recording Angel with a Camera 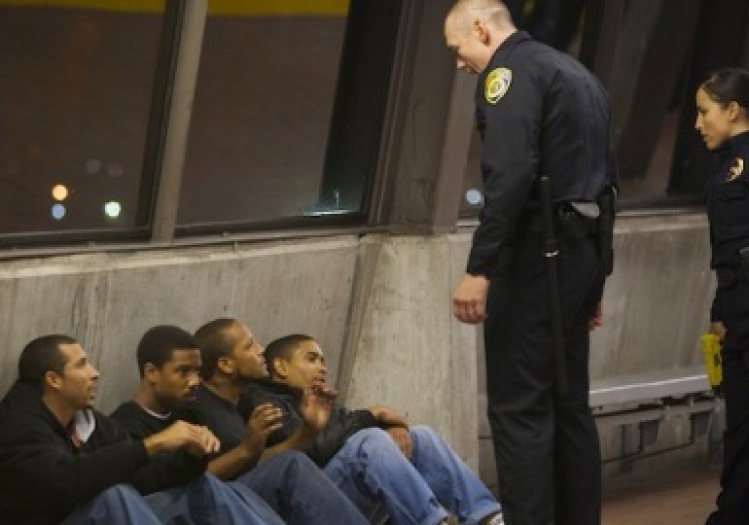 In Oakland, California, during the early morning of January 1, 2009, Oscar Julius Grant, a twenty-two-year-old African American, was shot and mortally wounded by an almost equally young policeman who later said he thought he was firing his taser, not his gun. Before he was shot, Grant, detained for allegedly brawling on a train, had been ordered to lie face-down on the platform of Fruitvale Station; he had complied and was perhaps struggling for breath in an uncomfortable position, which is perhaps what provoked the cop to reach for the taser. There are lots of perhapses in this case, but it was certainly a tragedy in the usual pathetic sense of the word: an event that caused great suffering. Was it also a social tragedy underpinned by bigotry and injustice? And could it also have been a tragedy in the classic sense—a terrible fate befalling an individual whose suffering was somehow at one with the way he lived? To answer yes to that last question is not to blame the victim, for Oscar Grant did not deserve to die any more than King Lear deserved to suffer. But was Grant’s death in any way connected to his character?

Among the several virtues of Fruitvale Station, the film Ryan Coogler has made about the event, perhaps the most remarkable is the way Coogler shows that all these definitions of tragedy may apply. His avoidance of easy blame and too-simple social commentary, along with his willingness to face up to the human messiness of what may have happened, mark him as an important new artist. In Fruitvale Station, character and social injustice and sheer fortuity all join at a fatal juncture.

Like Joyce’s Ulysses, Fruitvale Station is a day-in-the-life story, but here we know from the start that this is also a last-day-in-the-life story; much of the movie’s pathos grows out of our awareness of doom hovering over everydayness. Many of Oscar’s last actions, according to the movie, were attempts to correct his past mistakes so that he would have more of a future. He tries to get a job back that he lost through irresponsibility, gives up his petty drug-dealing, recommits himself to the mother of his child after cheating on her, and tries to win back the trust of his own mother, Wanda, after alienating her by going to jail for gun possession. The sense of an aborted self-redemption swells the pathos. A decent, loving, but severely flawed man was on the cusp of becoming a better one when he was killed.

But suppose Oscar Grant hadn’t struggled against his flaws but had surrendered to them? Wouldn’t he have been killed anyway? Wasn’t it Grant’s skin color and not his character that made the officer in charge order him and his friends out of the subway car and onto the platform? Or, more immediately, when an incompetent cop’s gun went off, was it malignant fate—which brings down airplanes and afflicts children with dreadful diseases—that canceled out Oscar’s good intentions and rendered futile all his struggles? Were Oscar’s character and past entirely beside the point?

Not quite. As a flashback shows, the thug who attacks Oscar on the train and provokes the ensuing melee was in prison with Grant, and their enmity began there. So should we say that Oscar’s crime and jail time brought him into contact with the catalyst of his death? That would bestow a sort of character-is-fate gravity on Oscar’s end, but it would also be too pat, as Coogler evidently realized. We can’t blame Oscar for resisting the thug’s attack, and we can’t blame his pals for rallying to his defense when the hoodlum sucker-punches him. But would Oscar have been forced to lie down on the platform if he hadn’t mouthed off to the senior officer? Would anyone have thought to tase him? (In the film, Oscar’s less obstreperous friends are lined up but not tased.) Then again, doesn’t any citizen have the right to protest police misconduct without being tased? This movie is endlessly complicated and messy because life is endlessly complicated and messy.

To make us feel the maddening contingencies and twists in the story, Coogler employs cinematic methods that mimic documentary: handheld cameras that float around a scene, lengthy takes, concentration on faces, sparing use of music with silence sometimes serving as a kind of music. Here the camera is a sympathetic voyeur, always hunting for the significant detail, the telling reaction. It slides into family gatherings, shows Oscar lounging by a bay as he contemplates his prospects, ambles down a train aisle on New Year’s Eve as the passengers spontaneously break into a jam section. The compositions are loose and artfully contrived to look haphazard. (One lapse into artiness: the use of slow motion to convey Oscar’s joy in being with his little daughter. The phony lyricism of this scene reminded me of a 1970s perfume commercial.)

But when the director needs a strong composition, he rises to the occasion. Oscar’s mother, Wanda, walking away from him after a bitter argument in the prison visitor’s room, moves into close-up on the right side of the frame, and we see the frustrated love she feels for her son welling up in her eyes. In the same shot we see Oscar in the background on the left running after her, pleading for forgiveness, but also struggling violently with the guards holding him back. So much about this troubled young man’s life is visible in that moment: his need of the love his mother is so willing to give, the volatility that slides him from affection to anger and back again, his cluelessness about where and when to rebel.

The casual naturalism of the first three-quarters of Fruitvale Station cunningly nudges us into feeling that so unmelodramatic a day should have ended as most days end, in peaceful banality. This makes the last twenty minutes shattering. The same camerawork that lulled us in the earlier scenes now steers us into the chaos on the station’s platform, and amid this chaos the film manages to pinpoint the exact moments that turned the altercation into a tragedy. The sudden shifts of viewpoint, including glimpses of what passengers’ cell phones are capturing, are masterfully executed. (The superb editing is by Claudia Castello and Michael P. Shawver.) After the shooting, the tension holds. The panic of cops suddenly realizing that the situation has gotten out of their control, the bewilderment of the girlfriend separated from Oscar in another part of the station and unable to decipher what’s going on, the hard-pressed competence of the medics trying to save a life, the gathering of the family at the hospital with the mother trying to fortify hope with prayer, even the visions flitting through Oscar’s dwindling consciousness on the edge of death: all this is rendered as documentary beyond documentary, as if the Recording Angel were using an Arriflex camera instead of a quill.

Michael B. Jordan has won well-deserved praise for his nuanced performance, but he is simply first among equals. The entire cast excels at the ultra-realism that American film acting has pushed to its limits over the past sixty years, a style perfect for the low-budget world of independent filmmaking. This kind of acting comes so close to everyday behavior that the camera almost seems to be spying on the actors. By comparison, the pioneer realism of such actors as Marlon Brando and Geraldine Page has now begun to look as stylized as Kabuki. The naturalism of the acting perfectly suits Fruitvale Station, which seeks to do justice to the all the layers of this real-life episode. It lets no one and nothing off easy—not our racial situation, not our economics, not the police, and not even the object of the film’s fierce compassion, Oscar Julius Grant.