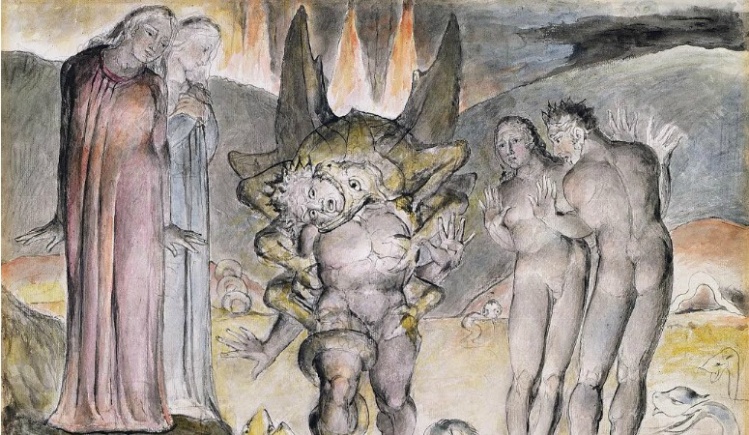 Reading Dante’s Commedia as Theology, Vittorio Montemaggi’s wonderfully provocative, beautifully written new monograph on the Italian poet’s medieval epic, begins with a pair of sentences unlike anything I have ever encountered in a scholarly work:

I have written this book throughout in the first person, as an exercise in self-discovery. It has a very strong autobiographical vein, with a particular emphasis on spiritual transformation and on the expression of gratitude toward those from whose goodness I have had the privilege of benefitting in preparing the present study.

These lines encapsulate the novelty of Montemaggi’s singular journey into Dante’s theology, a topic of renewed interest in the somewhat rarefied and sometimes combative field of academic Dante studies. As curious, quirky, and all-embracing as the Commedia itself, Montemaggi’s kaleidoscopic book fuses two very distinct modes of writing about Dante that until now have always remained separate: a reader’s deeply personal, spiritual engagement with the poem on one hand, and a professional Dante scholar’s rigorous intellectual analysis on the other. Presenting Dante not simply as a poet who creates art that happens to involve theology, but as a truly original theologian whose poetic art is his theology, Montemaggi ably articulates the startling inventiveness of Dante’s bold theological vision: for the Commedia insists that we are all called to divinization, to union with the living God, whom Dante invites us to discover within ourselves and, more importantly, in our loving relationships with each other.

In joining the autobiographical with the scholarly, the book takes considerable risks, and the success of Montemaggi’s experiment hinges on the newness of his study’s form. We might call this a “total response” to Dante’s art, which demands that the reader engage with the fiction of the poet’s journey through the afterlife with her whole mind, heart, and soul. Montemaggi thus takes up Dante’s call to encounter—with self, with the author and his characters, with fellow human beings, and with God—by framing his investigation of the poet’s theology within a tripartite structure whose orderly shape recalls the formal arrangement not only of the Commedia itself but also the many “aesthetic” theological treatises produced in the later Middle Ages, such as Bonaventure’s Itinerarium Mentis in Deum. The three chapters each contain twelve distinct yet linked “reflections” that focus on a wide range of topics. A reflection devoted to literary analysis might be followed by one that addresses a methodological or theoretical concern particular to theologians. And this in turn might be followed by a reflection on the author’s own scholarly bildungsroman. This orderly yet elastic structure allows readers to rove liberally and meditatively through the path of Montemaggi’s investigation, concentrating on those aspects they find most relevant to their own particular scholarly, spiritual, and personal interests. Such a non-linear style of argumentation brilliantly reflects the mode of reading proposed by Dante himself, who, like Montemaggi, repeatedly invites his readers to savor slowly the Commedia’s vivid imagery, dramatic encounters, and rich conceptual discussions, enticing them to mull over earlier passages whose meanings change and deepen in light of later ones. Thus does the form of Reading Dante’s Commedia as Theology promote the same interpretive freedom that Dante’s poetry aims to instill in readers, who are encouraged to bring their entire personhood into creative, open-ended contact with the text.

It is this unitive act, between life and literature, readers and writers, that for Montemaggi forms the theological core of Dante’s art. His book argues that for Dante human life is a journey toward union with God that must be undertaken with others, and it is concrete acts of love that move us ever closer to our destination. According to Montemaggi, Dante’s great poem embodies what it describes: it is a work of love, not just a work about love.

Like Dante’s claim to be a scriba Dei, God’s scribe, whose poema sacro is the product of two artistic hands, both God’s and his own, Montemaggi’s assertions about the Commedia as an instance of love may strike some readers as overly lofty. Yet his book is at its strongest precisely when it presents original analyses of different characters and passages from the text that directly support such claims. Montemaggi thus interprets Dante’s long encounter in Paradiso 21 with the hermit-turned-cardinal Peter Damian as paradigmatic of the poetics of the Commedia as a whole. Here the pilgrim discards his searching theological inquisitiveness in favor of an ordinary human encounter. So too does Montemaggi present a fresh and compelling interpretation of Dante’s prayerful relationship with the Virgin Mary, in which Dante’s writing of poetry becomes a spiritual practice animated by both sincere repentance and radical hope. Such unconventional readings enable Montemaggi to argue persuasively for a vision of the Commedia as a text whose very essence is to bring people closer to God and to each other:

Even more convincing are the passages in which Montemaggi examines key concepts and figures that at first glance seem most contrary to his thesis of Dante’s Commedia as a theological labor of love. His chief strategy in such instances is to underscore the essential literariness of the poem, whose deep complexities and tensions work to engender theological reflection rather than to prescribe dogmatic answers. In his discussion of Dante’s notorious pride and egotism—a perennial issue in Dante scholarship—Montemaggi describes Dante’s creative rewriting of the Our Father in the opening lines of Purgatorio 11 as an instance of Dante’s sincere authorial struggle between self-importance and self-effacement. By detailing the many layers of meaning embedded in Dante’s vocabulary and syntax, Montemaggi reveals how the poet movingly presents himself and his poem as works-in-progress, caught up in the throes of the human struggle for renewal against the backdrop of divine grace.

Montemaggi’s examination of one of the most difficult theological questions in the poem—the eschatological status of the pagan poet Virgil, Dante’s beloved guide for the first two-thirds of the poem—adds weight to the book’s central claim that the tensions within the Commedia are in fact instances of the poet’s uniquely literary approach to theology. Montemaggi reads Virgil’s sudden disappearance in Purgatorio 30, which has long been interpreted as evidence of Virgil’s eternal damnation, as deliberately unresolved. Montemaggi argues that the lack of a clear answer to Virgil’s fate prompts us to begin a process of “existential questioning as profound as [Dante’s] own concerning the question of salvation and concerning our own inextricable spiritual involvement in the mystery of salvation itself.” The passage is as much about Dante’s theology as it is about our own: “How we respond to such a challenge will depend on our own personal perception of our relationship with the divine.”

As Montemaggi acknowledges at the outset of his book, the novelty of his method is bound to be somewhat polarizing. The author’s detailed descriptions of his many encounters with other scholars and their work may strike some readers as too anecdotal or effusive. Montemaggi anticipates such reactions, seizing on the experimental nature of his autobiographical-critical endeavor as an opportunity to theorize extensively about the procedures and purposes of literary and theological scholarship. Such an experiment requires a serious and sometimes uncomfortable vulnerability: early on Montemaggi recounts how in his classes he sometimes asks his students to “look deeply into each other’s eyes,” a practice that enables them to meet one another at a level of personal depth carefully excluded from most academic inquiry. Even the most sympathetic readers might be uncomfortable with this intimate, unabashedly subjective approach. But readers should take seriously Montemaggi’s claim in the epilogue that “the end of scholarship is praise.” One of this book’s virtues is that it invites us to re-examine the ways in which our own experience is either integrated into or segregated from our professional and intellectual lives.

Reading Dante’s Commedia as Theology is likely to make an impact far beyond the field of Dante Studies. It gracefully does what Dante himself did best, finding harmony among a staggering variety of disciplines and voices. Readers interested in the academic fields of Religion and Literature, Theology, and Dante Studies, as well as those fascinated by Christianity, poetry, and aesthetics more broadly, will find much to ponder in this engrossing account of Dante’s theology. And the success of Montemaggi’s unconventional project invites us to reconsider the ways in which we choose to live out our vocations as readers, writers, scholars, and Christians.