'The Beautiful Country and the Middle Kingdom' 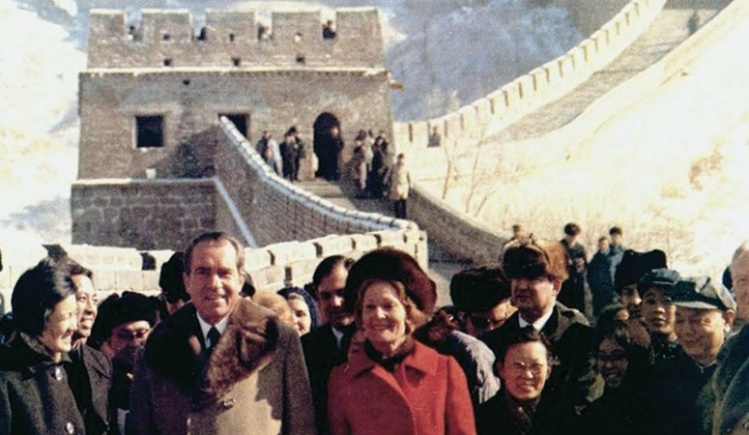 Forget the absurd statement on the dust jacket of this book that most people “think of America’s ties with China as starting with President Nixon’s trip in 1972.” John Pomfret, a Chinese-speaking journalist with the Washington Post, takes us back to the birth of the United States, and roughly 70 percent of his book is done before Nixon steps onto the Beijing airport’s tarmac that February day forty-five years ago. In 1784 the financier Robert Morris sent off the Empress of China to Canton, a trip that brought him and his fellow investors a profit of almost a million dollars in today’s currency. Though, for reasons having nothing to do with China, Morris later found himself in debtor’s prison (in those innocent days, financial screwups led to legal judgments rather than huge Wall Street bonuses), the China trade took off and Morris’s own Philadelphia, as well as Baltimore, New York, and Boston, all became centers of a lucrative commerce whose profits helped our infant country get off the ground and develop.

There is nothing new about globalization, of course, and the historians remind us that China was a major player in the world’s economy before the first Western traders set up shop there centuries ago. Trade, with its continuing social and political ramifications today, is important to Pomfret’s work. But there is much more here, of course. He is interested, for instance, both in American views of China and Chinese views of America, views that could be admiring or pitying, frightening or hopeful. He is interested both in the Protestant missionaries who often determined American visions of the country and in today’s secular missionaries, like Hillary Clinton addressing the World Congress of Women in Beijing in 1995. He looks at diplomats, such as the nineteenth-century reformist Anson Burlingame, who saw an American mission to help China into the modern world; John Hay, whose Open Door policy (1899–1900) sought to hold China together and profit from it as well; John van Antwerp MacMurray, who in the 1920s considered East Asian stability more important than change, however well meant; and  the otherwise hardheaded Henry Kissinger, who swooned at the vision of Chairman Mao and his elegantly urbane yes man, Zhou Enlai.

These visions change from time to time, of course, but beneath them lay several strong beliefs. Most tempting, perhaps, has been that of America as China’s big brother, helping it to navigate the currents of modernity in the hope that, having learned the benefits of democracy American style, a stable and open Chinese partner would emerge. As Pomfret points out, such hopeful views of China were seldom shared by Chinese leaders, attractive as they might seem to intellectuals, like Hu Shih eighty years ago, or dissidents like the great physicist Fang Lizhi more recently. Pomfret also makes clear that, despite such hopes, America has always been reluctant to shed blood and treasure in order to see them fulfilled. (It’s impossible to read Pomfret’s passages here without thinking of our response to the Arab Spring, whose apparent democratic leanings proved to be at odds with Middle Eastern stability.)

While China’s share of the world’s economy declined precipitously until the late twentieth century, it is today fully back with all flags flying. Yet there are two problems with unduly isolating Sino-American relations. First, they are only part of a larger story, one in which for many years first Britain and later Japan played the leading roles. Second, there is a temptation, particularly rife among American observers, to treat China (and not only China) as an object rather than a subject—to credit the United States with all the good in China’s development and to blame it for all the failures, as if China had no voice of its own. Pomfret sees this and is scathing (rightly, I think) against all those—notably Barbara Tuchman in her influential 1972 book on General Stilwell—who claim that we lost a chance in not siding with Mao and his Communists against Chiang Kai-shek’s Nationalists after the Japanese surrender of 1945. The Soviet Union took that chance, of course, as did India, but within little more than a decade Beijing and Moscow were at each other’s throats, and in 1962 Chinese troops invaded India.

Americans once liked to believe they had a “special relationship” with China because, unlike the grasping imperialists of Europe and Japan, we made no territorial demands. That’s nonsense, of course, since after 1842, through the system of unequal treaties (as the Chinese call them), Americans were full participants in foreign assaults on Chinese sovereignty. Pomfret is right to emphasize the enormous importance of American education to generations of Chinese students from the late nineteenth century on. (Today there are over 328,000 of them—soft power at its best). But while America took the lead here, other nations played a role too—Britain, France, Germany, and above all, Japan. Thus, though Pomfret does much with the visit of John Dewey (Hu Shih’s Columbia professor) right after the World War I, there’s no mention of the equally influential trip of Bertrand Russell. So too, as Chiang Kai-shek sought to cement his power in the 1930s, the role of German military teachers and advisers was enormously important.

As Pomfret points out, today few still believe that China’s opening will lead to a more moderate politics and social order. He closes with examinations of such controversial and difficult topics as human rights, trade imbalances, and China’s continuing claims—despite their recent denial by the the Hague’s Permanent Court of Arbitration—to most of the South China Sea. He ends on a moderately optimistic note about the future, despite the jittery authoritarianism of Xi Jinping. But recently we have seen Donald Trump’s twittery interventions on the Taiwan issue and the “one China policy” hammered out by American and Chinese negotiators many decades ago. Of course, as Pomfret recently told National Public Radio, the notion of “one China” is a fiction (“creative ambiguity” Henry Kissinger called it). But it has been an extraordinarily useful and irenic fiction.