The attack on Ukraine poses challenges for the Vatican.
By Massimo Faggioli
Russia
Ukraine
Vatican
Pope Francis
War and Peace 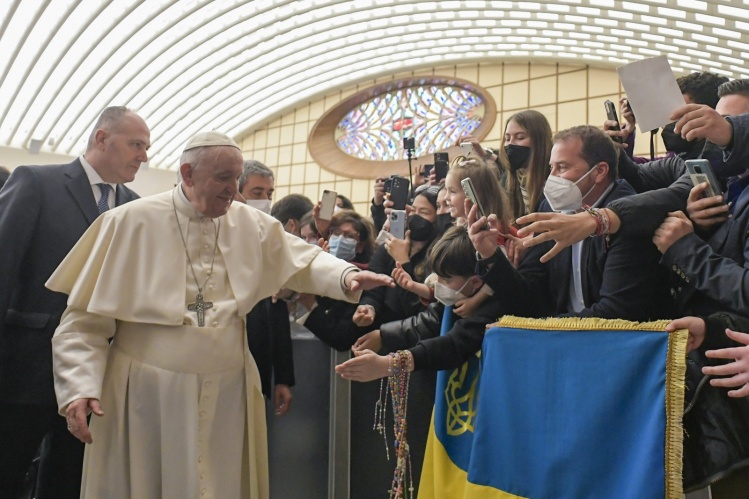 Pope Francis walks near a flag with the national colors of Ukraine during his general audience at the Vatican, March 16, 2022 (CNS photo/Vatican Media).

Russia’s invasion of Ukraine raises important questions for the Vatican about its role in international relations and, more specifically, about the geopolitical vision of Francis’s pontificate. It’s easy to think of the Cold War as the closest historical precedent to the current moment, but in fact it might be more helpful to compare the situation now to the period spanning the twentieth century’s two world wars. We are witnessing as Europe did then not only the invasion of a sovereign state, but also the human tragedy that necessarily results. The slaughter of civilians, the flight of more than 3 million refugees, and Putin’s language of “denazification” evoke the genocide by starvation in the 1930s and deaths of several million Ukrainians in World War II. We’re also being reminded of the key role Ukraine has long played in the history not only of Eastern Orthodoxy, but also of Judaism and Catholicism.

All of this presents challenges for the Vatican, as the weeks following Russia’s attack have shown. Like political and business elites in the West, Rome for the past twenty years has largely ignored the increasingly open contempt Putin and the Moscow Patriarchate had for liberal democracies and the undeniable (if incomplete) freedoms they offered. In the hours before the invasion, Francis’s personal appeals for peace were timid and reluctant (contrast them to those he made at the September 2013 prayer vigil in St. Peter’s Square, while the United States was threatening action in Syria). In the first few days following it, the pope and Vatican media were notably careful not to mention either Russia or Putin. Since then, however, Rome’s stance has become less neutral. First there was Francis’s unannounced visit to the Russian embassy to the Holy See. Then, at the Angelus prayer on March 6, Francis announced his intention to send two Curia cardinals to Ukraine as a sign of “the presence of the pope and all people”: Konrad Krajewski (Polish-born) and Michael Czerny (Czechoslovakian-born Canadian Jesuit) who arrived in the area between March 7 and 8 for a mission that is humanitarian, not diplomatic. The pope referred to Ukraine as a “martyred country” where “rivers of blood and tears are flowing.” He stated his willingness to do anything to help mediate for peace in Ukraine. He called the situation not just a “military operation, but a war that sows death, destruction and misery,” a direct rebuttal—if not an official condemnation—of Putin’s propagandistic description. Francis also called for a return to respect for international law.

In the Angelus of March 13, Francis talked about “unacceptable armed aggression” and repeated that “God is only the God of peace” and “those who support violence profane his name.” Still, there is uncertainty about the goal of the Holy See’s activity: Does it indicate a willingness to act as mediator, as Vatican Secretary of State Cardinal Pietro Parolin mentioned, or is it a prophetic denunciation of the atrocity of war, as the Angelus of March 13 seems to suggest? Then on March 15, Pope Francis announced he would consecrate both Russia and Ukraine (the aggressor and the victim) to Immaculate Heart of Mary on March 25, with simultaneous acts at St. Peter’s in Rome and in Fatima, Portugal. It is a response similar in tone, perhaps, to the weaponization of the icon of Mary by the Patriarch of Moscow, but conveying a very different message. While no one should expect a direct criticism of Vladimir Putin or the Russian government by name, these moves nevertheless demonstrate a crescendo in tone since late February. Still, the media are questioning the “silences” of Pope Francis about Russia in suggesting a sinister echo of the silences of Pius XII during the Holocaust. Those in charge of crafting the pope’s message through Vatican media are pushing back against these accusations.

This silence reflects the Holy See’s wishes not to be perceived as favoring a particular side.
sharetweet

At the same time, there has been no official mention of the rights of the Ukrainian nation. The Compendium of the Social Doctrine of the Catholic Church says that a nation has a “fundamental right to existence” and a right to “its own language and culture, through which a people expresses and promotes its fundamental spiritual ‘sovereignty.’” This silence reflects the Holy See’s wishes not to be perceived as favoring a particular side, and to prevent minorities in other countries from using such a statement as justification for their own nationalistic aims, especially in Eastern Europe and the post-Soviet states. There’s a feeling of muted disappointment among Ukrainian Greek-Catholics, as well as Eastern Orthodox elites in the West, who had hoped for more engagement by the Vatican with both Putin and his key religious ally pushing the neo-imperial narrative of the Russian regime, Moscow Patriarch Kirill. In some ways it recalls the post–World War II era, during which anti-Communist Polish and Hungarian Catholics were frustrated with the Ostpolitik of the Vatican while fighting for the survival of the Catholic Church behind the Iron Curtain. Even so, this is a fundamentally different moment. Indeed, the Vatican is confronting a scenario more analogous to the 1930s, as Pope Francis has sadly warned in the last few years.

At Vatican II and through much of the post–Vatican II period, in the eyes of Rome, ecumenism with Eastern Orthodox churches in Europe went hand in hand with the work for peace and the encouragement of political and military detente between the United States and the USSR. After the invasion of Ukraine, this is no longer possible, given the formal and perhaps irreparable split within Orthodoxy, which is mostly owing to the rupture between the patriarchates of Moscow and Constantinople. Further, the Russian Orthodox Church itself has since come to serve as the religious arm of Russia’s nationalist, expansionist ideology; it is not the persecuted Church of the Soviet era. But the heirs of the KGB and the hierarchies of the Moscow patriarchate have become strange bedfellows, which does recall the days of the Soviet Union. The subjection of Russian Orthodoxy to Putin’s regime has consequences that go far beyond Russia and far beyond religion: it is part of the ethno-nationalist, “revanche de Dieu” phase of global politics.

This has also widened the gap between the Vatican and the Russian Orthodox Church. Pope Francis speaks the language of nonviolence while Patriarch Kirill has adopted the language of the crusade. And since the invasion, relations have grown more tense not only within Eastern Orthodoxy, but also between the bishop of Rome and the Patriarch of Moscow. On March 3, Kirill met with the papal nuncio in Russia, then released a statement characterizing the Russian Orthodox Church as peacemaker but also containing a subtle warning to Rome (and others) not to interfere: “It is very important that Christian Churches, including our Churches, voluntarily or involuntarily, sometimes without any will, would not become participants in those complex, contradictory tendencies that are present on the world agenda today.” In his now notorious March 6 homily, Kirill cast the war in metaphysical terms and as a response to gay-rights movements and western values. In his March 13 homily, he reiterated that view and even accused Jews in Ukraine of limiting freedom of religion for the Ukrainian Orthodox loyal to Moscow. One is tempted to remember with nostalgia the times when there was talk of “ecumenical winter,” a crisis in the encounter between churches of different traditions. The relations between the Vatican and Moscow are back to square one, or worse. This lifting of the veil on the apocalyptic view of the relations with the West by Russian Orthodox leaders (Patriarch Kirill, as well as Metropolitan Hilarion Alfeyev, the chairman of the Department of External Church Relations of the Moscow Patriarchate) should be a wake-up call for leaders of the Catholic Church who have romanticized Russian Orthodoxy in the process of resisting Church reforms pushed by Western liberal theologians.

The Vatican’s diplomatic efforts are also running into challenges. The icy reactions from Russian Orthodox leaders in Moscow and from Foreign Minister Sergey Lavrov to the Vatican’s outreach reveals Putin’s low regard for Rome’s diplomatic initiatives. And the United States has been less than enthusiastic about the Vatican’s offers to help mediate negotiations, which even within the Vatican walls don’t have unanimous support. The city of Rome traditionally has been and continues to be an important neutral venue for peace talks. But the value of papal diplomacy has been reduced in the eyes of the West, in part because of the Vatican’s slow reaction to Russian threats, and because of continued doubts in American intelligence circles (even after the departure of Donald Trump and his secretary of state, Mike Pompeo) about its position on China. Things could get more complicated should Ukraine survive as a sovereign and independent state, since that may actually contribute to greater radical nationalism with religious overtones. And not only in Ukraine: Russian aggression and threats to the security of the continent could further push Catholics in Europe in the direction of nationalism, continuing the trend we’ve seen in Poland and Hungary the last few years.

Russia’s war in Ukraine, where there is clearly an aggressor and an attacked, tests the doctrine of “positive neutrality” articulated by Cardinal Parolin in 2019. But more fundamentally it tests the Holy See’s overall approach to international relations. Europe has been thrust into uncertainty at a time when Pope Francis has long since pivoted the Vatican toward the “global south” and Asia, in recognition of the global Church’s demographic changes. The return of great-power war in Europe may force Rome to look again at the old continent. For the foreign policy of the Holy See, the invasion of Ukraine means a return to a situation more like 1917 and the inter-war period of the twentieth century than to the age of Ostpolitik of the 1960s and ’70s. And it could also change the long-term picture for the Vatican more than the attacks of 9/11 did.