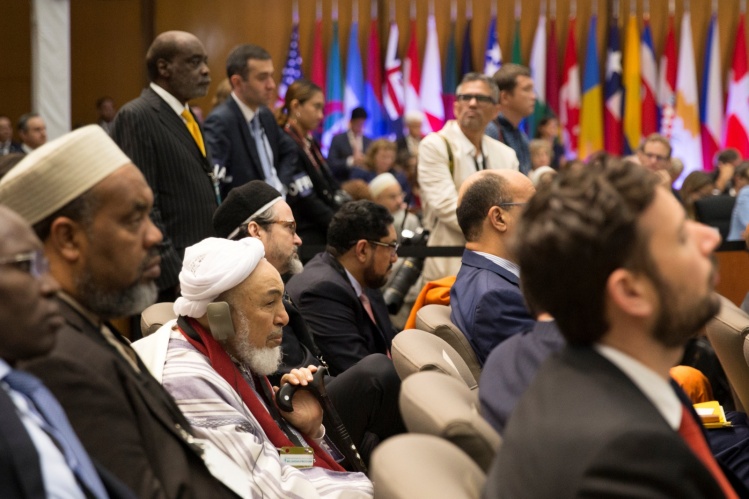 It’s been more than fifty years since Vatican II ended—on December 8, 1965—and some of the conciliar documents are now showing their age. One of these is the declaration on religious liberty, Dignitatis humanae, the conciliar document that benefited most from American influence, and above all from the influence of John Courtney Murray, SJ.

On April 26, the Vatican published something new on this topic, “Religious freedom for the good of all. Theological approach to contemporary challenges.” Issued by the International Theological Commission (whose members are appointed by the pope in consultation with the Congregation for the Doctrine of the Faith), the eighty-seven-paragraph document is the fruit of work that began in 2014 and ended last year. It was approved for publication by Pope Francis on March 21 and is, for now, available only in Italian. (The passages quoted in this column are my own translations.)

“Religious freedom for the good of all” builds on the fundamental theological insights of Dignitatis humanae—e.g., the need to update the previous papal teaching (especially under Pius IX) of hostility toward religious liberty, and the priority of Jesus’ own teachings and example as a guide to the church’s teaching on this subject. This new document walks in the footsteps of Vatican II in its “refusal of the attempt to make of political power an instrument for proselytism” (par. 8). Citing Benedict XVI’s “‘hermeneutic of reform,’ of renewal in continuity with the one church” (par. 27), the new document elaborates the teachings of Dignitatis humanae for societies that have become more secularized or more diverse since Vatican II.

The document is addressed both to the leaders of the church (its hierarchs and intellectuals), and to secular leaders: both must help develop an understanding of religious liberty that will promote peaceful coexistence among different religions and ethnic-religious identities.

Notwithstanding its critique of liberal modernity, the document does not invite Catholics to look back to Christendom with nostalgia.
sharetweet

The document invites theologians to come up with a conception of religious freedom adequate to our times: “the correct elaboration of the thought on religious freedom in the public sphere calls Christian theology to an in-depth study of the cultural complexity of today’s civil order in order to stop, from a theoretical point of view, the regression toward theocracy” (par. 13). In defending religious liberty for all, the Catholic Church is not simply pursuing its own institutional interests or seeking special advantages; in fact, it refuses to be identified “as the subject of a private interest that competes to affirm its privileges” (par. 52–53). The church is not a lobby.

The document calls on its readers to be aware of the influence on religious liberty of new media and social media, which often use religious identity to manipulate people, playing one group off another (par. 55). There is also a reminder that in Jesus’ own teachings we find a distinction between civil political authority and religious leadership. The document cautions us to avoid simplifying Augustine’s thought about the state and politics: “Far from denigrating the state, with the idea that the supreme commitment of the state to guarantee temporal peace is connected with the destiny of peace promised by God in eternal life, Augustine restores to the state the integrity of its function” (par. 59).

The sections devoted to the role of the state provide a substantial critique of the liberal order, taking aim at that order’s “obsession of a perfect neutrality about values” (par. 45). The commission calls this “a form of ‘soft totalitarianism’ that makes the public sphere vulnerable to the spread of ethical nihilism” (par. 4). The document rejects both theocracy and a model of agnostic multiculturalism that deprives religions of their legitimate function of mediation in civil society (par. 53). The commission emphasizes the internal contradiction between the supposed neutrality of the state and secularism: “the state tends to assume the form of a ‘secular imitation’ of the theocratic conception of religion, which decides the orthodoxy and the heresy of freedom in the name of a political-salvific vision of the ideal society: deciding a priori the perfectly rational, perfectly civil, perfectly humane identity of society. Absolutism and relativism of this liberal morality here enter into a conflict with the effects of illiberal exclusion in the public sphere, within the alleged liberal neutrality of the state” (par. 63).

Notwithstanding its critique of liberal modernity, the document does not invite Catholics to look back to Christendom with nostalgia: “the constraint of a state religion, which was proposed at a certain point in European history to stem the excesses of the so-called ‘religious wars,’ seems to have been superseded in the current evolution of the principle of citizenship, which implies freedom of conscience” (par. 70). Indeed, the document emphasizes the role of the state in protecting religious liberty, but also in protecting citizens from the abuses of religious liberty: “it is up to the political authority, guardian of public order, to defend citizens, especially the weakest, against sectarian tendencies of certain religious claims (psychological and emotional manipulation, economic and political exploitation…). Among the just demands of reason, in its juridical-political implications we can include—in recent years—the peaceful reciprocity of religious rights, including that of freedom of conversion” (par. 70). This is a new problem, one Vatican II did not anticipate: “It is no longer a question of applying religious freedom only with respect to the religion of others, but also to the criticism of one’s own. This situation poses delicate problems of balance in the application of religious freedom” (par. 80).

In seeking to promote this balance, the document rejects both confessionalism and French-style laïcité: “The state cannot be theocratic, or atheist, or ‘neutral’…rather, it is called to exercise a ‘positive secularity’ [laicità positiva] toward the social and cultural forms that ensure the necessary and concrete relationship of the rule of law with the effective community of those entitled to rights” (par. 86). The rights to religious liberties (plural) of different religions must be held in balance with the common good: “The state cannot just accept different understandings of religious liberty, transforming them into law, without scrutinizing their impact on the common good” (par. 44).

When Vatican II ended, Western liberalism was still on rather friendly terms with Christianity. That is no longer the case: secularism has grown more assertive and less accommodating.
sharetweet

“Religious freedom for the good of all” is the most comprehensive Vatican-approved document on religious liberty since Vatican II. In these past fifty years the theological principles haven’t changed, but the context has. Relations between religions, between secularism and religious identities, between church and state, between members of all religious groups (including the Catholic Church) and their hierarchical leaders—all these have changed since 1965. In this document we see Catholic theologians rereading Dignitatis humanae in light of recent developments: the “revanche de Dieu” since the end of the 1970s, the so-called thesis of the “clash of civilizations” that reappeared after 9/11, and the impacts of mass migrations on the religious map.

When Vatican II ended, Western liberalism was still on rather friendly terms with Christianity. That is no longer the case: secularism has grown more assertive and less accommodating. During the same period, there has been a resurgence within Christianity of post-liberal and post-secular theology and politics. The International Theological Commission offers a fresh analysis of the ongoing renegotiation between church and state, in which the so-called life issues still play an important part. But it is no longer possible for this renegotiation to take place bilaterally. Even in historically Catholic countries, the conversation must now involve other religious communities as well, especially Islam. The confessional state may be a thing of the past in the West, but not in the rest of the world. Not in the Middle East, for example—or even at the edge of Europe (cf. the Erdoğan government in Turkey).

“Religious freedom for the good of all” offers a Catholic critique of the pretensions to neutrality of the liberal state, but it also warns against a theocratic reaction to those pretensions. Aggressive laïcité and Catholic neo-integralism are not the only two options available. The document makes clear the need to reconsider and revise the moral and theological foundations of the modern pluralistic nation state—but precisely in an effort to save it from its own worst tendencies. The role of the state in securing the common good and protecting religious liberty seems more important than ever now that formal religious hierarchies have less control over religion than they used to. But just as religious identity roams out and beyond the control of churches and of organized religion, political power today roams out and beyond the control of nation-states. In the long history of the West, “the sacred” was left to the institutional church and power was exercised mostly through the state. Church and state were locked in a kind of forced marriage, but now they are completely dissociated and alienated from each other. This is the major change from the time of Vatican II, and the reason Dignitatis humanae needed an update.