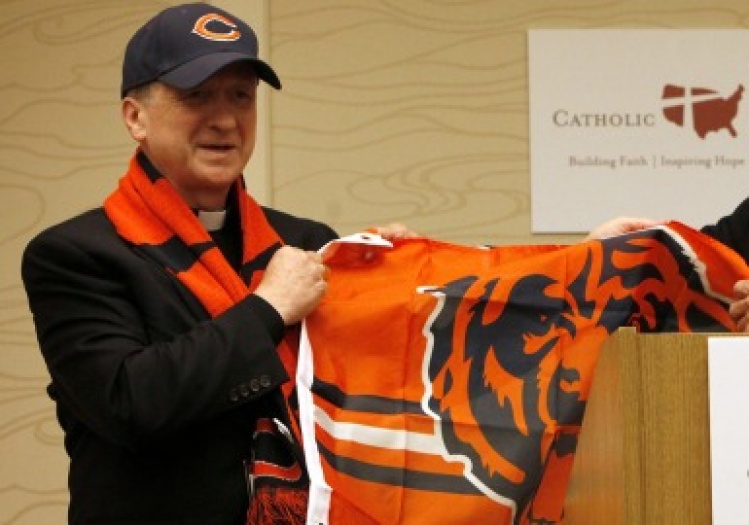 Leaders can make decisions that signal big changes in the political, religious and ethical landscape. In naming Bishop Blase Cupich as the new archbishop of Chicago, Pope Francis did just that.

Cupich, now the bishop of Spokane, has been described in media accounts as a “moderate” within the Catholic Church. Temperamentally, this is exactly what he is, an advocate of dialogue and civility. He’s also wise about rejecting labels. Parrying at his first news conference after his appointment was announced on Saturday, he offered this response when asked if the moderate tag fit him: “I am going to try to be attentive to what the Lord wants. Maybe if there is moderation in that, then maybe I’m a moderate.”

Those nicely reticent double “maybes” shouldn’t fool you into believing that Cupich avoids speaking his mind. He has been a courageous voice inside the U.S. Conference of Catholic Bishops against a culture-war approach to evangelization and politics that pushes so many away from the Gospel.

He has also been as tough as any prelate in his candor about the church’s profound failures during the sex abuse crisis. “Catholics have been hurt by the moral failings of some priests,” Cupich wrote in 2010, “but they have been hurt and angered even more by bishops who failed to put children first.” He knows the church will never get beyond this scandal until it’s obvious to the faithful that the hierarchy understands how deeply Catholicism was marred by institutional sin and not only by individual crimes.

His appointment will have an impact beyond the Catholic Church because it tells us a great deal about the role Pope Francis wants the church to play in American life. Cupich played this down, too. “I think he sent a pastor, not a message,” he told reporters.

But in his case, the pastor is the message. Because of appointments made by Pope John Paul II and, to a lesser degree, Benedict XVI, the bishops’ conference has moved to the right over the last quarter-century. Many conservative bishops have expressed uneasiness or even skepticism about Francis’s leadership -- notably his rejection of the idea that issues such as abortion and homosexuality take precedence over economic justice and care for the marginalized. Francis has also caused discomfort by insisting on a church that accompanies people on their journeys rather than expending most of its energy condemning and judging them.

Of the four most politically potent posts in the American hierarchy -- the archbishops of Boston, New York, Chicago, and Washington -- Chicago was the first to come open since Francis’s election. In naming Cupich, the pope sent the strongest possible hint that he wants the American church to move in his direction.

Cupich is a Francis Catholic through and through. He was one of the first church leaders I know who immediately and fully understood the meaning of this pope’s election -- Cardinal Theodore McCarrick, archbishop emeritus of Washington, was the other -- and in an email Wednesday, Cupich embraced the pope’s commission in explaining his priorities.

“I keep going back to the Holy Father’s call for the kind of serious ongoing conversion that all of us are called to,” he wrote, “on the issues of accompaniment, non-judgmentalism and the throwaway culture of exclusion.”

Asked which aspects of the American church needed to be preserved and safeguarded, he offered a list that made his priorities clear. Note what he put first: “our outreach to the poor, the participation of laity in the liturgical life of the church, the vitality of the new immigrant groups, the heroism of parents who sacrifice for their children because of their faith, and the continuing witness of priests and religious women.”

As for American politics, Cupich has emphasized dialogue rather than confrontation with the Obama administration over the contraception mandate in the Affordable Care Act. While many bishops declined to help the uninsured sign up for coverage under the ACA, Cupich asked Catholic Charities in eastern Washington to join in the effort on the basis of a long-standing Catholic principle. “We consider health care a basic human right,” he said.

The refrain of a popular hymn goes: “They’ll know we are Christian by our love.” Not, it should be noted, by our politics or our dogmatism. That sounds a lot like something Cupich once wrote. “Ultimately,” he said, “it is only the witness who convinces people, not the teacher.” Chicago is the new testing ground for this proposition.