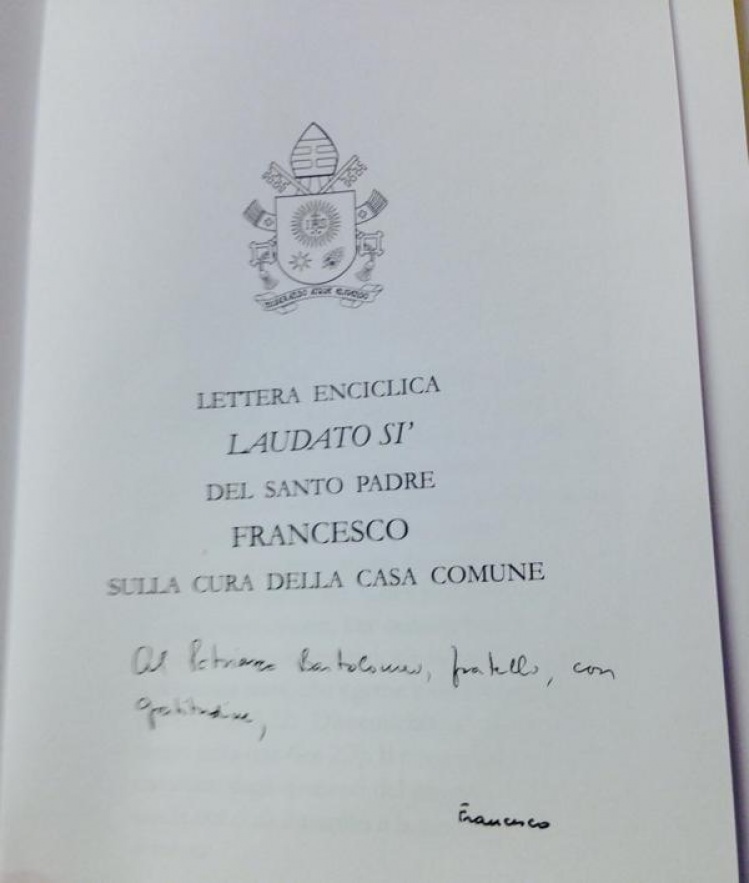 Laudato Si' offers two long-lasting gifts to the church. Through the body of the text, Francis first exhorts us to examine and renew our commitments to God, one another, and "our common home" on earth through an "integral ecology." But the footnotes of the text tell another story, related but distinct from the first. Francis has shown how the Pope can honor and foster collegiality and synodality among the world's Christian leaders.

Those aren't household words, but the concepts are simple enough. Collegiality refers to "the Pope governing the Church in collaboration with the bishops of the local Churches, respecting their proper autonomy."  Synodality is "the practical expression of the participation of the local Church in the governance of the universal Church, through deliberative bodies."

The extent to which Francis manifests these concepts in Laudato Si' is breathtaking. He cites seventeen different bishops' conferences or regional meetings (some of them more than once) from six continents. In order of appearance, they represent: Southern Africa, the Philippines, Bolivia, Germany, Argentina, the United States, Latin America and the Caribbean, Canada, Japan, Brazil, the Dominican Republic, Paraguay, New Zealand, the Federation of Asian Bishops' Conferences, Portugal, Mexico, and Australia.

Most of these speak from the southern hemisphere, the so-called "Global South." You know, where two-thirds of the world's Catholics live. Most of these regions became Catholic through colonial expansion and have been marginalized with respect to church governance. But today, on a matter of ultimate, existential concern, their voices were lifted up as exemplary and authoritative.

The form of this argument, which is groundbreaking enough, also bolsters the content of the encyclical. That is to say, the contrapuntal lamentation to which Francis responds -- the "cry of the poor" and the "cry of the earth" (49) -- comes primarily from the Global South. The pairing was expressed most poignantly in Brazilian theologian Leonardo Boff's Cry of the Earth, Cry of the Poor. But it resounds throughout the many bishops' conferences cited by Pope Francis, and most clearly in the section on "Global Inequality" (48-52).

"A true 'ecological debt' exists, particularly between the global north and south, connected to commercial imbalances with effects on the environment, and the disproportionate use of natural resources by certain countries over long periods of time. The export of raw materials to satisfy markets in the industrialized north has caused harm locally." He then quotes the Bishops of the Patagonia-Comahue Region, who "note that often the businesses which operate this way are multinationals. They do here what they would never do in developed countries or the so-called first world." If North American and European Christians hadn't yet heard such cries from the margins of power, we can no longer claim ignorance. Francis has amplified the voices of the Global South through the megaphone of papal authority.

Francis's sense of collegiality also extends to the eastern Orthodox churches, continuing his predecessor's mission to renew relations with these ancient partners. In September 2013, he explained to America magazine:

We must walk together: the people, the bishops and the pope. Synodality should be lived at various levels. Maybe it is time to change the methods of the Synod of Bishops, because it seems to me that the current method is not dynamic. This will also have ecumenical value, especially with our Orthodox brethren. From them we can learn more about the meaning of episcopal collegiality and the tradition of synodality. The joint effort of reflection, looking at how the church was governed in the early centuries, before the breakup between East and West, will bear fruit in due time. In ecumenical relations it is important not only to know each other better, but also to recognize what the Spirit has sown in the other as a gift for us.

Francis brought the seed of that idea to fruition this morning at the encyclical's release. Not only did he quote Patriarch Bartholomew amply in the encyclical's opening, but he also welcomed Metropolitan John of Pergamon, peerless Orthodox theologian, as the Patriarch's representative. And to whom did he personally dedicate the encyclical with his own hand this morning? His fratello, Patriarca Bartolomeo, con gratitudine.

Pope Francis indeed started a small earthquake in the church today. Did you feel it? The axis of the church tilted a bit -- to the south, and to the east.

Plutocracy in action: the FAA vs. National Parks