Pope Francis to Congress: Be Your Best 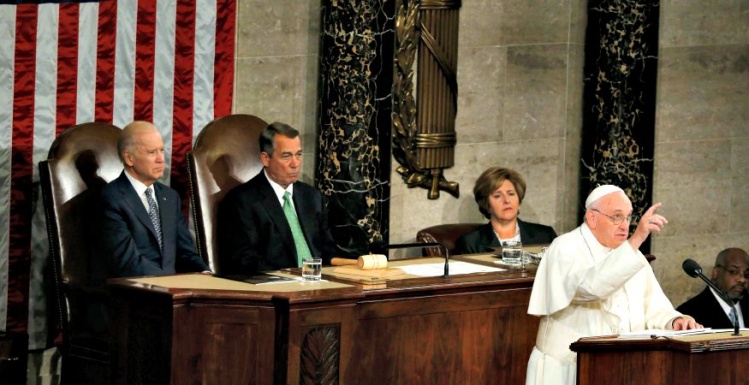 This morning Pope Francis delivered a stirring address to the U.S. Congress—the first of its kind—in which he carefully, but firmly urged legislators to draw on the rich history of this nation to build up the common good. Largely avoiding the harsh rhetoric he cautioned bishops against yesterday, he prodded America to remember what has made it great: welcoming the stranger, cooperating with those of diverse commitments, working toward the common good. Ensuring the commonweal “is the chief aim of all politics,” according to Francis, who once weighed a career in political life. He acknowledged that defending the dignity of all, working to ensure the well-being of all citizens, especially “the most vulnerable,” is not an easy task. Yet, he continued, that is the responsibility, indeed the vocation, to which every lawmaker is called. This was a speech of fundamental ideas—of political theory, of anthropology, of theology. But it was anything but airy. Francis talked in specifics. He talked immigration, he talked capital punishment, he talked arms control, he talked climate change.

The pope’s audience, however, was not limited to those in the room. He characterized his message as an invitation to enter into a dialogue with all Americans: the elderly who, while retired, “keep working to build up this land”; the young, who strive to “realize their great and noble aspirations” yet face “difficult situations”; and everyday workers, who labor not simply “to pay their taxes,” but “in their own quiet way…generate solidarity.”

Francis used the stories of four great Americans to drive home his message of solidarity with the planet and all its people: Abraham Lincoln, who defended liberty; Martin Luther King (who featured in Francis’s address at the White House), who sought to ensure the “full rights for all [our] brothers and sisters”;  Dorothy Day, who devoted her life toward “the cause of the oppressed”; and Thomas Merton, who serves as an example of our “capacity for dialogue and the United States.”

“Our world is increasingly a place of violent conflict, hatred and brutal atrocities, committed even in the name of God and of religion,” Francis said. “We know that no religion is immune from forms of individual delusion or ideological extremism.” For Pope Francis, extremism can take many forms. This means that we must work to effect a balance between combating violence committed “in the name of a religion an ideology, or an economic system,” and protecting religious liberty, intellectual liberty, and individual liberty. Francis also cautioned against seeing only the good and the evil, the righteous and the sinner. Giving in to that temptation means giving up on dialogue. “We know that in the attempt to be freed of the enemy without, we can be tempted to feed the enemy within,” Francis said. “To imitate the hatred and violence of tyrants and murderers is the best way to take their place.”

Global crises require global cooperation. “Even in the developed world, the effects of unjust structures and actions are all too apparent.” Addressing them demands rejecting “every form of polarization” and “moving forward together as one” in a fraternal spirit “cooperating generously for the common good.” Francis praised the many religious denominations that have contributed to this effort. And so it remains “important today” that “the voice of faith continue to be heard.” For Francis, politics is, in a final sense, an act of solidarity, of cooperation, of sacrifice—of giving up “particular interests in order to share, in justice and peace, [a people’s] goods, its interests, its social life”—all for the good of the person. “If politics must truly be at the service of the human person, it follows that it cannot be a slave to the economy and finance.” (Francis dropped this line in his address, but Holy See spokesman Fr. Federico Lombardi later explained that it was not intentionally omitted.)

Citing the example of Martin Luther King’s dream of full civil rights for African Americans, he reminded Congress that we must not fear foreigners, because most of us came from foreigners. He recalled the suffering of Native Americans, whose rights were “tragically” disrespected, yet noted that it is “difficult to judge the past by the criteria of the present.” And then he turned to the present.

“When the stranger in our midst appeals to us, we must not repeat the sins and the errors of the past. We must resolve now to live as nobly and as justly as possible, as we educate new generations not to turn their back on our ‘neighbors’ and everything around us.”

On this continent, too, thousands of persons are led to travel north in search of a better life for themselves and for their loved ones, in search of greater opportunities. Is this not what we want for our own children? We must not be taken aback by their numbers, but rather view them as persons, seeing their faces and listening to their stories, trying to respond as best we can to their situation. To respond in a way which is always humane, just and fraternal. We need to avoid a common temptation nowadays: to discard whatever proves troublesome. Let us remember the Golden Rule: “Do unto others as you would have them do unto you” (Mt 7:12).

For Francis, this is an issue of fairness, of justice.

From that reference to abortion, the only of the speech, Francis turned to renew his call to abolish the death penalty, offering his endorsement of the U.S. bishops’ efforts to end capital punishment. Capital punishment forecloses hope. “I also offer encouragement to all those who are convinced that a just and necessary punishment must never exclude the dimension of hope and the goal of rehabilitation.”

Next, Francis held up the example of Dorothy Day, praising her “passion for justice and for the cause of the oppressed.” In what seemed a response to critics who claimed Francis had not given capitalism its poverty-fighting due, he praised the work that has been done to lift people out of extreme poverty. Yet “much more needs to be done.” We must never forget our neighbors who are “trapped in a cycle of poverty.”

Again, appearing to respond to conservatives who complained that Francis failed to properly understand the wonders of capitalism, the pope praised business as a “noble vocation” that “can be a fruitful source of prosperity,” especially when it comes to “job creation.” What few in the room probably realized was that Francis was quoting himself. Those passages appear in Laudato si’.

But then he mentioned it explicitly, citing a series of passages calling for the people of the world to “redirect our steps” and address the threats to our environment. “Now is the time” for courageous action to fight poverty, for “restor[ing] dignity to the excluded,” for planetary care. Sounding nothing like the doom-and-gloom pope his conservative American critics have accused him of being, Francis offered words of encouragement and hope: “I am confident that America’s outstanding academic and research institutions can make a vital contribution in the years ahead.”

Finally, Francis brought Merton into the conversation, hailing him as a man of prayer, a man who challenged the status quo, and, perhaps most important, a man of dialogue. Obliquely referring to Cuba, he said, “When countries which have been at odds resume the path of dialogue—a dialogue which may have been interrupted for the most legitimate of reasons—new opportunities open up for all.” This too requires courage. “A good political leader always opts to initiate processes rather than possessing spaces.” This pope of process pressed his audience to take up the task of ending armed conflicts across the globe. Why, he asked, are weapons sold to those we know will use them to “inflict untold suffering”? “Sadly, the answer, as we all know, is simply for money: money that is drenched in blood, often innocent blood.” He continued: “In the face of this shameful and culpable silence, it is our duty to confront the problem and to stop the arms trade.”

Francis concluded with the reason he came in the first place: the World Meeting of Families. He urged Congress to support the building of families, because the family itself is threatened “perhaps as never before.” “Fundamental relationships are being called into question, as is the very basis of marriage and the family.” (That was his sole reference to gay marriage.) What’s more, the culture now “pressures young people not to start a family” because the future looks too uncertain, while simultaneously offering “so many options” that family life looks unappealing.

A nation can be considered great when it defends liberty as Lincoln did, when it fosters a culture which enables people to “dream” of full rights for all their brothers and sisters, as Martin Luther King sought to do; when it strives for justice and the cause of the oppressed, as Dorothy Day did by her tireless work, the fruit of a faith which becomes dialogue and sows peace in the contemplative style of Thomas Merton.

The feeling is mutual.