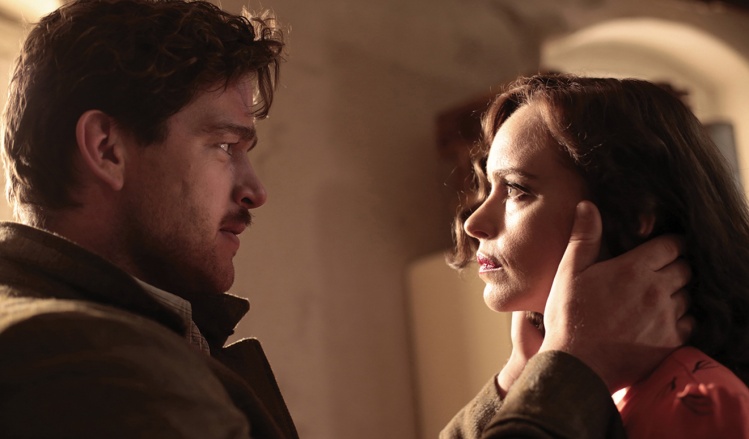 There can be no poetry after Auschwitz, philosopher and social theorist Theodor Adorno famously asserted. Yet there are movies, and plenty of them. Cinematic approaches to the Holocaust have ranged from documentaries, beginning with the concentration-camp footage shot by Allied troops and continuing through Claude Lanzmann’s Shoah, to action films such as Escape from Sobibor, the terse courtroom drama of Judgment at Nuremberg, domestic dramas like Sidney Lumet’s The Pawnbroker or Costa-Gavras’ Music Box, Roberto Benigni’s whimsical tragicomedy Life Is Beautiful, and much more in between. Now, in Phoenix, director Christian Petzold applies the chiaroscuro of film noir to the moral abyss of German anti-Semitism. There may be no poetry after Auschwitz, but there is melodrama.

Phoenix explores questions of complicity and reckoning in the daily workings of the Holocaust. Who was guilty, and of what; who will be called to account—and how? Such questions invoke two whopping terms Germans used in addressing their own burden of guilt in the decades since the war: Wiedergutmachung (reparations) and Vergangenheitsbewältigung. The former comprised mainly government payouts, while the latter, meaning literally “the overcoming of the past,” has denoted the ongoing efforts of professors, writers, and other public intellectuals to probe the sins of Nazism—and to atone for them. Yet these were collective political efforts, mediated by large government institutions and articulated by elites, and not a matter of individual reckoning. Public penance, private silence: postwar Germany proceeded by an unspoken bargain that let the man in the street off the hook—much to his relief. Phoenix takes us to Stunde Null, the zero hour at war’s end, to investigate individual guilt and put that man back on the hook.

It does so via a novel conceit. The film (co-written by Petzold and the late Harun Farocki, from a novel by Hubert Monteilhet) takes place mere months after war’s end in the bombed-out Berlin of 1945, where laughing American GIs roam the streets as German civilians flit like ghosts amid the ruins. One ghost is Nelly Lenz (Nina Hoss), a former cabaret singer who is also a Jew and Auschwitz survivor. Having been shot in the face in the closing days of the war, she is under the care of her best friend and fellow Jew, Lene (Nina Kunzendorf), and of a surgeon who undertakes her facial reconstruction. Following surgery, Lene plans for both women to emigrate to Palestine, but Nelly demurs. Her non-Jewish husband, a jazz pianist named Johannes—Johnny, she calls him—is out there somewhere, and she intends to find him. Lene tries to deter her, informing Nelly bitterly that Johnny is the one who betrayed her to the Nazis. Refusing to believe it, Nelly tracks him down to a club where he is working as a busboy.

But there’s a problem. After the surgery, Nelly looks different—and Johnny, believing his wife dead, doesn’t recognize her. He does, however, note a strong resemblance; and in a scheming attempt to pry his wife’s estate from the Allied military bureaucracy, he asks her to imitate his wife, stage a dramatic return, claim the inheritance, and split it with him. This will mean reuniting the faux Nelly (really a faux-faux Nelly) with their old friends—a task he undertakes to prep her for. And so Johnny begins a Pygmalion-like makeover, teaching Nelly to dress, use makeup, walk and talk like herself, while filling her in on biographical information she’ll need in order to pass muster with friends.

The basics of this plot conceit don’t withstand a lot of scrutiny, and if you’re the kind of moviegoer who asks, “Would she really ______?” or “Wouldn’t he notice ______?”, you’re liable to experience scratchy annoyance at Phoenix’s implausibility. But Petzold is after truths beyond realism. The ironies of his film start with its title, which signals a Germany rising from the ashes even as its Jewish protagonist does likewise: perpetrator nation and individual victim, conjoined in assaying new identities. But how, exactly, does one become a new person? Before performing her facial reconstruction, the surgeon shows Nelly various facial features modeled on movie stars, telling her that “a new face is an advantage.” When Nelly responds that she only wants to be her old self, he warns her that that’s not going to be possible. His comment hints at a break from the past so traumatic—at one point Nelly speaks about her prewar self in the third person—that it borders on mental illness. Then there’s the question of the moral identity of Johnny. Who was he, who is he, in relation to Nelly?

PHOENIX IS BOTH engaging and taxing; the structural dramatic irony Petzold sets in place make you double-track your way through, assessing how Nelly understands what is going on versus how Johnny does, even as you try to take in still other, larger levels of meaning. In one scene, as Johnny rehearses Nelly for her encounter with their friends, she insists that they’ll ask her about the camps, and that she should be ready—and recounts to him a heartrending story about a child clinging to its mother’s dress. While we register the beating heart of Nelly’s suffering, at the same time we’re busy gauging both Johnny’s quizzical reception of the story and Nelly’s tactical motives in offering it up in the first place—even as we register the penetrating judgment Petzold delivers via Johnny’s reassurance that “nobody will ask you about the camps,” cueing up the historical theme of postwar German silence about genocide.

Such complications sink us deep in the interpretive weeds, and at times I wasn’t sure whether the film’s structural irony bolstered its impact or vitiated it, keeping us at a distance from emotions pooling beneath the surface of its dramatic confrontations. And yet I found the closing scene entirely shattering. Petzold keeps the film’s impact dammed up and then, once the dam is breached via the inevitable moment of unveiling and comeuppance, lets it come pouring forth in a cascade of anguished recrimination and guilt.

In determining where Phoenix takes aim, it helps that Johnny is essentially likable, a handsome, fun-loving musician (the actor, Ronald Zehrfeld, resembles the young Ernest Hemingway) who mixes easygoing amiability, romantic flair, and casual opportunism. He’s no better or worse than the next person, in other words—which is very much the point. This is expressly not a film about Nazis. In German terms, Phoenix addresses not the culpability of the Täter, the chief perpetrators of evil, but rather the Mitläufer, those who went along with it; not the symphonic villainy of a Himmler or Goebbels, but the situational venality of a neighbor, say, who denounces a Jew because he wants his apartment. It is significant that Johnny is still scheming; his plot to secure his wife’s inheritance mirrors the casual opportunism that was atrocity’s daily m.o. all across the Nazi realm. Is Johnny an evil person? Disguised as a simulacrum of herself, Nelly is able to probe her husband’s actions, intentions, and sympathies; in doing so, she acts on behalf of all of us, and of history itself, spying into the one place where Nuremberg and other tribunals could not go—the heart of the average German.

Petzold gives Phoenix the form of a mystery, deploying elements of noir—mistaken identity, a woman in pumps and bright red lipstick, a haunting cabaret ballad, a train platform at night—in a radically different context, with horror substituting for dark glamour. The noirish touches jive grotesquely with Holocaust tropes, so that a locomotive billowing steam on a dimly lit platform at night, and the piercing shrill of a train whistle, at once evokes such films as Brief Encounter—and also the cattle cars bearing their awful cargo to Auschwitz. And in Nelly we have a femme fatale who is not so much fatale as half-dead, traumatized beyond measure and perhaps beyond healing.

What is the function of a film exploring Holocaust guilt at this late date? Like the recent spate of Nazi-related trials in Germany—trials of senescent nonagenarians who were very minor players in genocide—Phoenix reflects broad awareness, and perhaps anxiety, that the last eyewitnesses are dying out, cueing up the moment in which knowledge of the Holocaust passes from lived experience into the more abstract orderings of history. All Germans now benefit from what Helmut Kohl indelibly called “the mercy of the late birth,” and one senses that Petzold wants to leaven this mercy with hard truth-telling. According to Holocaust legal scholar Lawrence Douglas, postwar Germany has been “the poster boy for national self-reckoning, the rare instance of a land willing to face down its monstrous history.” Phoenix revisits that monstrousness while it was still fresh, reminding us that atrocity was not simply enforced from afar, by the fiat of a madman, but enacted through intimate betrayals carried out by one’s friend, one’s neighbor, or even one’s husband.

Please email comments to [email protected]ine.org and join the conversation on our Facebook page.