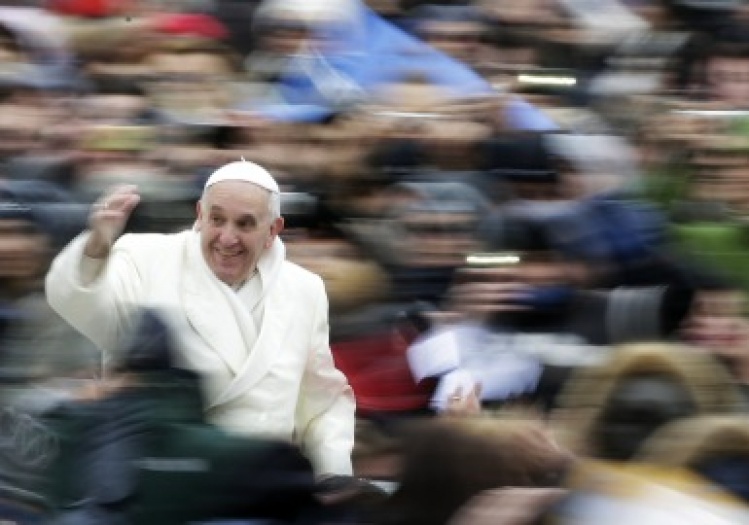 Pope Francis’s recently released apostolic exhortation, Evangelii Gaudium, is a 47,500-word pep talk. It is sometimes severe and demanding, sometimes consolatory, but all of it is intended to motivate. In other words, it is exactly as advertised: an exhortation.

Francis wants to remind us that the church derives its whole identity from its mission to preach the gospel and to do so joyfully. This means that all Catholics, whatever their particular vocations, should understand themselves as missionaries. Most important, in order to share God’s mercy with a suffering world, Catholics must not allow their own sufferings to rob them of joy or apostolic vigor. Despite Francis’s characteristically upbeat tone, there is a suggestion of exasperation with those he describes, in the English translation, as “sourpusses.” He cautions against a “tomb psychology” that “slowly transforms Christians into mummies in a museum.” He does not quote St. Francis de Sales’s famous maxim “A sad saint is a sorry saint,” but he might have. If Christians really are people who have been liberated by God’s mercy, then, Francis insists, they should act as though they have been liberated. If their faith itself seems to be a source of sorrow, they are a “counter-witness” to the promises of the gospel.

The differences between Francis and Benedict have been somewhat exaggerated in the press (almost always at Benedict’s expense), but the exhortation does signal a real contrast of emphasis between the two popes. Benedict foresaw the possibility that the church might grow smaller; and, while he did not greet this prospect eagerly, he did speculate that a smaller church might turn out to be a purer one. Francis generally seems less concerned with moral relativism outside the church than with worldliness within it. He rejects the notion that the church is an exclusive club for the preservation of moral purity and traditional piety, and wants the church to be open to as many people as possible. “For if we have received the love which restores meaning to our lives, how can we fail to share that love with others?” Evangelization is not simply one of the church’s functions; it is its raison d’être. The church exists to evangelize.

The element of the exhortation that has grabbed most of the headlines is the pope’s sharp criticism of unregulated capitalism. Francis says he wants a church that is poor and for the poor. And to be for the poor is, in his judgment, to be against any social structure or ideology that deprives poor people of what they need and deserve as human beings. Some may worry that the exhortation’s critique of global capitalism is excessively antagonistic or rhetorically self-indulgent. But the pope has at least made it difficult for his judgments to be misrepresented by those who would rescue the church from social teachings they find embarrassing or inconvenient. Francis brushes aside the shibboleths that are supposed to justify the economic policies of much of the developed world. “Some people continue to defend trickle-down theories which assume that economic growth, encouraged by a free market, will inevitably succeed in bringing about greater justice and inclusiveness in the world,” he writes. “This opinion, which has never been confirmed by the facts, expresses a crude and naïve trust in the goodness of those wielding economic power and in the sacralized workings of the prevailing economic system.”

Until recently, the Catholic debate about political economy has mainly been about how best to interpret the church’s teachings, with many Catholics on the right arguing that the modern church favors a laissez-faire capitalism softened only by a few modest welfare programs and private charity, while Catholics on the left insist that the church has been skeptical of capitalism all along and has always taught that distributive justice was one of the main responsibilities of government. Now, after Benedict’s encyclical Caritas in Veritate and Francis’s exhortation, the debate is no longer about what the church teaches, but about whether the church’s teaching about politics and economics is right or whether the church has any competence in this domain. At the same time, it is crucial to recognize that Francis’s argument isn’t just about ethics, economics, or political theory; it is also, and above all, about ecclesiology—that is, about how the church understands itself and what its mission entails. That doesn’t mean the church pretends to have the solution to every problem, nor does it mean that the Vatican thinks it can dictate economic policy. But it does mean, at the very least, that we should expect to hear more from this pope about the social perils of growing economic inequality. To be any kind of Christian means to imitate Christ, and to imitate Christ means to take the side of the poor. Or so, at least, says the new bishop of Rome.