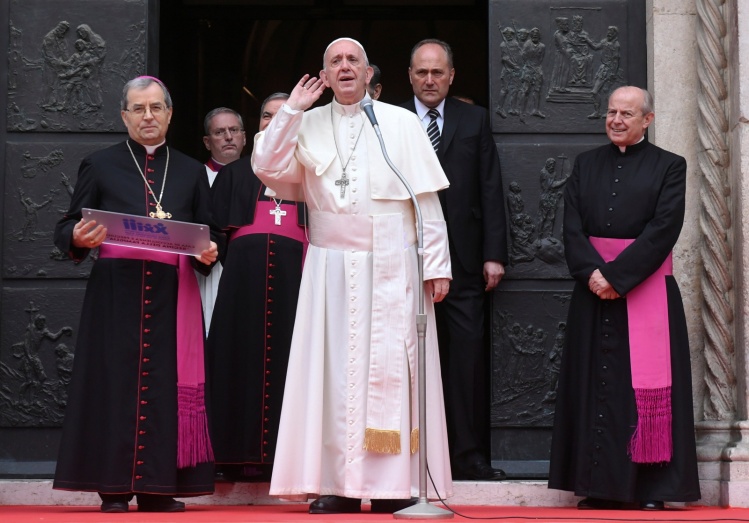 The heat that a group of conservative academics generated by publicly accusing Pope Francis of heresy this summerin a letter they released September 23 is warming up the Catholic environment for dissent. And in the end, the pope’s patience with critics like these could do a lot to reform the culture of the church. It is one more way Francis is sculpting the church that the Second Vatican Council envisioned.

I doubt it’s what his tradition-minded antagonists intended as they launched a publicity campaign against the pope over passages  in his document Amoris laetitia (The Joy of Love) that urge a more merciful approach to divorced Catholics. Nonetheless, they’ve taken up Vatican II’s call for the laity to speak up from areas of their competence—“permitted and sometimes even obliged to express their opinion on those things which concern the good of the Church,” as Lumen Gentium (37) puts it.

The conservative academics have posted to the web a carefully defined basis for their dissent:

Church law itself requires that competent persons not remain silent when the pastors of the Church are misleading the flock. This involves no conflict with the Catholic dogma of papal infallibility, since the Church teaches that a pope must meet strict criteria before his utterances can be considered infallible. Pope Francis has not met these criteria. He has not declared these heretical positions to be definitive teachings of the Church, or stated that Catholics must believe them with the assent of faith.

Voice of the Faithful has relied on the same canon law to buttress its right to question church authorities (in a much milder way).

Francis’s critics are well aware that previous popes have taken steps to stifle dissenting theologians, to the applause of trad Catholics.
sharetweet

Pope John Paul II cited that document occasionally. “Signs of division dull the power of the Church’s witness, whereas harmony increases her credibility,” he told Canadian bishops.  “It is incumbent upon Bishops, in communion with the Successor of Peter, to show that in their teaching they are ‘of one heart and soul" (Acts. 4: 32), ‘united in the same mind and the same judgment’ (1Cor. 1: 10).”  With the help of Cardinal Joseph Ratzinger, head of the Congregation for the Doctrine of the Faith, he took many steps to stop theologians from questioning church teaching publicly.

The duty of obedience to the pope and bishops was hammered at long and hard, to the point that pretty much any form of dissent was being portrayed as sinful.

For example, look up “dissent in the church” in EWTN’s online library on Catholic teaching and this is what you’ll find:

Francis has responded to the dissenting academics and their supporters in conservative Catholic media, but perhaps too gently for them to notice. La Civiltà Cattolica carried those remarks:

To understand Amoris Laetitia you need to read it from the start to the end. Beginning with the first chapter, and to continue to the second and then on … and reflect. And read what was said in the Synod.

I want to say this so that you can help those who believe that morality is purely casuistic. Help them understand that the great Thomas possesses the greatest richness, which is still able to inspire us today. But on your knees, always on your knees…

Cardinal Christoph Schönborn has made the case elsewhere at greater length, and that is where the debate is. Like his namesake saint, Pope Francis believes in the power of teaching by example. He is offering his critics a lesson in servant leadership—“always on your knees.” By generally tolerating voices of dissent, he is indeed bringing change to the Catholic Church—and his critics are helping him to do it.