America’s Worst Mass Shooting, Until the Next One 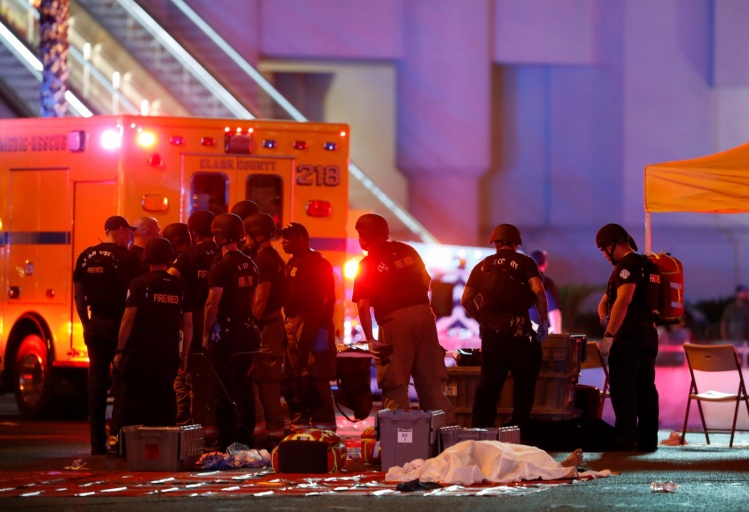 A body is covered with a sheet in the intersection of Tropicana Avenue and Las Vegas Boulevard South after the Oct. 1 mass shooting at a music festival on the Las Vegas Strip. (CNS photo/Steve Marcus, Las Vegas Sun)

This morning I brought my sixth-grade daughter’s trumpet to her school—she had forgotten it—where I saw that the flag was already flying at half-mast in honor of the victims of last night’s mass murder in Las Vegas.

I live in Connecticut, just half an hour from Sandy Hook, where five years ago Adam Lanza burst into a first-grade classroom and slaughtered twenty children. My daughter was in first grade then, the same age as those kids, which made the horror of that day extra-real to me. Maybe that’s why I never feel as gloomy about America as I do in the aftermath of a mass shooting, when again and again we confront our failure even to try to do something to prevent it.

I last wrote on this topic two years ago today, after a student shot and killed nine classmates at Umpqua Community College in Oregon. I will confess that I just now had to google that event; and the fact that I had forgotten all about it provides trenchant evidence of how routine these events have become. But I do recall how writing about that shooting two years ago brought back the hopelessness of Sandy Hook. “If the wanton slaughter of five and six-year-olds can’t spark productive revulsion,” I asked then, “what possibly can?”

Anyone who sallies forth into the public domain in hopes of persuading Americans to bolster gun regulation will have to tangle with the cynical but tightly held mantra that “It’s not guns who kill people, it’s people who kill people.” Well. The horror of Las Vegas calls to mind the actions of Charles Whitman, the ex-army sniper who in 1966 locked himself in the clock tower of the University of Texas and began firing on students below. The most notorious mass murderer of his era, Whitman killed sixteen people and wounded thirty more; as of now, Stephen Paddock’s tally stands at fifty-eight killed and five hundred wounded, and these numbers will surely rise.

Yes, people kill people; and the capacity for moral and psychological derangement that makes such horrors possible reflects an abiding potential for evil in man. But even as that potential persists, the potential of the weapons available for enacting it grows and grows, magnifying the horror. Instead of Whitman’s hunting rifle, we now contend with Paddock’s automatic weaponry, multiplying the carnage via a remorseless, high-frequency rat-a-tat-tat that makes videos of the killing sound like reports from a war zone. This morning I listened to a guy call in to NPR—a gun-owner and former Army infantryman from Vermont (a big gun state)—and make the point that “there’s only one reason these weapons exist, and that’s to kill masses of people.” He was emphatic about the absurdity of having such weapons in the hands of anyone other than the military. “There’s no way that should be allowed in a civilized country.”

I agree. And to those who insist that any attempt to limit the types of weapons Americans can carry is an infringement on their constitutional rights, I’d ask, well, then how about a shoulder-fired rocket launcher? How about a bazooka? The reality, of course, is that we already do limit the kinds of weapons Americans may own; and doing so is not only permissible within the context of maintaining a constitutional right, but necessary. In fact it is still unclear exactly what kind of gun Paddock was using. Was it a fully automatic weapon? (Their production was banned in the mid-1980s, but already existing ones can still be sold, albeit expensively.) A semi-automatic weapon that he had modified? An illegal purchase? Fully automatic weapons are said to be not all that easy to get hold of. Yet if you google “Las Vegas” and “fully automatic weapon,” the first entry you get is “Stephen Paddock”—and the second is for a shooting range called “Battlefield Vegas,” with the following breathless enticement: “Offering over 400 full auto machine guns, Battlefield Vegas is the best indoor shooting range experience in Las Vegas! Call for your free hotel shuttle pick up.”

This morning, that last line could hardly have a more ominous ring.

The huge elephant in the room is that we have a dire gun-violence problem in this country.
sharetweet

The huge elephant in the room is that we have a dire gun-violence problem in this country. Which leads me to President Trump’s reaction this morning. I find it almost uncanny, his aptitude for producing the exact opposite of real leadership. This is a president who’s routinely angry when he needs to be statesmanlike; and now, when he should be outraged, he plays the calming consoler-in-chief. His message to America, which his supporters will surely laud as “presidential,” was in fact a smooth act of misdirection. In carefully practiced, soothing tones, Trump sought to comfort those “mourning the sudden loss of a loved one,” stating that “we ask God to help see you through.” Regarding the rain of gunfire that poured down from the Mandalay Hotel, he observed that “though we feel such great anger at the senseless murder of our fellow citizens... [and] we are searching for some kind of meaning in the chaos, the answers do not come easily.”

This is language suitable to the victims of hurricanes, earthquakes, or other natural catastrophes. But the catastrophe wrought by Stephen Paddock was no natural catastrophe—rather, it is a result of political, cultural and commercial realities with implications for all Americans, and not least our political leaders and legislators. By summoning the spiritual language we apply to acts of God, Trump steered our attention away from the acts of man, and from answers that do come easily. As a rhetorical strategy it is an act of prestidigitation calculated to make that very large elephant vanish before our eyes.

The NRA and its quislings and true believers will no doubt hurry to say, Lets not politicize American’s grief. Wrong! We need more politics here, not less. In contrast to President Trump’s evasions, I stand behind our Connecticut senator, Chris Murphy, who this morning issued a blunt statement. “This must stop,” Murphy wrote. “It is absolutely infuriating that my colleagues in Congress are so afraid of the gun industry that they pretend there aren’t public policy responses to this epidemic.” And: “It’s time for Congress to get off its ass and do something.”

After that shooting in Oregon two years ago, President Obama vowed that “each time this happens, I’m going to bring this up. Each time this happens, I’m going to say that we can actually do something about it.” President Trump offered Americans his and Melania’s prayers. But when prayer is used to spur passivity, when it becomes a means of pre-empting legitimate political anger, then prayer is corrupted. Please, no more thoughts and prayers. Instead, do something.

And if we don’t? As I saw that lowered flag this morning, I had the grim and abject thought that maybe we should just keep it that way. Because one thing we can be sure of is that the next mass shooting is already locked and loaded.