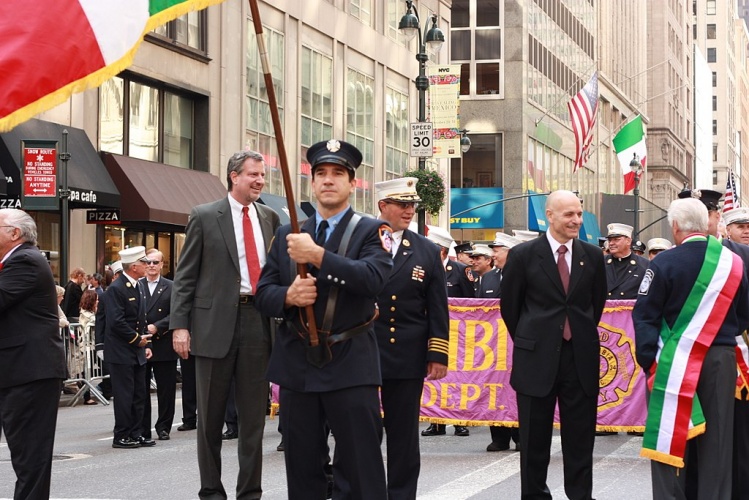 I’ll be marching in New York’s Columbus Day Parade this year in honor of Cristoforo.

Cristoforo Colombo, yes, but also my grandfather Cristoforo Moscato, who migrated to New York in 1902 from Cerasi, a picturesque but very poor village in the Aspromonte mountains of Calabria. I don’t know if he thought of the other Cristoforo as he made his own way across the ocean blue, a stowaway according to family lore. I never met him; he died the year before I was born.

But I know from the study of history that he was among the mass of deeply impoverished southern Italian immigrants whom some of the supposed great minds of the day—leading academics and policy makers among them—considered to be genetically inferior.

The writings of Edward Alsworth Ross, a noted economist who became president of the American Sociological Association, offer a good window into the bogus, self-serving academic theories Italian immigrants had to overcome. He wrote, for example:

That is, he is arguing, the shapes of their heads made them inherently undesirable. He went on to describe many of the newcomers as:

hirsute, low-browed, big-faced persons of obviously low mentality…. They simply look out of place in black clothes and stiff collar, since clearly they belong in skins, in wattled huts at the close of the Great Ice Age. … To the practiced eye, the physiognomy of certain groups unmistakably proclaims inferiority of type.

Ross coined the term “race suicide,” which amounts to a white-supremacist call to action. It meant that Americans were surrendering to the immigrant tide: “The higher race quietly and unmurmuringly eliminates itself rather than endure individually the bitter competition it has failed to ward off from itself by collective action,” as he said in his address “The Causes of Race Superiority” at the Fifth Annual Meeting of the American Academy of Political and Social Science in 1901.

According to Ross, “That the Mediterranean peoples are morally below the races of northern Europe is as certain as any historical fact.” Not only were they morally inferior, he contended, but they were ugly: “One sees no reason why the Italian dusk should not in time quench what of the Celto-Teutonic flush lingers in the face of the native American.” He predicted “an early falling off in the frequency of good looks in the American people.”

Such creepy eugenicist ideas were taken seriously: They were the intellectual foundation for the movement toward legislation passed in 1917, 1920 and 1924 with the aim of stopping the southern and eastern European migration.

Italian immigrants did not have distinguished professors jumping up to defend them against this hateful pseudo-science. But they and their defenders did have Dante. They had Michelangelo. They had Leonardo da Vinci. And they had Cristoforo Colombo.

Here was evidence that Italians were not a sub-human people.
sharetweet

Here was evidence that Italians were not a sub-human people. And how could the Italians’ detractors argue that they were incapable of assimilation and unworthy of American citizenship if the European discoverer of the Americas were Italian?

Those who challenged the nativist fury of the early twentieth century put Columbus to work in their rhetoric.

It was especially necessary whenever nativist passions surged, such as when respectable people across the country applauded the New Orleans mob that lynched eleven Italians after they were acquitted in 1890 in the slaying of the police chief. “If the verdict had been acquiesced in by the people of New-Orleans, their acquiescence would have shown that there was not power and virtue in the community,” The Times editorialized. Theodore Roosevelt wrote that he had met some “dago diplomats” who objected to the lynching, and told them that “I think it rather a good thing.”

A writer for the Chicago-based journal The Open Court invoked Columbus in this 1891 response:

If those eleven prisoners had been Anglo-Saxons, charged with killing an Italian, there would in all probability not have even been a mob. We honor Columbus and Dante, Raphael and Michael Angelo [sic], Cavour and Garibaldi. Is it not possible that the nation which produced them can send us men worthy of a place among us? The charge that Italians are prone to crime is fully off-set by a second accusation, namely, that they, like the Chinese, are too thrifty and saving to be allowed to compete with Americans. A thrifty class is not a criminal one, and no residents of our northern cities are more thrifty, and at the same time more obedient to the laws, than the compatriots of Columbus.

Another example of Columbus-to-the-rescue came in a 1912 congressional debate over passing a literacy requirement for immigrants, an effort to stop the Italian migration.  (It ultimately passed in 1917.) A congressman from Massachusetts— James Michael Curley, later the mayor of Boston—chastised a Texan who’d trashed the Italians:

Those whom you term the representatives of a despised race and you claim are unassimilable stand predominant among all the races of the entire world. Is it undesirable to perpetuate the blood, the memorials, and the traditions of the greatest Empire of antiquity, which spread the light of its civilization from the Mediterranean to the North Sea and the Baltic? Do the gentlemen who cast the stigma upon Italians recall that this stock was the fountainhead of the Renaissance that dispelled the gloom of the Middle Ages? What authority proscribes the land that gave birth to Galileo, the most forceful demonstrator of the earth’s motion and orbit, or decries the achievements of Columbus and the Cabots, who brought an unknown world to light, to redress and restore the balance of the Old World? Strange is the flood of prejudice.

In a 1916 congressional debate, another member defended Italians by saying, “Will anyone claim that a race that has produced a Boccaccio, a Dante, a Michelangelo, a Columbus, a Cabot and a Caruso can not be assimilated?”

The nativist response was that northern Italians like Columbus were racially superior to the southern Italians who predominated in the migration. You could look it up in Professor William Z. Ripley’s 1899 book “The Races of Europe: A Sociological Study,” which maps the “cephalic index” of Europe. Southern Italians’ heads were too long for Ripley, their hair too dark and their height too short—“especially is this true in the mountains of Calabria,” he wrote. The U.S. Immigration Commission, which issued reports that catalyzed anti-immigrant legislation, called his work “masterful.” Ripley eventually became a professor of economics at Harvard.

Ultimately, the deck was stacked against those who defended the Italian migration. But there was still Columbus, and the annual parade in his honor really said, through all the flowery and perhaps not very historical praise heaped on the navigator: We’re as good as anyone else. Maybe better.

When the big day arrived, Wall Street and the banks closed. (Department stores began offering special sales.) “While the name Christopher Columbus was occasionally mentioned by other nationalities in the course of the day, Cristoforo Columbo was on every Italian tongue, and his praises were sung without stint,” The New York Times reported after the 1910 parade.

Of course, much has changed over the years. Indigenous peoples, who have more of a voice in the public square, have pointed out historical injustices that Columbus’s arrival brought on—slavery and death on a large scale. Those injustices were known even when America enthusiastically celebrated the 1892 quadricentennial of Columbus’s arrival in the New World. But a new understanding of human rights and the harmful impacts of colonialism provides a much different perspective, as does new scholarly research. So does local politics: Italian Americans are no longer so potent a political force in big cities, and politicians see little to be gained in defending a holiday that newer constituencies feel is a celebration of their ancestors’ oppressors.

While much has changed since the early twentieth century, our historical moment has parallels to those years when nativists succeeded in painting Italians and other immigrant groups as too poor, too dangerous, too defective to become productive American citizens. In today’s rhetoric about immigrants and refugees, we hear too many echoes of the century-old debate over Italian migration to ignore the reasons that Italians so embraced Columbus. It’s a day for immigrants. In that spirit, I will walk for Cristoforo.