By Dorothy Day
Environment
From the Archives
Spirituality 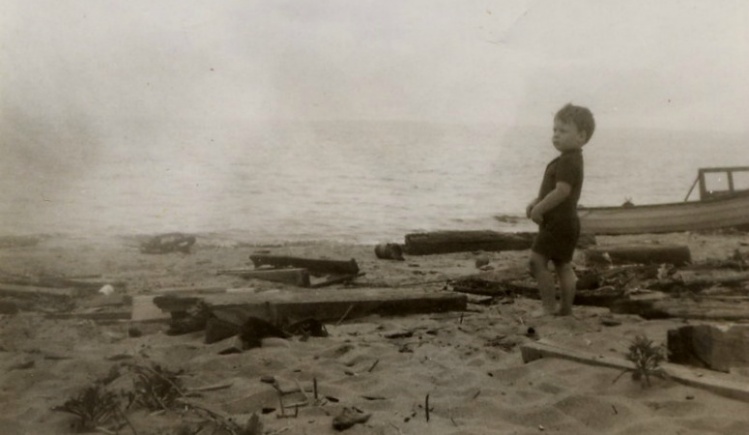 For two long summers I have been away from my little house on the shore of the island. We had rented it to friends and had gone traveling and working elsewhere. Now we are home again, Teresa and I, to find the garden overgrown with weeds, my perennials strangely distributed around the neighborhood and no longer in my own flowerbeds, fish-lines and ten-foot poles strung around the room, a box of dead and dried worms and clams left under a couch on the back porch, and fish-hooks stored on the little shelf over the door where a cross used to be and where now a giant spider crab hangs on the wall.

The crucifix had been moved and hung in the attic, which Teresa and I make our sleeping quarters, and in the bustle of spring cleaning and home-coming I did not transfer it to its usual place for some weeks. In those weeks the rain poured down, the wind howled dismally around the house, I sprained my knee digging clams, Teresa had another attack of malaria, I was tormented with poison ivy, three short stories were turned down by magazines and in general life was dismal.

One evening as Teresa was getting ready for bed and knelt to say her prayers, she turned around to the shelf over which the ugly, but biologically interesting, specimen hung.

“There is no cross there,” she said, “so I'll just say my prayers to the spider crab.”

Then and there we delayed the going to bed until the shelf had been nicely dusted, a little rose-studded shawl from Mexico hung over it, and the crucifix brought down from the attic and a few hyacinths from the garden placed in front of it.

We both slept very well that night, in spite of the howling of the wind which sounded like devils battering against the little house. I can laugh at myself for my Irish forebodings, but I believe in devils as I do in angels. I have heard them before in the gloomy melancholy of the wind and have felt that I have had a glimpse of hell in a sudden knowledge of the horror of the absence of God. I have felt a devil in the shape of a little fly which buzzed about my ear as I walked two miles home on a hot summer afternoon, after I had been gossiping with a friend about a neighbor.

But now with the spider crab hanging from a nail over the dining-room table in its proper place, the sun has come out, Teresa is better, my poison ivy is gone, my young brother has his first job on the country paper, I have been given work for the summer in the way of garden interviews, and life is serene and happy once more.

The island is ten miles long and four miles wide and, although there is a railroad running from one end of it to another, it would be necessary to walk miles and miles to interview the members of the horticultural clubs. So though my salary did not warrant it, I have bought myself a car. It is eight years old and it cost only $35.00. But with license plates, new tires, and the things that needed adjusting such as the carburetor, coils, wires, etc., I found that within a couple of weeks I had paid $75.00, all told. Now it is running smoothly and Teresa and I whirl around the country roads at a dizzying speed (twenty miles an hour) and stop off at old farmhouses and beautiful estates and dingy, little new houses and bright and shining new houses, and talk to their occupants about flowers.

We find people raising other things too: alligators, large ones, in little green houses; bull frogs in fish pools; newts and salamanders in terrariums; turtles, birds, rabbits, even snakes. Teresa thinks my job is great fun, especially since she is often presented with flowers and plants for her own little garden, and other things, such as a parasol, and a kitten!

She had long wanted a kitten but we had been traveling around so much that it was impossible to keep one. It is true we had two little ones in Xochimilco, Mexico. We got them when we were living in our stone house with the thatched roof, to scare away the field mice which ran across the bed at night. The kittens didn't do much good. We locked them in at night, but in the morning they used to run back to the Indian’s wattle hut next door where there was a fat pig and several turkeys, both alive and in the shape of mole plentifully spiced with peppers, to keep them company, inside and out.

But our kitten here is very much with us. He thinks his tray of sand is to play in, and he jumps in and out, scattering sand all around, hunting for an occasional pebble. When I cuffed him the other day for a misdemeanor—very cold-bloodedly, for I was in a happy humor and only meant to remind him that some things aren’t done—Teresa looked at me with astonishment.

“You made my eyes get swampy when you did that to my little cat,” she said reproachfully.

It is fun to get in the car and go jouncing along to see new places and people, and both the places and people are very nice, having to do with flowers and birds and beasts as they do. We jump and leap occasionally, “like a goat” Teresa says, but generally the car runs smoothly. Once we got stuck on the side of Grymes Hill, where Maxim Gorki and Dickens visited when they were here. (Little is known about their stay.) It is a very steep hill, and I bore down on the foot brake so hard that my sprained knee started hurting grievously.

“We just can't do anything,” Teresa said in her resigned way, “so we'll just admire the scenery.” We were concentrating on this when a truck came along and nosed us up to the top very kindly.

We never telephone people we are coming, because the nicest ones are the quiet ones who don't like to be interviewed, and we find that it serves better just to walk in on them and their plants. Mrs. Stirn, a nice old German woman, was a pleasant refuge to us after our strain and excitement of getting there, and we sat on her terrace looking out over the Narrows, and talked of Capri and Axel Munthe and many other things besides flowers, while Teresa tried to catch a little snake which had clumsily fallen down out of the rock garden into a tiny pool of water which was made there for birds and rabbits.

Our own garden is not doing so very well. The soil is full of clay which hardens like cement; the five pounds of grass seed which I sowed have been blown away or eaten by the starlings, and what is left is coming up in a most haphazard manner. But the irises which used to form a hedge around the house and are now in clumps, are bursting into flower, and the forsythia is blooming like bursts of sunshine around the house. Just beyond my little lawn and the wild cherry and apple trees, the ground dips sharply to the sands, which are as yellow and as warm as ever. The bay is a calm grey blue today, and the little waves chuckle along the beach.

Every afternoon we lie in the sun there and keep very still to hear the last of the gulls who are on their way further north for the summer and to listen to the water and the land birds. Sometimes Lefty, who has a vocation for poverty, comes out of his shack, where he lives winter and summer, and skins eels and washes clams for his· supper and keeps us company. He does not like money, nor need it, and lives by exchange, bringing a mess of fish to the barber for a haircut and digging worms for fishermen in exchange for groceries and loaning out his boat for kerosene to fill his lamp. He heats and cooks in his little shack by a driftwood fire.

Down in Mexico I had the endless lagoons of Xochimilco on every side, with the mountains rising up around them. Here are the long reaches of the bay. Down there I was surrounded by a garden full of violets, roses, cactus flowers, calla-lilies and pomegranate trees, but never a blade of grass. Here is green, lush green, everywhere.

Down there in the country I lived in a house where the doors and windows were of solid oak and had to be taken down in the morning to let light into the place. It is a land which cannot afford glass windows in the country places. But here there are six windows looking out on the meadows, the sands and the bay.

I am very glad to be home again, to be cultivating my own bit of soil, to be living in my own house and to feel, for the time at least, that I am never going to leave it again. There is beauty here too, a lovely, gentle beauty of cultivated gardens and woodlands and shore. We picked flowers the other day in the woods—dogwood, wild lily of the valley, quince blossoms, blueberry blossoms and the last of the violets. Along the road we gathered sweet clover to put in the hot attic, where its fragrance will be distilled and fill the house, and Teresa sighed happily, “Flowers and grass and things are so beautiful, they just hurt my feelings.”

Tags
Environment
From the Archives
Spirituality