By Dorothy Day
Children's Books
From the Archives 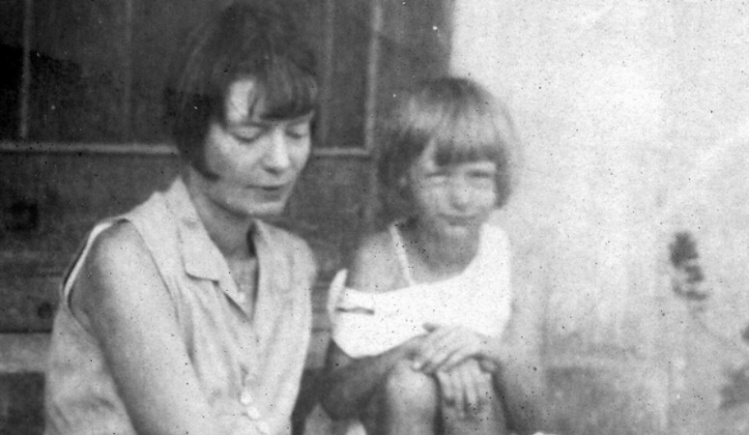 Teresa four and a handful, sat at the library table with her crayons and paper in front of her and tried to ignore the fact that it was getting dark outside and that it was time for her to go to bed.

I sat at my desk trying to write letters.

"Here is a picture of a man, a man dancing and telling a whole lot of stories. He's playing on his catarrh too, and singing songs. Are you listening?"

"And here is a little boy, and he stays out in the garden all day, not in the house anymore, because people are naughty to him. Lookit!"

"And this is just a man, muy feo, muy feo. Muy grande boca, muy grande ears, asi, and tomorrow I'll make three or four ears on him. Isn’t he a terrible man? Are you looking?"

Teresa's conversation as well as her pictures were influenced by her recent stay in Mexico.

"And this is a kitchen with all the dishes hanging on the walls, and here is the Holy Ghost and there’s fire-crackers in the kitchen and a fiesta. It's so much noise, I must go outside and play with the childuns. And the Virgin Mary is out there too with a little tiny baby, and this is a picture of me dancing, and the Virgin Mary is dancing too and there are leaves all around. Do you hear me?"

"But you have to go to bed, so come on, honey, and I'll help you unfasten."

Then one of those hectic half-hours which mothers know. The bath; the shower, insisted upon to top it off ; the spilling all over the bathroom floor; the desire, combated, to mop it up; the giving of the eight drops of concentrated cod liver oil, treated by violet ray, guaranteed to put on eight pounds a week, an elixir of life (only maybe it is the orange juice in which it is given which does the trick); the nightly battle over whether to wear "jamas" or a "nightie"; the insistence on the box of chessmen under the bed to wake up on in the morning.

Then prayers, repeated after me, begun in a kneeling posture, continued in a sitting, relapsing finally into some sort of gymnastic posture.

"What!" in pained surprise.

"Either sit down or kneel down, but for goodness’ sake keep still."

"Won't the Virgin Mary like it if I try to stand on my head?"

Unanswerable question. I'm sure she does like it, but what is one to say?

"Now come on, hurry up and finish."

"I don't want to hurry up," piously. Teresa continued with a long list of people and things to be blessed by God, and then with a virtuous sense of duty done, she hopped into bed.

"What about a kiss?" she asked coyly.

"Here is a kiss." But it was too definite a one.

"Lookit. A little moss in the glass of water." The little moth which had flown in from the garden just to complicate matters, was dumped down the wash-bowl.

"Did you throw it away?"

"Did it get drowned?"

"Probably, and now for goodness’ sake go to sleep."

I have held Milne’s poem of Mary Jane and her "rice pudding for supper again" against him, and now I was beginning to resent his famous elephant which was causing all the giggles.

The small voice rambled on. From the sitting-room I could hear it as it was intended I should.

"Doddee! Are you listening? I want to tell you a story. Once there was a little mouse and a bunny rabbit and the bunny had jamas on and a pretty little hat and he went to the mouse's house for supper and they had bumana and puddum for supper."

The story went on. The requests for attention went on.

"Are you listening to me? Why don't you answer me? I'm not going to sleep. Do you hear that I'm not going to sleep? Why didn't you tell me the story of Old Mother Cupboard who lived in a shoe and had so many childuns she didn't know what to do with them all? And what did Humpty Dumpty fall off the wall for? Was he a naughty boy and did his mama tell him not to climb up? You didn't cut out any paper dolls for me tonight. You didn't let me color the paper dolls that you didn't cut out. You didn't let me—"

There was no end to the things I had not let Teresa do that evening and which she wanted to do besides sleep.

Feeling somewhat guilty by my child's recriminations, I got up and fetched her favorite doll.

The small accusing voice continued. . . . And then—suddenly I realized that I had been reading for five or ten minutes in complete silence. Once more the nightly miracle had been accomplished. Teresa had fallen asleep.

Tags
Children's Books
From the Archives