Breastfeeding in the Bible, and in the Church
By Mollie Wilson O’Reilly
U.S. Catholicism
Pope Francis
Columnists 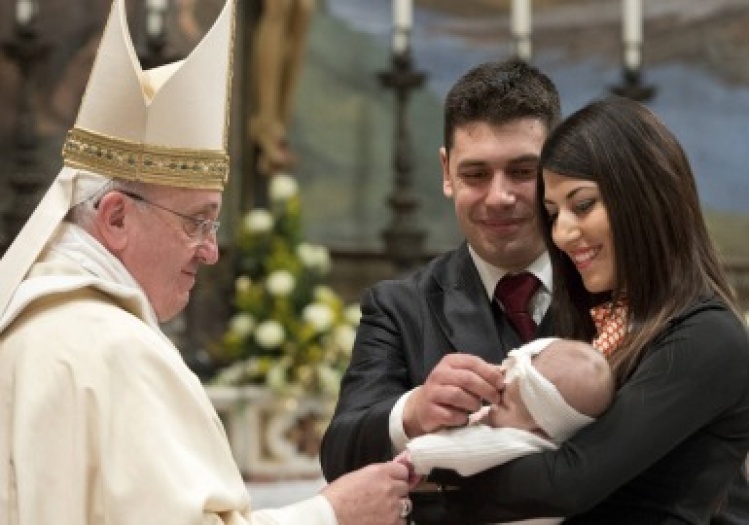 The year I got married, Ash Wednesday fell less than a month after the wedding. Too soon for fasting and repenting, I thought, but the first reading, from Joel, says otherwise: “Proclaim a fast, call an assembly.... Let the bridegroom quit his room and the bride her chamber.” No excuses, newlyweds. Now, as chaperone to two small boys, I’m on the prophet’s guest list once again: “Gather the children and the infants at the breast.” Technically, as a nursing mother, I am exempt from the obligation to fast this year (and don’t think I’m not grateful). But I’m still expected to show up. Lent is the opposite of a party, but still, everybody’s invited.

Pope Francis caused a stir—yes, again—in December with a story about an encounter with a young mother at a papal audience. “She was shy and didn’t want to breastfeed in public, while the Pope was passing,” he recalled. “I said to her, ‘Madam, I think the child’s hungry.... Please give it something to eat!’” A few weeks later, at a baptism ceremony in the Sistine Chapel, he tapped his inner La Leche League leader again: If the babies are hungry, he said, “mothers, feed them, without thinking twice. Because they are the most important people here.”

For those of us who regularly show up to church with nurslings in tow, that papal permission slip is a welcome gift. The medical establishment may be firm in its conviction that “breast is best,” but the culture that converted to formula-feeding a few generations ago has been slower to come around to the new standard. There’s a lingering sense that breastfeeding ought to be as private as any other thing involving breasts: Feed your baby that way if you must, but don’t do it where anyone else can see. Given that newborns need to eat around the clock, telling a new mother not to nurse in public is essentially telling her not to be in public. Still, nurse a baby in church and you risk dirty looks. Of course, letting a hungry infant cry is also risking disapproval. It’s enough to make a new mom want to stay home.

Yet, while breastfeeding has only recently made a comeback in Western culture, it’s a recurring theme in Scripture. Homilists rarely dwell on those passages when they come up in the readings (can you blame them?), but they are refreshingly relatable to a distracted, sleep-deprived parent. My younger son was just a month old when a reading from Isaiah caught my attention one Sunday—a vision of paradise in the New Jerusalem: “Oh, that you may suck fully of the milk of her comfort, that you may nurse with delight at her abundant breasts!... As nurslings, you shall be carried in her arms, and fondled in her lap; as a mother comforts her child, so will I comfort you.”

That’s an image of God we could stand to hear more of, “abundant breasts” and all. And hearing it at Mass made me feel less like a distraction and more like a visual aid: This is how a mother comforts her child; this is what a nursling in a mother’s lap is like. Not that my own mothering is especially heavenly—see me when the baby’s in a biting phase—but it’s a pleasure to be able to draw so deeply on my own experience in developing my understanding of God. Talk like that is enough to make a new mom want to stick around.

Likewise, what made Francis’s remarks about feeding babies so encouraging was not his attitude toward nursing per se, but his interest in young mothers and his sensitivity to their needs—his concern that they feel welcome and comfortable in places of prayer. Whatever else he may do, or not, to advance the presence of women in the church, he is at least demonstrating by example that women’s experiences are significant, and not just as metaphors.

The reading from Joel we hear every Ash Wednesday is the ultimate “inclusive” text: everybody is invited to join the assembly, no exceptions. It’s a challenge, too, to the self-absorbed among us—and who’s more self-absorbed than a new parent? Maybe newlyweds? You can add your own items to Joel’s list: Let the toddlers come with their goldfish crackers; let the teenagers quit their texting; let the grad students abandon their primary texts. Just don’t leave out the infants at the breast. And remember, when they do show up, they don’t have to fast. Pope Francis said so.