'Deceptive Practice' & 'Now You See Me'
By Richard Alleva
Movies 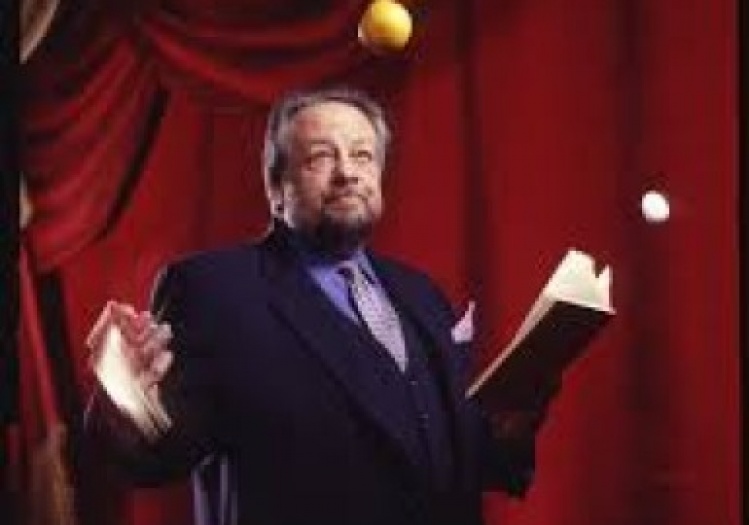 Unlike those legendary magi—Faustus, Simon Magus, etc.—who claimed contact with the spirit world, modern magicians merely prove that their hands are quicker than our eyes. Yet, as they snatch coins from thin air and produce the very cards we thought about but never named out loud, don’t they make us doubt, for a few seconds at least, the daylight solidity of the world and our ability to perceive simple physical realities?

Ricky Jay (born Richard Potash) is one of the great living magicians, specializing in but not limited to card tricks, and in the documentary Deceptive Practice: The Mysteries and Mentors of Ricky Jay, directors Molly Bernstein and Alan Edelstein keep their camera very tight on his face during the interviews, as if by registering every blink and facial tic they could establish some undeniable psychological truths, no matter how reality-disorienting his tricks are. Yet his countenance turns out to be no easier to read than the movement of his hands. Round, plump, bland, and bearded, his face could be that of, say, a streetwise New York actor of a savvy and amiably aggressive disposition—the sort of workaday thespian who might be offered roles turned down by Paul Giamatti. (In fact, Jay has acted in films, notably House of Games, directed by David Mamet, who staged some of Jay’s shows and is one of the commentators in this film). There’s certainly nothing threatening in his features, yet on stage Jay becomes glamorously dangerous in the way all great performers are. While his hands are busy confusing our eyes, his own eyes stare us down. How, they seem to ask us, can you disbelieve that you’ve seen what you’ve just seen, especially when, thanks to the camera, you’ve seen it in close up? Yet… how can you believe it?

The most astounding feats are two that aren’t on camera but are only reported. Ricky’s Akido instructor tells of bringing a couple of friends by the magician’s place just after Jay has stepped out of the shower. The instructor demands that Jay perform his trick of turning two $1 bills into one $2 bill. Instantly, the feat is achieved. We know that the $2 bill must have been on the magician’s person, but where? Presumably, Jay was wearing a bathrobe or a towel about his loins, so…in a pocket? And could he have been so prepared to perform the trick if he had just been in the shower and wasn’t expecting guests?

When British reporter Suzie Mackenzie is seated across from him in a restaurant, Ricky lowers his menu to reveal a large block of ice on the table. Possible clues: he chose the restaurant, took a long time driving there, and the block is fast melting. So obviously the restaurant’s management was in cahoots and had the ice out of the freezer (a little too early). But when Mackenzie looks under the table, she sees a dry floor. What kind of container was the ice in, and how was it conveyed to the table?

Since I’m more interested in storytelling and psychology than in prestidigitation, two themes in this documentary impressed me at least as much as any of Jay’s tricks. The “mentors” of the subtitle are, of course, senior magicians the young Ricky latched onto for instruction. Everyone has had teachers who displayed truculence even as they shared their expertise. But among magicians, this familiar situation is exacerbated, since a good magic trick is, almost by definition, something not to be explained, even to other magicians. Several of Jay’s masters taught him a great deal, but at least one took some secrets with him to the grave. Did he selfishly deprive posterity or is confounding everyone forever an inalienable instinct of the profession?

But a much more disturbing note is struck in regard to Jay’s family. Young Ricky learned magic from his grandfather, a talented amateur, but his parents also apparently indulged their child, even hiring a nationally famous performer to entertain at one of the boy’s birthday parties. Yet, at age twenty, Jay turned his back on his father and mother. He tells us only that they “didn’t get” him and had “no rapport” with him, banal phrases that could describe any teenage rebellion—except that Ricky’s familial rupture has persisted for forty-five years. It’s as if he felt his parents had insulted his spiritual core. Considering that he was occupied with magic from the age of four, was his vocation a factor in the break? Even close friends don’t know the answer and sense they must steer clear of the subject if they want to preserve their friendship. This may be a secret that Jay himself will take to the grave.

DECEPTIVE PRACTICE GOT ME FIRED UP to see another movie about magicians, Now You See Me, but this fiction wasn’t as magical as the documentary. Nothing wrong with the concept: bring together four tricksters, each with a very distinct specialty, who pool their skills to stage a big heist that will punish some piggish tycoons. Assembled are a David Copperfield–type showman with flashy props and blinding lights, a slight-of-hand artist, a female Houdini, and a mind reader. So, let the games begin! And let the contrast of methods and clash of backgrounds, techniques, and personalities ratchet up the drama.

It’s impossible to know at what stage this promising concept was ruined, since there are so many detours a big-budget production can take, but perhaps doom was inevitable when Louis Leterrier, a French manufacturer of digital noise and dazzle (Transporter 2, Clash of the Titans) was given the helm. At any rate, what’s left on screen is mostly swirling camera work and narrative confusion. A story like this is meant to be full of plot reversals that keep you guessing, and I don’t mind it if they make no sense as you think them over in the lobby on the way out. But here they don’t even seem to make sense while you’re watching them. Meanwhile the idea of different kinds of illusionists working together gets lost. The escape artist doesn’t do any more escaping than her confreres, and their getaways are banal—crashing through windows or plunging down garbage chutes. The sleight-of-hand artist’s big scene is a martial-arts combat so stupidly edited that we can’t really see the fight; and the mentalist—though Woody Harrelson brings some charm to the role—turns out to be completely unnecessary since one of the big revelations at the end of the film would have been spoiled by mind-reading. (Did Harrelson ever wonder why he’d been hired?)

Just before the climactic heist, we see the four robbers squabbling nervously among themselves because they don’t really know the identity of the mastermind giving them orders from behind the scenes. This moment briefly injects real drama into the movie: the four smugly invincible magicians become vulnerable enough for us to feel doubt about their ultimate success. Result: suspense. But soon we’re stuck once more within the point-of-view of bumbling detective Mark Ruffalo (a fine actor wasted yet again) falling into one trap after another while grunting, sweating, cursing, and screaming stuff like “Oh no! Now they’ve got my cell phone!” Meanwhile, a cool French lovely (Melanie Laurent) from Interpol stands to one side pursing her lips or rolling her eyes at the American clod.

Even if the execution had been a thousand times better, Now You See Me would still suffer from an insuperable problem. In a real magic act performed in a documentary like Deceptive Practice, the skill is right there before your eyes, baffling and delighting you. In any fiction like Now You See Me all the dazzlement is the work of post-production digitalization. Where’s the magic in that?