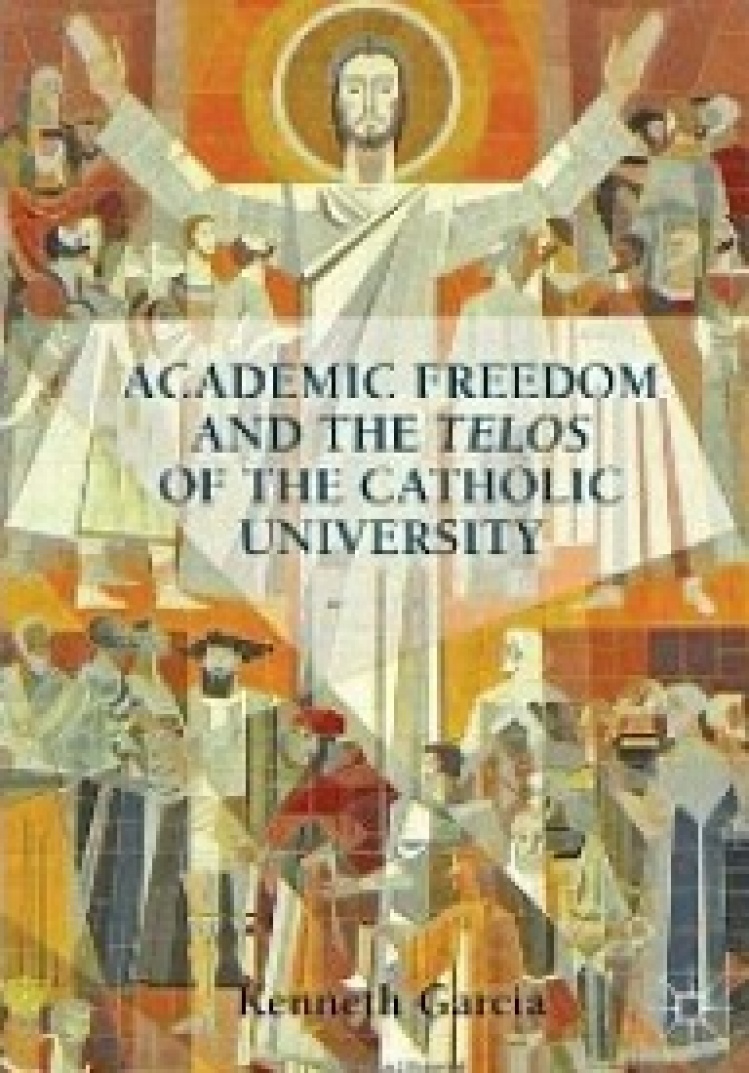 “A crisis is looming within American Catholic higher education,” read the diagnosis, issued in 2006. “As Catholic colleges and universities analyze their position and set a course for the future, they are faced with a structural reality that threatens their ability to continue as institutions with vibrant religious cultures.”  With these sobering lines Melanie M. Morey and John J. Piderit, SJ, opened their account of the challenges facing Catholic higher education (Catholic Higher Education: A Culture in Crisis, Oxford). Their interviews of senior administrators at thirty-three Catholic institutions revealed a widespread inability to articulate the relationship between the Catholic intellectual tradition and the academic disciplines of the modern university. The presidents and provosts were positively eloquent, on the other hand, in expressing their commitment to building a faculty that could compete with leading secular institutions for students, prestige, federal grants, and other sources of public funding. This quest for high-yield faculty, Morey and Piderit warned, could come at the cost of the Catholic identity of institutions already displaying “a rather weak Catholic culture.”

Kenneth Garcia’s Academic Freedom and the Telos of the Catholic University provides a thoughtful if ultimately unsatisfying program of action in response to this warning. Briskly reviewing and analyzing the nexus of Christian epistemology, inquiry, and education, Garcia proposes an understanding of academic freedom more constructive and capacious than the definition imported wholesale from secular institutions. That definition, formulated initially by the American Association of University Professors in 1915 as the right of scholars to publish “without fear or favor,” was developed—or narrowed, as Garcia would have it—in Arthur O. Lovejoy’s decisive statement of 1930, as the freedom from meddling by “political or ecclesiastical authority” in the conduct or findings of research and teaching. For any scholar working in the American university system, the only legitimate arbiters of academic freedom, Lovejoy declared, are “qualified bodies of his own profession.”

Garcia objects to this formula on two grounds: first, because it frames academic freedom as a negative (freedom from, not freedom to), and second because it reinforces the secularizing trend whereby academic disciplines are treated as sovereign fiefdoms controlling fragments of knowledge but unable or unwilling to help integrate them into a unified whole. In its place he proposes a “theonomous” understanding of academic freedom as “the freedom to follow the mind’s telos toward an ultimate horizon and the freedom to prescind from going there.” Tracing this epistemological claim in the writings of Augustine, Bonaventure, and Aquinas and their modern interpreters Henri de Lubac, Karl Rahner, and Michael Buckley, Garcia summarizes it as follows: “There is at the heart of all inquiry, whether the inquirer is explicitly aware of it or not, a dynamism (a spiritual and intellectual eros, in the words of many church fathers) whose source and goal is the divine.” To allow and even encourage scholars to dwell solely within specialized domains, in the realm of the finite, without venturing out beyond their “Kantian islands” of bounded empirical investigation to explore the transcendent, Garcia complains, ignores “an inner teleology driving us toward ever greater understanding, toward completeness of understanding within an ultimate horizon.”

It’s a resounding formulation. Yet questions abound. If a vibrant Catholic university must have a sufficient number of faculty in every discipline who are willing to pursue this “ultimate horizon,” how are university leaders to achieve this goal? How, exactly, might Catholic educators restore the drive toward the integration of all knowledge that characterized the first modern university—the University of Berlin—and its distinguished faculty of German idealists such as Fichte, Schelling, and Schleiermacher? How might they aspire to the ideal of “permeation” of the disciplines with Christian wisdom, while avoiding a “heteronomous” imposition of ecclesiastical prerogatives and the resulting insularity of Catholic intellectual life?

Garcia’s proposed solution is to integrate Catholic theological and philosophical principles into the curriculum of each academic discipline “so that the potential for [human-divine] union is available to every student” (italics in the original). But promoting the transformation of academic culture through a game-changing interpenetration of Catholic principles and, say, neoclassical economics (or developmental psychology or molecular biochemistry) entails hurdling formidable barriers—and doing so, by Garcia’s own reckoning, without a sufficient number of Catholic thoroughbreds in most faculty stables. As a result, Garcia acknowledges, “fostering the movement beyond finite disciplines to theology will require hiring faculty with expertise in Catholic philosophy or theology as well as their own discipline” (italics added).

Good luck with that!

Herein lies the dilemma facing Catholic educators in the current climate: Do you take the money, or run? Do you accept the federal and state funding necessary to keep the doors open—and with that funding, the metrics of legitimation set by largely secular standard-bearers—or run instead into the arms of a few private mega-donors, if you can find them and live with their standards? It’s not exactly a win-win outlook, since one path leads to tigers (the gradual erosion of religious identity) and the other to dragons (the paradox of sectarian, world-renouncing Catholicism).

The turning point in Garcia’s history comes, as in so many narratives of Catholic institutional decline and rebirth, during the 1960s, when the church endured simultaneous endogenous and exogenous shocks. The internal tumult was triggered by the decision of reformers, following Vatican II, to reject the self-inflicted isolation of a neoscholastic subculture that Garcia rightly describes as a dead end. The external shock came via a series of legal cases that challenged the eligibility of explicitly religious colleges and universities to receive direct government assistance. Two of these cases were ultimately decided by the U.S. Supreme Court: Tilton v. Richardson (1972) and Roemer v. Board of Public Works of Maryland (1976). In a pivotal chapter titled “The Consequences of Caesar’s Gold,” Garcia shows how the precedents set by these rulings “led Catholic college leaders to downplay the spiritual dimension of academic life, to sever their colleges’ ties with their founding religious orders, and to keep theology as a separate, autonomous discipline rather than incorporate it into the cross-disciplinary dialogues of all disciplines.”

From that moment on, the paths to Catholic educational excellence diverged. The Catholic institutions following the “take the money” path include such major universities as Georgetown, Boston College, and Garcia’s (and my) own Notre Dame, all of which strive to compete with secular universities while influencing the national conversation from a recognizably Catholic perspective. In this milieu the cost of staying in business is so staggering, the culture of disciplinary specialization so pervasive, and the ever-expanding requirements of knowledge in any one (sub)discipline so demanding, that it is virtually impossible to hire faculty with the requisite expertise in theology or philosophy and in a different discipline, or to bring willing faculty up to speed in a second discipline. Generalists have a better chance of thriving, perhaps, in the new “run for cover” colleges such as Christendom or Thomas Aquinas. But those institutions face nagging questions of financial viability, the competitiveness of their graduates on the job market, and their relevance to the secular world—presumably a desideratum of Catholic higher education.

To address this dilemma, Garcia provides a list of coping measures (e.g., sabbaticals or summer seminars for faculty in the Catholic intellectual tradition) that will be familiar to those professors and administrators already fighting the good fight to retain a vital Catholic presence on campus and in the classroom. If they are not winning, exactly, these stalwarts of faith and reason are nonetheless enabling their still-thriving Catholic institutions to demonstrate that George Bernard Shaw was wrong to call a Catholic university an oxymoron. Fighting this battle is a noble vocation and by no means quixotic. Maintaining the balance between disciplinary specialization, professional credibility, and “integration toward truth” is a formidable task, and American Catholic educators cannot afford to relax. Church officials do not make it any easier when they fail to appreciate the subtlety and precision required to pull it off.

Garcia generally underplays the withering impact of intra-ecclesial power dynamics and the stifling of internal Catholic diversity. He does call attention, however, to the lingering effects of the misreading of Aquinas, and of the Catholic intellectual tradition more broadly, by the church bureaucrats and theologians who battled liberalism and modernism around the turn of the twentieth century. In their campaign to defend the authority of the magisterium against the encroachments of Catholic thinkers promoting more bottom-up processes of doctrinal development, neoscholastic philosophers posited the existence of a state of “pure nature” abstracted from its divine milieu, and advanced a concept of grace as “extrinsic” to human nature and ordinary experience. In so doing, these antimodernists detached philosophy and theology from the social sciences and the natural sciences, a move that gave an unintended boost to the ascendancy of “mere empiricism” within the academy. Thus did hegemons of the church conspire unwittingly with hegemons of the academy.

The legacy of this antimodernist campaign subtly affects the church’s self-understanding—and thus Catholic higher education—to this day. To study “the world” as an island set adrift from the Love which permeates, sustains, and redeems it is to commit the most fundamental category error. Nature and society are more than the sum of their parts, reality more than “the world.”

Though he may not know exactly how to accomplish it, Kenneth Garcia certainly comprehends that what the church and the academy have set asunder, Catholic scholars, teachers, and provosts are called to reunite. Doing so in a historical context that does not produce Catholic intellectuals with ease or regularity is both exceedingly difficult and vitally urgent. Summer seminars and sabbaticals will not suffice. Only a whole-of-church effort has a reasonable chance of success.

R. Scott Appleby is the Marilyn Keough Dean of the Keough School of Global Affairs and professor of history at the University of Notre Dame.