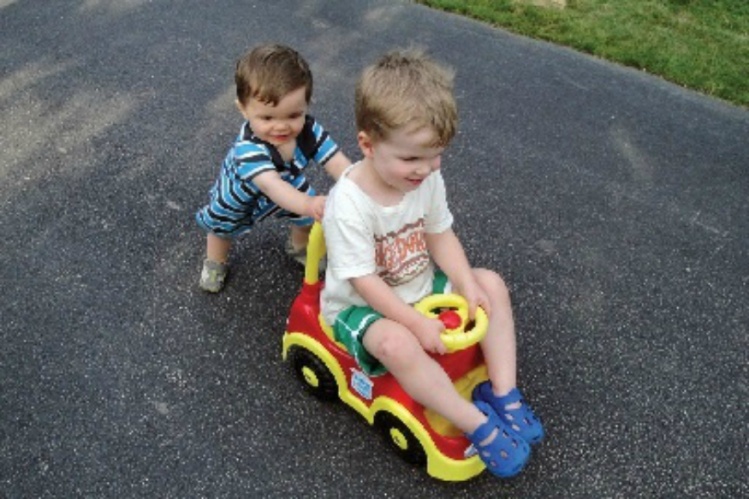 My big mistake was not looking closely enough at the storybook zoos. I thought I was raising a liberated preschooler, unburdened with hoary notions of gender roles that might thwart his ability to form healthy relationships. His favorite toy is his play kitchen, where he cooks like Daddy does. When he plays “going to work,” it’s me he imitates, hoisting the bag that holds the breast pump for the baby onto his three-year-old shoulders and heading for the door with a cheerful goodbye. Once we showed him a video of a men’s swimming relay, because he wanted to know what swimming looks like. He watched till the end and then said, “Now it’s the ladies’ turn.” I was proud: he’d noticed the imbalance and sought to correct it all on his own.

So, I was taken by surprise when he told me confidently, “Only boys can be zookeepers.” We had once again turned to YouTube as an educational tool, this time to prepare him for a trip to the Bronx Zoo. Knowing his idea of a zoo was shaped by what he’d seen in books, with animals housed in narrow concrete cages rather than roaming their spacious habitats, I wanted him to have a more accurate picture of what the visit was going to be like. So I called up a video that began with a woman in a Wildlife Conservation Society uniform introducing herself: “I’m a wild-animal keeper, and I take care of the aardvarks here at the Bronx Zoo.” My son shook his head: not possible. He wasn’t disdainful, but matter-of-fact. He knew better.

Books are where my boys get a lot of their impressions of the wider world, and so I try to be mindful as we read of what sort of messages they might be getting. Sometimes I will make an on-the-fly edit, such as skipping the line in Fred Rogers’s Going to the Dentist about how dental hygienists are usually women (true, I suppose, but why point it out?). For the most part, the books cooperate with my feminist intentions: there are, to be honest, far more women driving buses and working at construction sites in contemporary picture books than we’re likely to see in real life. But storybook zoos are resolutely old-fashioned, even in recent books, and they have the personnel to match. I made a mental inventory of our bookshelves: Sammy the Seal; Good Night, Gorilla; Animal Strike at the Zoo. It’s True!; A Sick Day for Amos McGee…not a female zookeeper in the bunch. It had never occurred to me to look for one. But Marty had noticed. And, just as I feared, he had drawn his conclusions without even questioning their logic.

That particular error was easy enough to correct—we saw lots of women on the job at the real-life zoo. But what else has he inferred about what girls or boys can or can’t do? I’ve been wondering when my sons would take note of the one vocation they encounter on a regular basis that is, in fact, limited to men, and what I would say when they finally asked, “Mommy, why can’t a woman be a priest?” But now I’m more concerned that they won’t bother to ask at all.

People sometimes defend the practice of excluding girls from being altar servers—even though the Vatican has clarified that both sexes are eligible for that ministry—because, they say, boys will be more attracted to the role, and thus potentially to the priesthood, if it’s something only boys can do. That may well be true, but is that really the motivation we want our future priests to have? I hope finding out that women can be zookeepers hasn’t made that job less attractive to my son.

I would love to see my boys as altar servers, and I would love for them to grow into adults who would at least consider dedicating their lives to the service of the church—even if that service is not reserved for men only. But if I should have a daughter—who surely will ask about the sex-based limitations she encounters at church and nowhere else—I will want the same for her.

Who knows: maybe my kids will grow up to be the ones who can explain the all-male priesthood to me in a way that makes sense—who can offer a theological justification that doesn’t sound like begging the question. It hasn’t happened yet, but like any parent, I think my children are exceptional. For now, I just want them to keep believing there’s nothing they can’t do—and not only because they happen to be boys.

Published in the October 24, 2014 issue:
View Contents
Tags
Columnists
Women in the Church