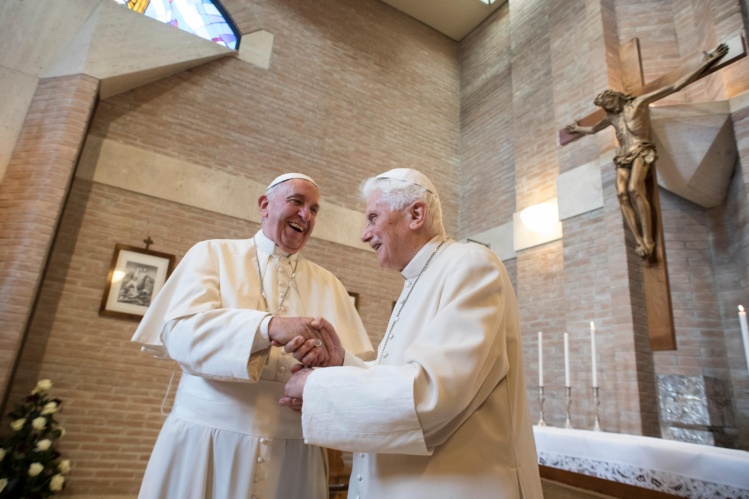 Communication problems are usually not just communication problems: this is as true at the Vatican as it is anywhere else. The fiasco surrounding Benedict XVI’s letter declining an invitation to write the introduction for a series of volumes on Pope Francis’s theology was more than a PR snafu. It reveals deeper issues in the ongoing transition from the pontificate of Benedict XVI to the pontificate of Francis.

In his now-famous letter about Francis’s theology, Benedict XVI rejected the “foolish prejudice of those who see Pope Francis as someone who lacks a particular theological and philosophical formation.” Benedict also insisted on an “interior unity” between his papacy and that of his successor. Nevertheless, it is clear, five years into Francis’s pontificate, that Catholic theology—at least in Europe and North America—has yet to receive and fully explore the theology of Jorge Mario Bergoglio. There have been notable exceptions and new efforts are underway. But the fact that we had to wait until the fifth year of this pontificate for an Italian philosopher, Massimo Borghesi, to write the first intellectual biography of Jorge Mario Bergoglio is significant. It underscores the difference between the way this pope has been understood and the way the two previous popes were. From the beginning of their pontificates, John Paul II and Benedict XVI were treated as serious theologians. Francis, by contrast, has been treated—even by some of his admirers—as if he were less interested in theology, and less intellectual in general. This is partly a reflection of the fact that European and North American Catholic theology still does not take Latin American theology as seriously as it should. It is also partly attributable to Francis’s inability to forge productive relationships with academic theologians.

This is not just about Francis himself; it will also be an issue for the conclave that chooses his successor. In the decades before Francis, Catholicism addressed itself to the secular world in intellectual terms in order to combat what Rome regarded as a cultural crisis. The papacy has been a powerful shaper of this intellectualization of Catholicism because of the election of popes whose message was more theological-intellectual than pastoral. In the past, popes tended to entrust the intellectual part of the church’s mission to others—the Holy Office, religious orders, universities and academies, etc. The evolution of the papacy toward a more intellectual focus is part of a larger process: the weakening of the role of cultural gatekeepers in the relationship between the church at large and the pope. The commercial success of books written by the past three popes is one sign of this change; Catholics want to hear directly from the man at the top, and not only in his official utterances. One function of theologians was to mediate between the Vatican and the laity, but in the era of pope-as-a-theologian-in-chief that function has been rendered mostly redundant.

Now the understanding of the pope’s role with respect to Catholic theology is shifting again under Francis, and this has left many feeling unsettled. The transition from the last pontificate to this one has been complicated less by the personal relationship between Benedict and Francis than by disagreements about the proper job description of the modern papacy.

That brings us to a second problem highlighted by the crisis in the Vatican communications office: the conflict between the expectation that the pope should manage and reform the Curia—a demanding task unto itself—and the expectation that the pope should continue to play a more charismatic role, a role that began to take shape with the First Vatican Council’s declarations of papal primacy and papal infallibility. In recent decades the mass media have amplified this aspect of the papacy, and it is precisely this that has made it so difficult for one pope to step aside and make way for another. The close association of the papal office with the personality of whoever happens to be pope makes it harder for many people to accept, or even conceive of, a resignation. So far at least, there has been a failure to understand the ecclesiological implications of the modern papacy’s charismatic character—and in particular the way mass media and social media have reshaped the papacy in recent decades.

The fact that Francis and Benedict get along very well personally is finally less important than the fact that, for many Catholics, Benedict, not Francis, remains the real guarantor of orthodoxy.
sharetweet

The third and most delicate problem concerns the institution of the “pope emeritus” created by Benedict XVI’s decision to resign in February 2013. Five years later, the transition from Benedict to Francis is still incomplete. When a pope dies, the transition is quick and simple: the next pope assumes his new institutional power and his new charismatic role at the same time. But when a pope retires and remains at the Vatican, as Benedict has done, he transfers his institutional powers immediately but his charismatic role only gradually. So long as he remains alive, he will seem to enjoy an unofficial seniority. Then too, Benedict’s years as prefect of the former Holy Office continue to cast a long shadow. The penalties he and the CDF under him imposed on certain theologians over the course of almost a quarter of a century have not been lifted. Investigations from that period have been suspended but not closed. And this is not a problem just for the theologians in question. Benedict’s continuing presence as pope emeritus has left the church with outstanding bills that a normal transition between pontificates tends to settle. Thus, in his recent letter about Francis, Benedict XVI expressed surprise that one of the theologians invited to write a volume on Francis’s theology was Peter Huenermann (interviewed in Commonweal in September 2016) professor emeritus of systematic theology at the University of Tuebingen, whom Benedict XVI characterized in a rather personal way as someone “who during my pontificate had distinguished himself by leading anti-papal initiatives” (full disclosure: Huenermann is one of my mentors).

In the whole kerfuffle over Benedict’s letter, it is still not clear what role his own entourage played. But the attempt by Dario Viganò, the now-former prefect of the Vatican Secretariat for Communication, to obtain Benedict’s endorsement for this project revealed a failure to appreciate the dynamic in play between the pope emeritus and the pope. The fact that Francis and Benedict get along very well personally is finally less important than the fact that, for many Catholics, Benedict, not Francis, remains the real guarantor of orthodoxy. They cannot quite accept that Benedict XVI’s office and ministry as bishop of Rome ceased completely on February 28, 2013, at 8 o’clock pm Rome time. If everyone fully accepted this fact, no one would feel the need to extract from the last pope a public statement confirming the theological legitimacy of his successor. The attempt to defend Pope Francis by means of endorsements from Benedict XVI creates a dangerous and unnecessary precedent, even if does not immediately backfire, as it did in this case.

The relationship between one pontificate and the next fascinates scholars of Catholicism because it is always complicated, even when there is no question of when one ended and the other started. But if popes are going to start retiring, the church needs to define clearly what their retirement means and how it bears on the ministry of their successors. Until there was a “pope emeritus” it was impossible to know what a pope emeritus would mean for the actual pope. Now we’re finding out. It turns out that a pope emeritus’s entourage, residence, and relations with the media are too important to be left to chance or improvisation. There should not be room for the slightest doubt about who is really in charge.