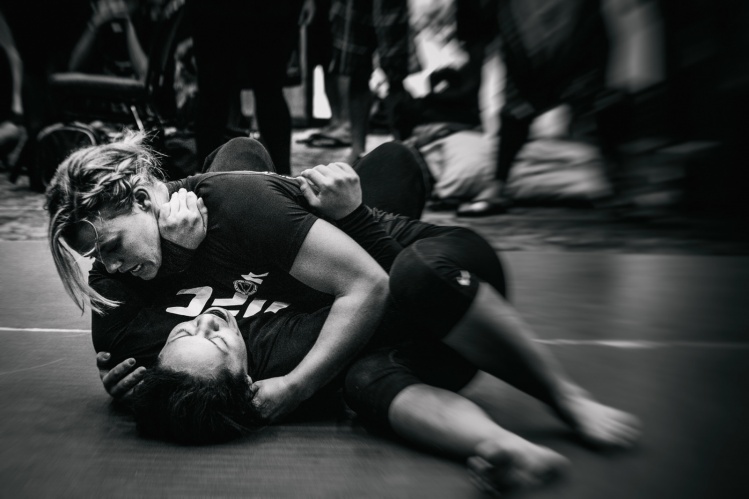 I recently listened to a male friend react to testimonies from the “Me Too” movement with shock, horror, and anger. He reached the noble conclusion that since so many women are “probably traumatized, you must feel so vulnerable.”

As I listened to his well-intentioned speech, all I could visualize was the time I choked a 225-pound man with my thighs using a move called “the triangle.”

I learned the triangle, along with many other moves, holds, and takedowns, while training in mixed martial arts (MMA). I took up MMA when I was nineteen to counter the physical inadequacy I felt. Like many young women, I’d grown up having internalized the narrative that boys are just stronger than girls, run faster than girls, throw farther than girls, lift more than girls. Boys rape girls, boys murder girls. Rhetoric and representations of the physical and symbolic power of men made me feel condemned to frailty. But as Leslie Jamison points out in her “Grand Unified Theory of Female Pain,” that’s a dangerous way of thinking. “The moment we start talking about wounded women,” she writes, “we risk transforming their suffering from an aspect of the female experience into an element of the female constitution.” So I started fighting. But even as I felt the surge of physical accomplishment, something else became clear: MMA fighting was also a spiritual experience.

Each time I landed a punch or kick or succeeded in a takedown, I felt a surge of courage and purpose. As Timothy reminds us, “God did not give us a spirit of timidity but a spirit of power and love and self-control.” God doesn’t want me to live in a state of fear. He wants all of us to recognize the strength that is possible through him. Practicing MMA has helped me to cast aside timidity, embrace strict self-discipline, and love my body the way God has always loved it.

This has baffled many people I know. I once proudly described to my roommate a Jiu-Jitsu move I’d mastered while she dabbed blood from my split lip. She interrupted—“How can you enjoy something so violent?” I remember my father cringing when I described a basic escape technique called the “mount, buck, and roll,” in which you use your hips to thrust an attacker off your stomach, roll on top of them and secure the dominant “mount.”

When we only hear about female bodies being hurt or abused, it is difficult to imagine how that body can have any agency.
sharetweet

I explained to my perplexed friends and family that I am drawn to mixed martial arts in part because, unlike my past athletic pursuits like swimming and track, there is no modified training for women. In every form of MMA I’ve tried, boys and girls work out side by side. When I trained with the Oxford Boxing team, we sprinted the same number of laps around the track, hit the same number of reps on the bag; we even practiced sparring techniques together. Being smaller than most of the boys on my Jiu-Jitsu team in college was irrelevant as long as I honed my technique. Krav Maga, a fighting style focused on defensive techniques for realistic attack scenarios, taught me to pinpoint the weak areas in male and female bodies alike.

This is why it seemed strange when my friend called women “vulnerable,” as though he meant “powerless.” Training reminds me the female body is divinely capable. When we only hear about female bodies being hurt or abused, it is difficult to imagine how that body can have any agency. But not only can our bodies create life, they also nurture, provide, protect in all the ways a male body can. We see this in the women of the Bible.

There is Judith, who famously beheaded Holofernes, the ruthless Assyrian general. She allowed herself to be captured by Holofernes’s army and charmed him. According to the Apocrypha, when he fell asleep in a drunken stupor, “she went up to the post at the end of the bed, above Holofernes' head, and took down his sword that hung there.” She prayed for strength, “and she struck his neck twice with all her might, and severed it from his body.” For Judith it only took two strokes from the tyrant’s own sword, after which she calmly took the severed head, gave it to her handmaid to be placed in a “food bag,” and walked out of the camp.

There is Deborah, the renown prophetess and judge, who ruled over courts and commanded armies. And Ruth, who “gleaned in the field,” “beat out” the barley she had gathered, then carried it all the way back to the city. Even the overseer is impressed with her stamina: “She has continued from early morning until now, without resting even for a moment.” And we mustn’t forget Mary’s exhausting journey to Bethlehem is rewarded by the excruciating experience of childbirth on the dirt floor of a manger. The godly woman is fearless, capable, rugged, and resolute.

Sometimes, before a fight, Proverbs’ wife of noble character comes to mind. “She works with willing hands,” I think, as I wrap my wrists in tape. “She makes her arms strong,” I hear, as I flex my muscles and roll my shoulders back. “Strength and dignity are her clothing, and she laughs at the time to come,” I say, as I drive a closed fist at my opponent. God is in the midst of me. I shall not be moved.