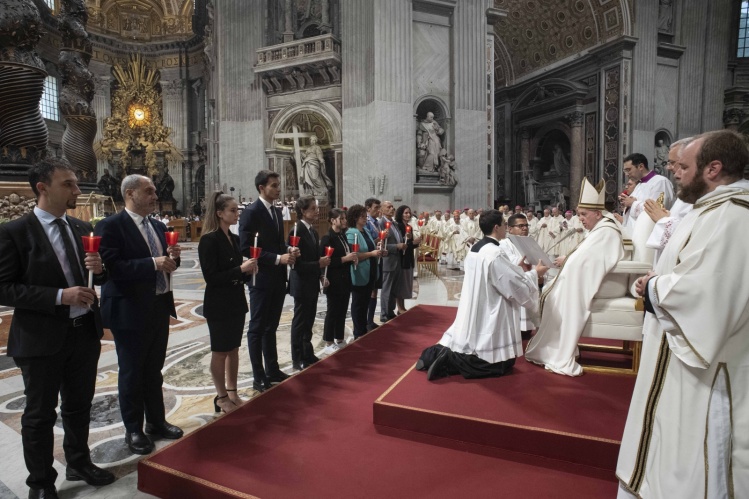 Speaking at Santa Clara University in 2015, historian John W. O’Malley, SJ, author of the book What Happened at Vatican II, made the following observation:

In 2008 I published a book on the Second Vatican Council, and I received a lot of invitations to lecture on it and was very happy to do that, but when I finished the lectures I would think to myself, “I’m really talking about something dead in the water. It’s an interesting thing that happened, but it’s gone.” And then beginning in 2012, with the anniversaries of the council, more invitations came and I felt the same way. However, I don’t feel that way today. I don’t feel that way at all. I think the council, with Pope Francis, is almost as alive as it was in 1965.

On the sixtieth anniversary of Vatican II, we stand at an inflection point in the history of the council’s reception. Francis, the first pope since the council who was not himself a participant in it, has shown us what it means to treasure Vatican II not as lived history but as a living legacy, and this has become our challenge. Can we do this too?

What O’Malley observed—the role of Pope Francis in changing the narrative about Vatican II—comes at a moment in history when the last of the fathers of Vatican II are passing away. To put it bluntly, the gifts of the council will either flourish in new hands or pass away along with them. The Church is living in a time that Canadian theologian Gilles Routhier identifies as “the era of the heirs.” The Second Vatican Council is not something we ourselves created. It’s something we’ve inherited. What we do with that inheritance now is the challenge. At the sixtieth anniversary, this truth is even more evident. It’s not enough to run the highlight reel of what happened in 1962. We are called on here and now to be canny managers of the riches the council left us in order to make that legacy flourish.

Routhier points out that while there are some advantages to being an heir, there are also pitfalls. One might turn one’s back on an inheritance, refusing it as too burdensome, or try to keep it intact by taking no chances with it, by preserving it under glass. Siblings may fight over an inheritance, cutting it into pieces so that only shreds remain, or they may place so little value on it that it simply gets frittered away. But just as the good servant in Matthew’s parable of the talents takes what he has been entrusted with and invests it wisely, returning ever greater profit to his master, there is another, better way.

All of these actions find their warrant in Vatican II. But they do not merely repeat what was said in the council documents.
sharetweet

Francis has been giving us examples of this kind of stewardship. I see it especially in his initiatives concerning the liturgy. He has returned oversight of liturgical translations to bishops’ conferences, established the Sunday of the Word of God, expanded the instituted ministries to include women, created a new instituted ministry of catechist, and encouraged the crafting of an Amazonian rite. All of these actions find their warrant in Vatican II. But they do not merely repeat what was said in the council documents. The opening of instituted ministries to women is brand new. So is the Sunday of the Word of God. The willingness to sponsor a deeply inculturated liturgy—as foreseen by Vatican II—was last permitted in 1988, in Congo. To encourage this development in the Amazon now, after such a long hiatus, is a stunning development. Admittedly, the policy change regarding oversight of liturgical translations was, in the main, a restoration of a specific conciliar directive. But even there, Francis took prophetic insights from the post-conciliar guiding document on translation Comme le prévoit—such as the claim that vernacular languages are in the process of becoming liturgical languages—and raised them to new awareness, changing the landscape of our imagination concerning the dignity of vernacular languages in the liturgy. Suddenly, we are seeing expanding horizons again.

Perhaps most significant is the pope’s two-pronged liturgical and ecclesial initiative in, first, restricting the use of the older rites (Traditionis custodes) and, second, promoting liturgical formation rooted in the reformed liturgy (Desiderio desideravi). As the Italian liturgical theologian Andrea Grillo has pointed out, Francis has brought the Church full circle, returning us to the fundamental thrust of the liturgical movement of the nineteenth and early twentieth centuries: formation. Reform of the liturgy was the necessary condition of making progress on “the liturgical question.” But it is not—and never was—sufficient for the achievement of that movement’s noble goal: renewal of the Church in faith through full, conscious, and active celebration of her liturgical rites.

The liturgical reform is critical to the council’s legacy. But it is not the only aspect of Vatican II that has shown signs of new life under Pope Francis’s leadership. Synodal processes that prize dialogue and discernment also continue the trajectory of the council. To stand in solidarity with all humanity as a beacon of hope is likewise to deliver on the council’s promise. Who could deny that Laudato si’ and Fratelli tutti are precisely oriented toward realizing the hopes of the council voiced in the Constitution on the Church in the Modern World? There are more examples, but these suffice to make the point. As in the arena of liturgy, to treat the council as a living legacy does not mean stepping back into the past or simply parroting the council documents. It means being deeply informed by the council’s way of thinking as a key to both creative and faithful responses in new situations. It means carrying the council within ourselves as we walk into the future together.