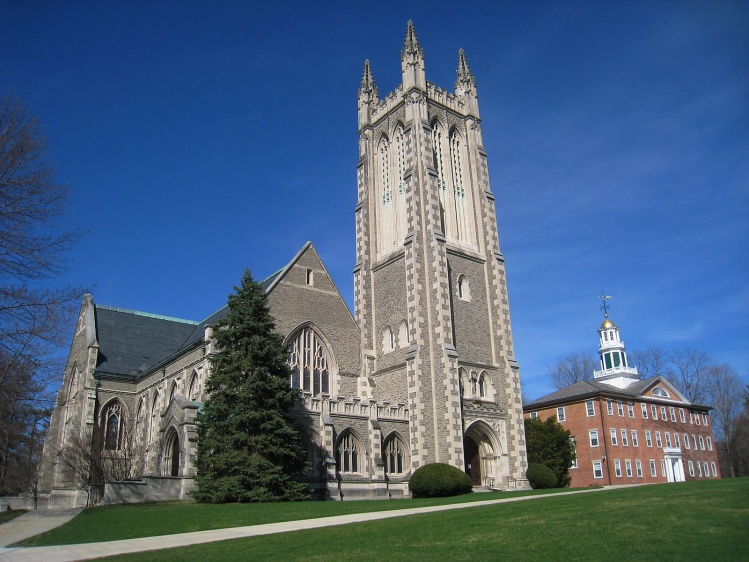 I’ve met Francis Oakley only a few times, and only at meetings of academic administrators. The first, in 1982 I think, was on a rainy fall afternoon at a gathering of ACNE (The Associated Colleges of New England), when the president of the host institution interrupted the proceedings with a diatribe against lazy, overpaid, and underperforming professors. At one point Oakley leaned over to me and whispered, “I wish I could cycle our faculty through this once a year so they’d see what they’re missing!” He was then dean of the faculty at Williams College, and I’d recently become provost at another institution to the north where I’d been teaching since the mid-1960s.

So not surprisingly I found much familiar in Oakley’s new memoir, particularly the parts about the drastic changes that have shaken up higher education in the past five decades: changes in students, in curricula, in public attitudes toward our colleges, and so forth. But though Oakley rose to become president of Williams (1985–1993), this is less a book about higher education and its ways than about “the lifelong pursuit of liberal learning”—learning not just from teaching and scholarship, but also from patient listening to those who disagree with you, whether irate students with their “non-negotiable demands,” skeptical trustees, or faculty who find some curricular suggestions to be “just not the Williams way.”

Oakley was born into an immigrant Irish Catholic family in Liverpool in 1931, but in less that a decade, he found himself dodging Nazi bombs, and then living in the world of deprivation that remained even after Britain’s victory in 1945. Homeschooled by his mother by necessity, he made it to an excellent Jesuit school, and then to Oxford (Corpus Christi College). Graduate study in Toronto was followed by his National Service in the Army, and then a return to North America (not least because of his Connecticut fiancée, whom he’d met in Canada) and a doctorate from Yale in 1959. Thence he went to Williams despite the worries of those who, like so many in the American intellectual establishment back then, assumed that a Roman Catholic could only be happy at an institution controlled by pope and church.

The real question for Oakley at Williams, however, came from his disappointment after the enormous hopes raised by the Second Vatican Council. A historian whose chief interests lay in late-medieval political thought, Oakley turned his attention to the study of conciliarism, increasingly convinced by historical evidence showing that the later rise of papal absolutism had scant historical basis, and was little more than a fearful reaction to the valid claims of conciliar authority that had been made at Constance in 1415. “No ecclesiastical exigency can alter a fact,” Lord Acton had said, and Oakley agreed. That question still hovered nervously around some of the doings of Vatican II, only to be quashed by Paul VI and the “tide of reaction” that came during

...the distinguished but in many ways destructive pontificate of John Paul II. So far as Catholicism goes, I was then and have since remained no more than one of the vast gray horde of spiritual walking wounded, shuffling forward, more in hope than expectation, in the presumed direction of the Heavenly Jerusalem.

Commonweal’s readers may remember an exchange on this subject. (See Oakley’s “Authoritative & Ignored: The Overlooked Council of Constance,” October 11, 2014, and Robert Fastiggi’s response in the letters section of the January 5, 2015, issue.) Was Oakley correct? Not my field, as we historians are wont to say, and I moved from European to Chinese history many decades ago. I’d add only that it has always struck me that among all the problems the Western church faced in the nineteenth and twentieth centuries—the French Revolution, Marxism, Darwinism, Dreyfus, the Kulturkampf, Italian unification, and the self-imposed papal “imprisonment in the Vatican”—the most serious obstacle to the growth of Catholicism was the kind of papal absolutism imposed by Gregory XVI, Pius IX, and their ilk, whose legacy lives on for many today.

Oakley went to Williams despite the worries of those who, like so many in the American intellectual establishment back then, assumed that a Roman Catholic could only be happy at an institution controlled by pope and church
sharetweet

Williams was something new to Oakley. First, the small private liberal-arts college devoted to undergraduate instruction is primarily an American phenomenon. And second, few foresaw back in 1961 the great changes that were about to sweep over American higher education. Small colleges such as Williams were about to begin their own aggiornamenti, and Oakley watched the “old Williams” (as he calls it), with its WASPy ways and fraternity traditions, giving way to new concerns brought on by the civil-rights movement, the Vietnam war, and the rise of student protests. Many of us elsewhere envied the way in which Williams’s leaders in the early ’60s had seized the moment to get rid of the college’s fraternities relatively rapidly, as we were often imposing on our own fraternities the slow and painful death of a thousand slices. Williams, like many others in those years, also brought in women students. (My own institution had done so almost a century earlier, but less, alas, because of its progressive ideas than its need for the tuition revenues.)

Oakley became dean of the faculty in 1977 and president in 1985. These positions gave him a kind of bully pulpit to forward his own ideas for changes. He was sometimes successful and sometimes not—as with his efforts to get his colleagues to think beyond departmental boundaries. A prodigious scholar himself, he was also a passionate believer that research was essential to the quality of teaching. He convinced his trustees that Williams should give its backing to the formation of the new MASS MoCA (Massachusetts Museum of Contemporary Art) in nearby North Adams, and he helped steer the college through a continuing series of crises major and minor, such as student demands for the college to divest itself from any holdings related to South African apartheid. Somewhat earlier Oakley had been acting president for one semester; I’d done the same thing, but my term in that position coincided with the high tide of the divestment movement, and it’s burned into my memory.

He finished his presidency in a burst of success, guiding the college through the celebrations attendant on Williams’s two-hundredth anniversary in 1993, finishing a highly successful fundraising drive, and then returning to his teaching and prodigious research. In 2016 his three-volume work The Emergence of Western Political Thought in the Latin Middle Ages (Yale) won the Charles Homer Haskins Prize from the Medieval Academy of America.

For all the virtues of From the Cast-Iron Shore, I wish that Oakley, with his non-American background, had found room for some words about the uniquely American practice of athletic recruitment, even in small liberal-arts colleges like Williams. Though the NCAA Division III schools have rules governing recruitment, Williams itself a few years ago stated that some 30 percent of all admitted students were recruited athletes, and I suspect that number is similar for other NESCAC (New England Small College Athletic Conference) schools. Yet there’s a difference between teaching students how to play sports, which is certainly part of our mission, and the need to produce winning teams, which might not be.

Finally, on a lighter note—that of odd coincidences—is a little domestic tale about the Oakley family horse, whose screams one night brought the whole family out to untangle the poor animal from some webbing that was entrapping her. I can’t help wondering if that was about the same time when, a hundred miles north of Williamstown, screams from our own family horse brought out me and my wife and our four pajama-clad girls, they holding flashlights while I managed somehow to cut away the bits of wire fence that had caught up Irish Maid’s right hind leg. This was one of many coincidences in this book that sometimes made me feel as if I had encountered not just a kindred spirit but a parallel life.