The First Shall Be Last 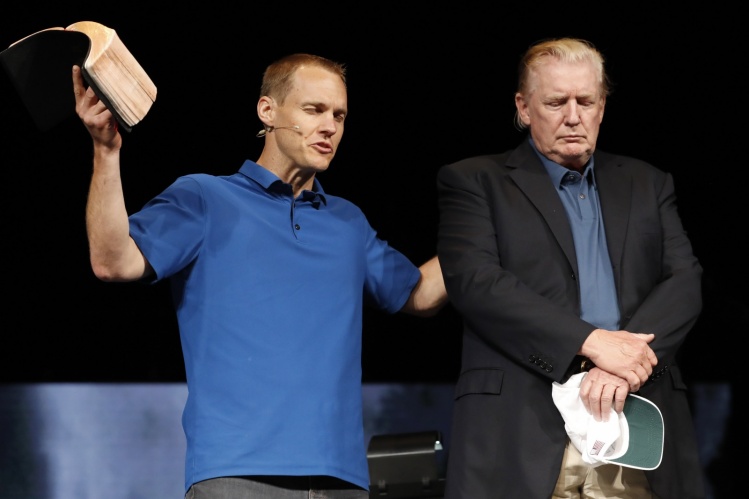 On Sunday, President Trump unexpectedly dropped in on a suburban D.C. megachurch after playing golf nearby. The picture of the pastor praying for him, Trump with his head bowed and eyes closed, the smiling pastor with one hand on Trump’s shoulder and the other holding a Bible, popped up all over the web, with predictably divided reactions.

Everyone needs prayer. Trump certainly does, not only because of his position and power, but because of his character. But the pastor, David Platt, shouldn’t have done it. Bringing the most powerful man in the world up to the front of McLean Bible Church is the natural thing to do, yes. But it’s the natural worldly thing to do.

I think we tend to underestimate how thoroughly Christianity upsets worldly hierarchies, which are based on power: political, economic, or social. David Bentley Hart wrote about this in his piece “Christ’s Rabble.” The church, especially, or paradigmatically, when it gathers for worship, is a radically egalitarian space. There, as Jesus said, the last shall be first. That’s not a pious sentiment or a metaphor for being kind to the people at the bottom. It is meant to be a fact.

When there’s a distinction of rank, it’s a distinction of holiness, but the holy don’t think themselves distinguished. Mostly the opposite. So as distinctions go, it’s not of much practical use. The hierarchies are only hierarchies of service. We speak more accurately of authority than of power when we speak of those in some way above the rest of us. Dante made this point by putting so many popes in hell.

And as it happens, we have direct apostolic instruction on this very matter of featuring the powerful in worship. In his epistle, St. James asks: “My brothers and sisters, do you with your acts of favoritism really believe in our glorious Lord Jesus Christ?” He seems to have had a shrewd idea of the answer:

For if a person with gold rings and in fine clothes comes into your assembly, and if a poor person in dirty clothes also comes in, and if you take notice of the one wearing the fine clothes and say, “Have a seat here, please,” while to the one who is poor you say, “Stand there,” or, “Sit at my feet,” have you not made distinctions among yourselves, and become judges with evil thoughts?

Look, he continues, God chose the poor “to be rich in faith and to be heirs of the kingdom that he has promised to those who love him. But you have dishonored the poor.” In treating the poor and rich indifferently, they fulfill Jesus’s command to love their neighbors as themselves. If they don’t, the law condemns them. James even adds a note almost of class struggle. “Is it not the rich who oppress you?” he asks. “Is it not they who drag you into court? Is it not they who blaspheme the excellent name that was invoked over you?”

Yes, we have apostolic and prophetic instruction to pray for political leaders (1 Timothy 2:1–2 and Jeremiah 29:7). That doesn’t even suggest singling out our political leaders for special attention. They are only one group among many that Scripture instructs us to pray for. The pastor invoked St. Paul’s instructions in a statement explaining his actions, but he misapplied it.

Trump popped in after the sermon, which might have done him more good than the prayer.
sharetweet

And notice that both St. Paul and the prophet Jeremiah instruct us to pray for our leaders for practical reasons: so our lives will be better, implying that political leaders can easily make them worse. They’re not special; they’re dangerous. Scripture’s general attitude to political power is skeptical and defensive. “Put not your trust in princes,” the psalmist famously says. As the rabbi’s prayer in Fiddler on the Roof goes, “May God bless and keep the czar…far away from us.”

But something different from that happens when we gather to worship, or to do anything else together. The young medical student Robert Coles wandered into the Catholic Worker house for the first time in 1952. He saw Dorothy Day sitting with a very drunk woman determined to have a conversation. He tells the story in the preface to his Dorothy Day: A Radical Devotion.

“When would it end—the alcoholic ranting and the silent nodding, occasionally interrupted by a brief question, which only served, maddeningly, to wind up the already overtalkative one rather than wind her down?” he asks. “Finally, silence fell upon the room. Dorothy Day asked the woman if she would mind an interruption. She got up and came over to me. She said, ‘Are you waiting to talk with one of us?’” Coles writes: “One of us: with those three words, she had cut through layers of self-importance, a lifetime of bourgeois privilege, and scraped the hard bone of pride.” And not only hers, but his. (I thank my friend Nicholas Frankovich for reminding of this story.)

The poor pastor was surprised by the visit. Trump popped in after the sermon, which might have done him more good than the prayer. The prayer wasn’t a bad prayer, and didn’t imply any political support for the president. In his message to his church, Platt suggests an evaluation of Trump’s relation to Christianity. He and another pastor talked to Trump backstage (that is the word he uses) before bringing him onstage. They “spoke the gospel in a way that I pray was clear, forthright, and compassionate,” he writes. At the end of the message, he asks, “Would you pray with me for gospel seed that was sown today to bear fruit in the president’s heart?”

He did his best. But he would have done much, much better to have simply said, “It’s good to have you, Mr. Trump. Just find a seat where you can.” That itself would have been a Gospel seed.