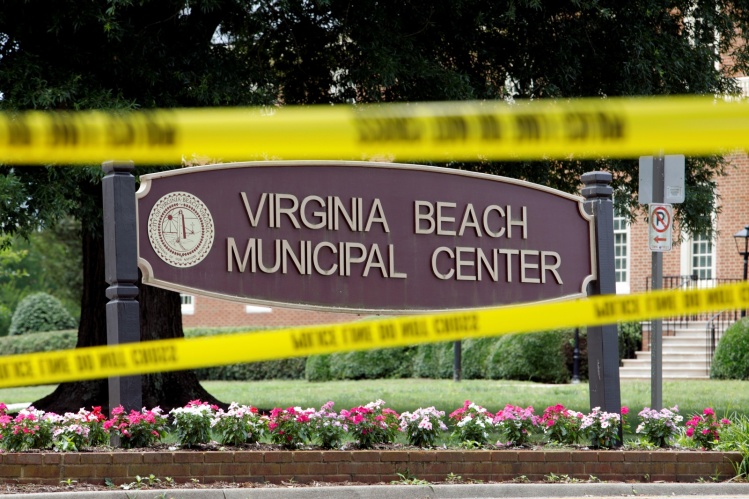 One of the entrances to the municipal government complex in Virginia Beach, where a shooting occurred May 31 (CNS photo/Jonathan Drake, Reuters)

If you want to know how things have rolled in Virginia on the firearms issue, consider that Gun Lobby Day is an unofficial but highly memorable event held every year at the state capitol on Martin Luther King Jr. Day.

“That was so wrong for so many reasons,” Jennifer Wexton, a former state senator who is now a member of Congress, observed about the timing of the pro-firearms offensive. Wexton, first drawn to politics in part by her desire for tougher gun laws, said that the state Senate’s Republican leadership would “put up all the gun bills on that day and kill them, one after another.”

It was quite a spectacle, said State Sen. Janet Howell, who, like Wexton, is a northern Virginia Democrat. “We would have citizens wandering the halls carrying Uzis and other assault weapons,” she said. “That was Virginia, darlin’.”

But it may not be Virginia anymore, or so Wexton, Howell and other advocates of gun safety hope. On Tuesday, Gov. Ralph Northam announced he was calling a special session of the state Legislature to take up a package of gun-control bills in the wake of last week’s mass shooting in Virginia Beach. They include many measures that Republicans, who narrowly control both houses of the state Legislature, have smothered in committee before.

They may try to do this again. But it will be harder with an election looming this fall and the power on the gun issue shifting toward those who favor regulations that only the most fanatical gun-rights advocates would question. They include background checks, restrictions of silencers and bump stocks, and “red flag” laws allowing families to seek the removal of firearms from those they fear pose a danger.

The changing politics on guns reflect a response to the pace of the threats—and to personal experiences.
sharetweet

Democrats need to pick up only two seats in each body to take control of the House and the Senate, and after years in which opponents of gun-safety laws had the upper hand in mobilizing and organizing, the energy has switched sides. Wexton says she noticed a large shift after the shootings at Marjory Stoneman Douglas High School in Parkland, Florida. “We saw that people were really getting involved in taking on this issue after Parkland,” she said, “and it didn’t go away.”

“It’s clear from several recent elections that there’s been a sea change from the old arithmetic that the only people who vote on guns are pro-gun,” said Geoff Garin, who has polled for Democratic candidates in Virginia—Northam among them—for three decades. In his successful 2017 campaign, Garin said, Northam “leaned into support for gun-safety legislation and used his F-rating from the National Rifle Association as a badge of honor.”

Former Gov. Terry McAuliffe, Northam’s predecessor and fellow Democrat, notes that he, too, was elected with an F from the NRA—“I’m proud of it,” he told me. It was a sign, he said, the state had “evolved on guns.” Further evidence for this came from 2018 exit polling. Sen. Tim Kaine, D-Va., who also faced strong opposition from the NRA, won eighty-two percent among voters who said they cast their ballot on the basis of the gun issue, far exceeding his fifty-seven percent statewide reelection total.

Almost all of McAuliffe’s gun proposals were killed by the GOP, but Rep. Gerry Connolly, D-Va., said that the special session called by Northam puts the party’s gun-control foes in a more difficult position.

“Entirely of their own making, the Republicans in the General Assembly are in a pincer,” Connolly said. “Either they act on the governor’s proposals, which are going to be sweeping, or they risk the rage of the electorate. ... The patience of the electorate on these issues has been tested, strained, and is at the breaking point.” Connolly added that Republicans might look for “the path of least resistance” by passing a few modest measures, such as outlawing silencers.

The changing politics on guns reflect a response to the pace of the threats—and to personal experiences. Democratic state Sen. Jeremy McPike told of his daughter’s suburban high school going on lockdown at the end of April after a gun was fired. “As the parent of a kid who was in lockdown, it’s real and it’s frightening to see that nothing’s getting done.

“It’s devastating as a parent that we can’t do better,” he added. “Where do you draw the line?”

It’s your move, Virginia. The special session calls for a different kind lobbying day, one more in keeping with the spirit of nonviolence that Dr. King preached before he was gunned down.