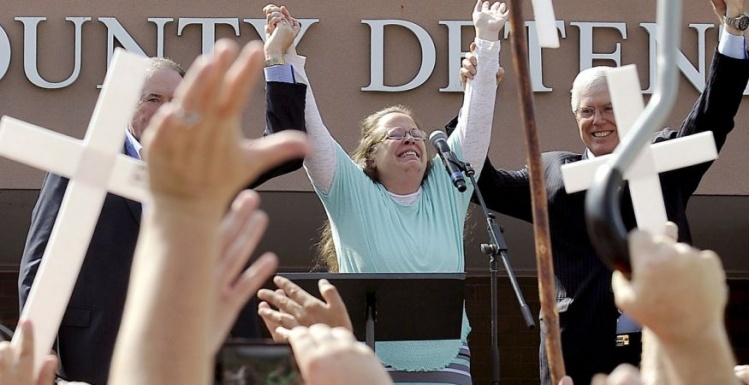 The huge wave of affection and delirium that Pope Francis generated with his triumphant visit to the United States last week could suddenly vanish in a cloud of smoke.

And we’re not talking about sweet-smelling incense.

Vatican spokesman Federico Lombardi, SJ, confirmed on Wednesday that the pope held a secret meeting with Kim Davis during his trip. She’s the Kentucky court clerk who was recently jailed for refusing to issue marriage licenses for gay couples. The fifty-year-old Apostolic Christian said signing such licenses violates God’s law and her own conscience.

Davis’s lawyer said Vatican officials initiated the private meeting between his client and the pope (naturally, we’d all like to know who!), during which Francis expressed support for the clerk.

The encounter took place on the afternoon of September 24 at the apostolic nunciature (Vatican embassy) in Washington, D.C., just before the pope left for New York.

This new revelation will leave many people scratching their heads in disbelief and wondering what in God’s name Francis is up to. Because throughout his six days in Washington, New York, and Philadelphia he was careful to downplay—and even avoid mentioning—the many hot-button issues that are the bull’s eye of America’s so-called “culture warriors,” for whom Kim Davis has become a celebrity and icon.

Americans who disagree with Davis, including many Catholics, were enraptured with Pope Francis precisely because he did not publicly wade into these issues or lend support to the cause she and her supporters are trying to take forward.

Some of them will now think that the “people’s pope,” as the fawning American media continuously called him during the visit, is either two-faced or being duped by his advisors.

“He’s made a basic mistake by buying into a local argument about which he knows next to nothing,” said a leading Catholic figure and well-known ally of the Argentine pope. “Francis is not only a bishop, but also a head of state,” said the cleric, who asked not to be named.

But others were willing to cut the pope some slack, including progressive-minded Catholics, like John Gehring of Faith in Public Life in Washington.

“Pope Francis is not a pawn in the culture wars,” Gehring said in a Tweet. “We diminish his visit and papacy when we see him as a cheerleader for our favored agendas.”

That’s not how Kim Davis sees it. In an interview on Wednesday with a U.S. television station, she said: “Just knowing that the pope is on track with what we’re doing, it kind of validates everything.”

Pope Francis will re-convene the Synod of Bishops on Sunday with a Mass at St. Peter’s Basilica. The liturgy is the official start of a three-week-long assembly to discuss issues pertaining to marriage and the family.

It’s the second time in twelve months that Francis has called the synod into session to continue looking at ways of supporting Catholic family life. During the two-pronged approach he has also encouraged the bishops to discern new possibilities for reconciling (with the church) those Catholics who are not living in conformity with ecclesial marriage norms.

This, of course, includes divorced and civilly remarried members of the church, as well as those who are cohabitating or, as in places like Africa, are polygamous (yes, men with more than one wife, and not vice-versa). This last category is something few African bishops wish to talk about. Neither do they want to even acknowledge the existence of homosexuality (especially among the clergy), which, with a straight face, they vehemently deny.

Instead, a number of these African prelates—led by Guinean Cardinal Robert Sarah, head of the Congregation for Divine Worship—have been almost single-minded in preaching fire and brimstone against bishops from other continents (led by German Cardinal Walter Kasper) who are encouraging a development of doctrine on divorce and remarriage.

Cardinal Sarah and his friends in the “no change,” or semper idem, camp, such as Cardinal Raymond Burke, are noticeably terrified that the head of the synod—that would be Pope Francis—is sympathetic to Kasper’s “reform” or “doctrinal development” wing.

So with the help of a group of Catholic traditionalists outside the synod, including journalists and so-called intellectuals, they have mounted a feverish campaign to discredit anyone and everything that appears, even in the slightest, to be supportive of Cardinal Kasper.

Their latest target is once again Cardinal Godfried Danneels, the retired Archbishop of Malines-Brussels. They have sought to smear the Belgian cardinal and theologian for a recent authorized biography in which he reveals that he was part of a small group of cardinals that gathered regularly in the early 2000s to strategize ways for advancing a reform agenda at the highest levels of the church. Nefariously, they have insinuated that these gatherings—which seem to have advanced an agenda as radical as Evangelii Gaudium (and the Gospel itself!)—made these cardinals disloyal dissidents.

They are not at all happy that Pope Francis personally appointed Cardinal Danneels, eighty-two, to be a voting member at the two synod assemblies on the family. And they are probably still bristling that the pope, on the night of his election in March 2013, asked the Belgian to join him on the central loggia of St. Peter’s Basilica when he was introduced as Bishop of Rome.

Speaking of the Synod of Bishops…. Its secretary general, Cardinal Lorenzo Baldisseri, will brief reporters on Friday about the theme and method of the upcoming assembly on the family.

Don’t fool yourself into thinking this is something fairly lame or just another boring press conference. Even if the cardinal does not unveil any earth-shattering reforms to the synod’s structure this week, don’t think they’re not coming.

It’s no secret that Pope Francis would like to see the synod transformed into a more dynamic body that meets much more frequently than the once-every-three-year cycle that Paul VI set in 1965 when he established this permanent structure in the church.

The Jesuit pope has said there should be more fluid discussion and debate during the synod sessions, and it is likely that Cardinal Baldisseri will announce methodological changes that will seek to make that happen at this upcoming assembly.

Francis has also said that, in addition to convening the synod more frequently, it could be possible to use electronic means of communication to keep discussions going between the sessions, that is, when delegates return home.

It’s probably too early for the secretary general to announce these types of changes. But there are good reasons to believe that they will eventually be implemented.

And maybe Pope Francis, instead of Cardinal Baldisseri, will announce them sometime during this upcoming assembly. It would be a good way to mark the fiftieth anniversary of the synod.