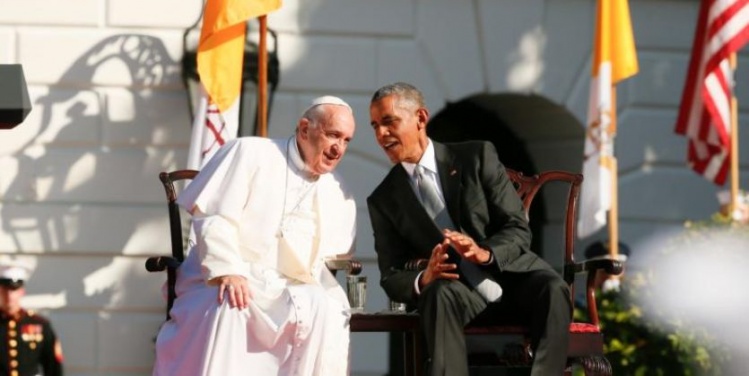 WASHINGTON, D.C. — Pope Francis has finally arrived in the United States of America.

And the “land of the free and home of the brave,” as anyone who has ever been here can imagine, has responded with characteristic enthusiasm—at least here in the Mid-Atlantic states he'll be traveling to on his six-day visit.

Francis landed at Andrews Air Force Base outside this city on Tuesday afternoon amid heightened security measures that locked down much of the U.S. capital and left foreign reporters wondering if they had arrived in a police state.

Organizers say nearly eight thousand journalists and other media personnel have received credentials to cover the papal events this week. That’s significantly more than the 5,500 or so media credentials the Vatican gave out for the last conclave.

But there are many, many others here to pontificate about the pontiff in the blogosphere, on television, and via the seemingly infinite array of “publications” in print and on the Internet. This has sparked a competition to see who can make the biggest splash during the pope’s visit.

For these few days “journalists,” pundits and other so-called “experts” are providing the media-saturated, “infotainment”-craving U.S. market with a smorgasbord of facts, analysis, and opinion on Pope Francis, his words, and his gestures. Suddenly, the American media have discovered that a Catholic church exists beyond any and all of its recent sex abuse and financial scandals.

This is certainly to be welcomed.

But there is also something troubling about the coverage the visit is getting. Peter Steinfels, one of the most highly regarded religion writers in the country, said it best in Politico this week:

I’m exactly the sort of Catholic who should be cheering for Pope Francis’ historic trip to the United States—but instead I’m dreading it…  Rather than drinking in the spectacle this week, I’m tempted to turn off the TV, close my laptop, leave the newspapers unread and keep the radio tuned to classical music. My discomfort is by no means with Francis himself, but with how this trip will inevitably be politicized—and not just by the pope’s conservative critics but by liberal Catholic fans like me.

This is an excellent article that thoughtfully explains—among other things—that “Catholicism is bigger than one man” and that the church is not the pope. I suspect Pope Francis would not disagree with a single line that Steinfels wrote.

The pope goes to the Big Apple on Thursday evening local time and St. Pat’s will be his first stop.

“He’s going to drive up to it, and I hope he’s going to say, like more and more New Yorkers are saying, ‘Wow,’ when he sees the splendor and the radiance of this magnificent structure,” said the gregarious cardinal.

Well, good luck. But I doubt Dolan is betting the archdiocesan cemetery fund on getting such a reaction from the pope of the poor.

But you can’t blame him for hoping.

After all, the restoration of the 135-year-old neo-Gothic temple cost $177 million. (That ain’t exactly chump change; it’s more like Trump change.) And given that only $100 million has been raised so far, the cardinal is no doubt praying that Francis will at least refrain from repeating some of his anti-capitalist and anti-consumerist admonishments that have dismayed wealthy Catholic donors.

No matter what the pope says, it’s hard to imagine him getting overly excited about the glories of St. Patrick’s. He is drawn more toward disfigured people than sumptuous church buildings.

“We’re not talking about luxury,” said Cardinal Dolan in defense of the cathedral’s expensive restoration project. “We're talking about repair. Literally, stones were falling. And literally, our insurance people were saying, ‘If you don't do some repair, we may have to close it.’”

The sixty-five-year-old St. Louis native and “creative conservative” has been in New York since 2009. He launched the cathedral restoration three years after his arrival in Gotham.

That was just a month after he got his red hat at the February 2012 consistory in Rome, an event that launched him as an international media superstar and led many to begin calling him the “American Pope.”

But Cardinal Dolan’s star began plummeting spectacularly just a month after the 2013 conclave. That’s when the newly elected Pope Francis skipped over the former North American College rector and 2010 usurper of the national bishops’ conference presidency and, instead, chose Boston’s Cardinal Sean O’Malley as the U.S. member of his C8 group of special advisors.

Luckily for Cardinal Dolan, the United Nations is in New York. Because speaking at the international body is the main reason the pope is coming to his diocese.

In the famous interview with Civiltà Cattolica and other Jesuit publications just a few months after his election as Bishop of Rome, Pope Francis said he had “never been a right-winger.”

He obviously felt he needed to say that because at the time the impression a lot of church watchers had (and even more so many of his fellow Jesuits) was that the new pope was extremely conservative, especially in church matters.

His disavowal of that was a great relief to so-called Vatican II Catholics and the overall content of the interview was a masterstroke that won him the near unflinching support of once-skeptical Jesuits all over the world.

Now thirty months into his pontificate, Francis is trying to shuck off another label that some have affixed to him—that he’s a Marxist, or at least a very liberal Socialist. Of course, in the United States the only thing worse than that is being called a “commie.”

Why is the pope suspect?

It’s because he continues to condemn the “unbridled capitalism” and the global financial model, which he calls “an economy that kills.” He has put forth a moral case for a “more equitable distribution of wealth” and has made all sorts of other statements that aren’t exactly a ringing endorsement of venture capitalism or the consumerist society on which it thrives.

On his plane from Havana to Washington on Tuesday, Francis said: “Maybe there’s an impression I’m a little bit more leftie, but I haven’t said a single thing that’s not in the social doctrine of the church.”

That explanation is unlikely to convince people who have criticized the Argentine pope for the economic and political views he’s articulated—even the Catholics among them.

But perhaps their real beef is with the church’s social doctrine. Francis is just an easier target for that.