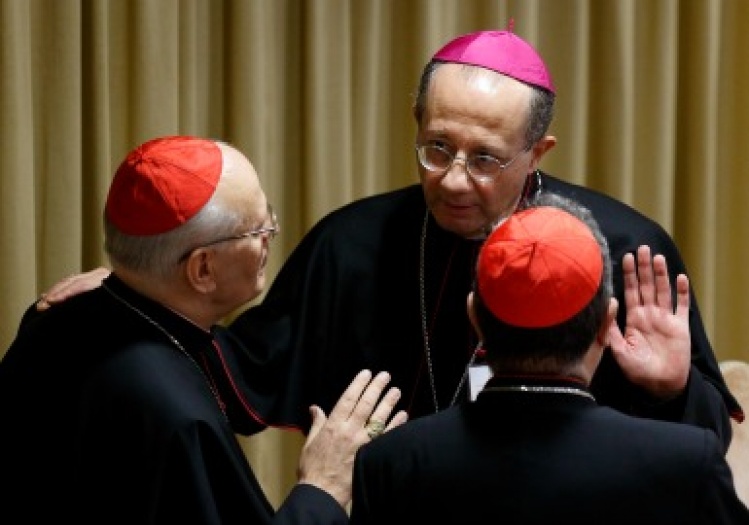 It was a real snorer, even as Vatican press conferences go. On June 23, three officials from the Synod of Bishops unveiled a largely underwhelming working document (instrumentum laboris) for this coming October’s session on the “vocation and mission” of the family. This is the text that is supposed to guide Round 2 of what is looking to be first big ecclesiastical battle of the 21st century. (Spoiler alert: the document is not an official or even unofficial policy statement of the Vatican or the Catholic Church—it is a discussion paper.)

Cardinal Lorenzo Baldisseri, the Synod’s secretary general, said the 78-page document was a composite of the final report (Relatio Synodi) from last year’s Extraordinary General Assembly on the family and the collected responses to some forty-six follow-up questions about it. Baldisseri said ninety nine organizations that have voting members in the Synod (bishops’ conferences and conferences of male religious superiors) responded to the questionnaire. Catholic parishes, various associations and numerous individuals and families sent in a further 359 “observations.” Cardinal Péter Erdő, the Synod assembly’s “relator general” or chief rapporteur, and Italian Archbishop Bruno Forte, its special secretary, then highlighted different sections and aspects of the newly compiled working paper. But only those who believe in Santa Claus could even think that these more than 450 submissions are faithfully expressed in this slim booklet—which, by the way, was released only in Italian. (Synod officials promise translations will quickly be made available.)

There is nothing eye-popping in the instrumentum laboris. And it is most likely that the men who run the Synod secretariat designed it that way so as not to pour more fuel on an already fiery argument between bishops who are pushing for a “development” of Church doctrine and praxis on questions regarding marriage and human sexuality and those bishops who want to reinforce the status quo. Catholics, no matter what position they support, should not lose a wink of sleep over this document. That’s because the working paper does not have the same weight as it did at Synod gatherings in the pre-Francis era, when the entire sleep-inducing exercise was to carefully add words and paragraphs to a Roman Curia-drafted outline that would inevitably end up becoming the pope’s post-synodal apostolic exhortation. That is not likely to happen this time.

If there was any real news that came out of the June 23 press conference it was that more changes have been made to the Synod’s procedures to eliminate the practices of bishops reading papers to each other in endless succession, favoring instead more spontaneous interaction, especially in small groups. Cardinal Baldisseri was purposely vague about the changes, saying they would be “appropriately revealed” in September. They will be crucial to eventually transforming the Synod of Bishops into a body of true collegial governance under the guidance of its president, the bishop of Rome.

But no matter what happens to the Synod structure or in the debates next October, some of the Pope Francis’s allies are already concerned that his pontificate could be seriously derailed if divorced and civilly remarried Catholics are not welcomed back into the sacramental life of the Church (at least in some cases). Francis, after all, opened the discussion and has on numerous occasions given every indication that he wants bishops to find a way toward making this happen. The pope’s supporters worry that if he allows the Synod on the Family to end in merely rubberstamping the status quo, it could cause widespread disillusionment among Catholics. Said one of them to me, with a grimace, “Think Humanae Vitae.”

Speaking of family matters, hundreds of thousands of Italian Catholics descended on the large square in front of Rome’s cathedral, the Basilica of St. John Lateran, on June 13 for a rally spearheaded by a group called Defendiamo i nostri figli (Let’s defend our children).

The purpose of their gathering—which they dubbed in English, “Family Day” —was to tell national lawmakers that they want Italy to remain the last country in all of Western Europe that does not legally recognize same-sex unions. Yes, this was a mega-demonstration against yet another bill in the Italian parliament (one that failed several years ago) to legalize civil unions, whether between heterosexuals or homosexuals. It was also a protest against a parliamentary bill to mandate sex education courses—for the first time ever—in Italy’s state schools. The proposed legislation is partly aimed at respecting sexual and gender differences, combating sexual stereotypes and curbing the increased incidents of harassment and bullying of gay Italian young people.

Without calling into question the good will or intentions of the individual participants, the gathering seemed like an exercise in fear-mongering through the use of misleading, erroneous, and emotionally-charged rhetoric. The takeaway of the event could be summed up by two of the most popular slogans seen on placards and banners—“No to gay marriage” and “No to gender theory in schools.” Of course, there is no such gay marriage bill before the Italian parliament and insinuating the contrary was merely a deceitful ploy aimed at scaring the majority of Italians who, according to opinion polls, favor legal unions for gays, but not marriage.

Evoking gender theory is bit trickier, if also more sinister. Part of the problem is that there’s a general confusion in Italy over the distinction between gender studies (which many U.S. Catholic universities, including Notre Dame, have had for many years in their curricula) and gender theory, which is complicated and controversial. Influential advisors to the Vatican (like many Italians) tend to use the terms synonymously and describe them over-simplistically; some call them diabolical, too. Even Pope Francis appears to be of the same mindset. The organizers of Family Day capitalized on this.

But there were polemics among the country’s Catholics. The Italian bishops’ conference and most lay Catholic organizations—which usually marshal large crowds for specific events—did not officially back this one. That led to claims that the huge turnout (a million people, according to organizers) was a spontaneous response on the part of individuals. Unfortunately, this was another bit of disinformation that the organizers did nothing to refute.

The truth is, there would have been a much, much smaller turnout had it not been for Kiko Argüello, founder and charismatic guru of the Neocatechumenate Way, a quasi cult-like and not uncontroversial movement. It is estimated that well over 200,000 people belong to one of the estimated 5,000 small communities found in more than a thousand parishes in Italy. Kiko—who incidentally is neither married nor an Italian— “commanded” his troops to come to Rome last Saturday for Family Day, and they did…spontaneously, of course.