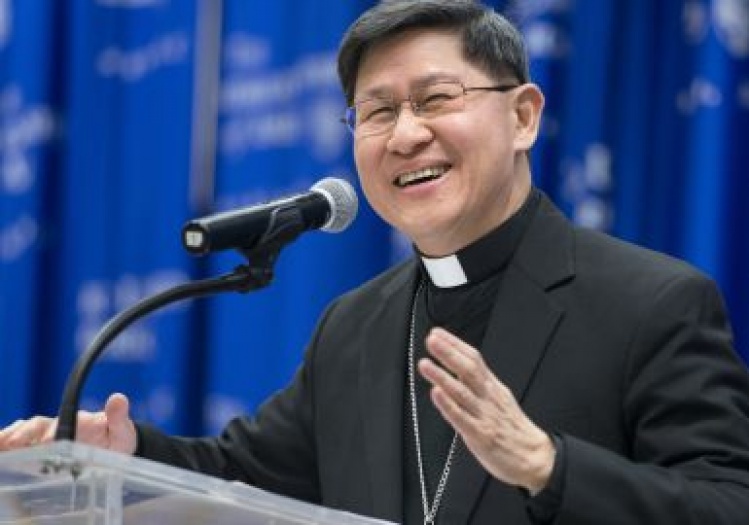 Cardinal Luis Antonio Tagle of Manila, arguably the most prominent voice today in the Asian Church, is about to get a global pulpit. In just two weeks’ time the man many see as a possible future pope should be the new president of Caritas Internationalis (CI). Delegates of the one-hundred-and-sixty-four-member confederation will be in Rome from May 12 to 17 to hold their twentieth general assembly, and it’s expected that they will select the charismatic fifty-seven-year-old Filipino to take over from Honduran Cardinal Óscar Rodríguez Maradiaga. The seventy-two-year-old Salesian, coordinator of Pope Francis’s Council of Cardinals (C9), is stepping down after a whirlwind eight years as president. He transformed the normally ceremonial post (which is not based in Rome) into a high-profile position that made him, arguably, the church’s leading advocate of Catholic social teaching and human development in the international arena. Although Cardinal Tagle’s candidacy to replace him has not yet been made public, a Vatican source said he was one of two candidates the Secretariat of State has approved to stand for the CI presidency. The other is Lebanese-born Archbishop Youssef Soueif, fifty two, leader of Maronite Catholics in Cyprus. The Caritas general assembly formally begins with a Mass in St. Peter’s Basilica on the evening of May 12. And for the first time ever, it will be presided over by the pope. It is believed that Cardinal Rodríguez, whom some have dubbed the “vice pope” for his seemingly nonstop globetrotting to promote the reform-minded agenda of the current pontificate, easily convinced Pope Francis to lead the liturgy. The election of the new CI president takes place on May 14. The Vatican source said Michel Roy, a sixty-one-year-old French Catholic, is running unopposed for re-election as the Rome-based Secretary General. Both offices are four-year terms. The theme of the general assembly is, “One human family, caring for creation,” and speakers include the father of Liberation Theology, Fr. Gustavo Guttiérez.

Pope Francis may not have done much (at least so far) to promote women to key posts in the Vatican, but he sure is speaking out in defense of women’s rights. At his latest general audience he said Christians have a duty to fight for women to get equal pay for equal work. “Why do we take it for granted that women should earn less than men?” he said in customarily off-the-cuff remarks. “No! It’s the same right. Disparity is a pure scandal!” he said to applause and cheers from the tens of thousands of people that gathered for the audience in St. Peter’s Square. The pope has been using the recent Wednesday audiences to share his thoughts and spark deeper reflection on the nature and role of the family in its various components. Last week he began exploring the meaning of reciprocity and complementarity between men and women. And he acknowledged what he’s already admitted on other occasions – that not nearly enough has been done to include women at all decision-making levels in the church and society. This week he spoke about the decrease in marriages, the increase in separations, and the dwindling number births in many parts of the world. “It’s a fact that people are marrying less and less; this is a fact: young people don’t want to get married,” Francis said. He said partial factors for this could include economic constraints or the innate mistrust of marriage that people growing up in broken homes sometimes experience. But, what is sure to surprise some, he refused to blame the crisis of marriage on the women’s liberation movement, though he didn’t use those exact words. “Many people hold that the changes these past decades were put into motion by the emancipation of women. But this argument is not valid, either. It’s an insult!” he said, again to loud applause. “It’s a form of machismo, which always tries to dominate women.”

The Pope’s words on women have instilled a lot of hope in many people. “With Pope Francis this is a special moment of new possibilities for women in the church,” says Monica Jiménez de la Jara, Chile’s ambassador to the Holy See. Described as possessing a “volcanic enthusiasm,” the effervescent envoy put together an impressive international conference on Tuesday, titled, “Women in the Church, Perspectives in Dialogue.” The seventy-four-year-old widow and mother of five is a former Catholic university rector and minister of education. She’s has been in Rome a little less than a year, but is already fast becoming the leading woman ambassador at the Vatican. With the help of Franciscan Sr. Mary Melone, the first woman ever to be rector at pthe Pontifical University in Rome, she was able to draw more than two hundred women (and a good number of men, as well) to the daylong conference. It was held at the Pontifical University of Sant’Antonio (“Antonianum”), which Sr. Melone oversees. The U.S., British, and European Union embassies to the Holy See also sponsored the event, which gathered women from every continent. Many of them were religious sisters; a number of others were Vatican employees, while still more were diplomats. After a number of addresses in the morning session, participants broke into ten discussion groups in the afternoon. Their task was to come up with three issues that most resonated with them and then offer three proposals to carry the ideas forward. Almost every group reported discussions that were lively and sometimes heated. One woman told me she was most surprised at how forcefully a number of African sisters pushed equality issues in the church that conservative bishops often disregard as the agenda of Western feminists. These are just a few things the conference would like to see happen for women in the Church: a more open discussion on gender and gender ideology; greater roles in mediation and consultation; a theology with women, not on women; greater presence of women in forming seminarians; a synod with or for women. One group even suggested that Pope Francis have a woman preach his annual Lenten retreat with the Roman Curia! One thing is certain: they are holding the pope to his promising words on the need for a greater role for women in the church. And they have begun to engage a growing number of people with influence at the Vatican to see that he acts on them.