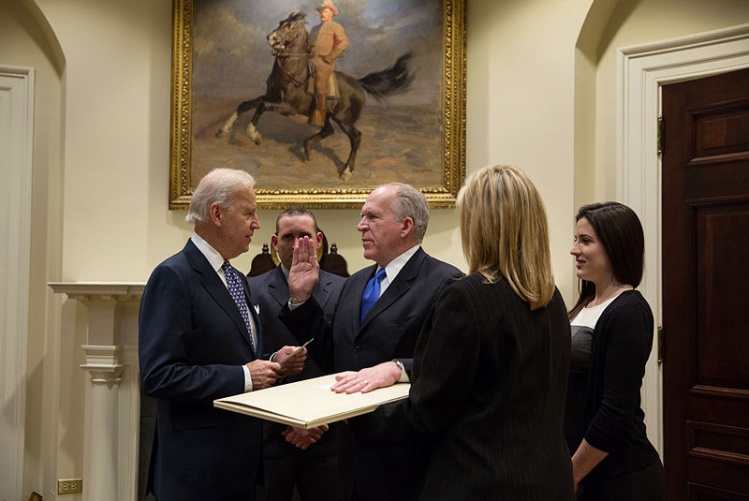 Fordham students and faculty gathered last Thursday to present a petition to Fordham president Fr. Joseph McShane, S.J. to revoke the honorary degree granted to CIA director John Brennan in 2012. The video below covers the event.

The petition indicts Brennan for his complicity in war crimes of “enhanced interrogation” and “extraordinary rendition”—euphemisms for torture and kidnapping. He has publicly defended these practices:

As Director of the CIA, Mr. Brennan continues to defend the use of torture. In a formal response to the Senate report, he praised CIA officers for acting “in accordance with the legal and policy guidance they were provided.” Mr. Brennan is referring to the “torture memos,” a series of discredited legal briefs produced under the Bush administration that wrongly permitted such atrocities as rectal feeding, isolation, physical beatings, exposure to extreme temperatures, and sexual humiliation. Moreover, despite the Senate report’s unequivocal condemnation, Mr. Brennan remains willing to torture others in the future. Asked whether he would endorse further uses of torture, Mr. Brennan replied, “I defer to policymakers in future times.”

The petition only mentions Brennan’s most egregious violations of human rights and Catholic moral teaching (including Fordham’s mission statement).  As Deputy National Security Advisor to President Obama, Brennan has been a "chief architect" and defender of President Obama’s extrajudicial drone campaign, about which he falsely claimed in 2011, “there hasn’t been a single collateral death.” Brennan has recently made the news when the CIA illegally hacked into Senate computers. He then denied this to Andrea Mitchell of NBC News: "As far as the allegations of, you know, CIA hacking into, you know, Senate computers, nothing could be further from the truth. I mean, we wouldn't do that. I mean, that's—that's just beyond the—you know, the scope of reason in terms of what we would do."

We will see in the coming months if Fr. McShane and other Fordham leaders decide (however belatedly) to practice the Jesuit ideals they proudly profess.