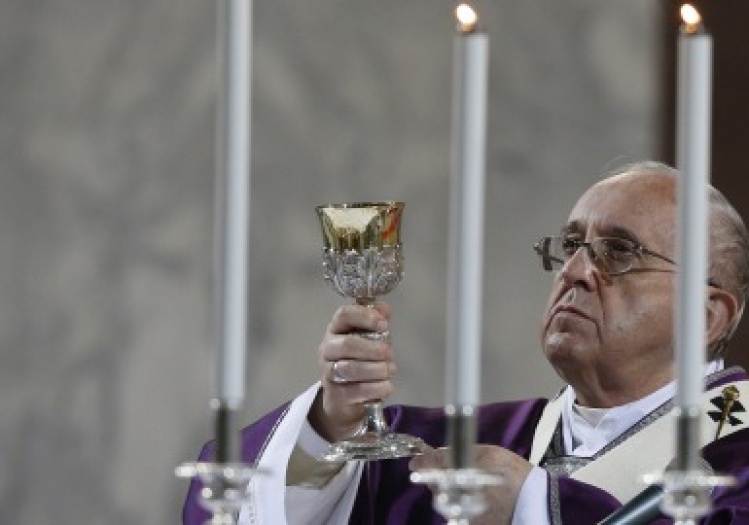 New Ways Ministry, self-described as a “gay-positive ministry of advocacy and justice for lesbian, gay, bisexual, and transgender (LGBT) Catholics,” sponsored a pilgrimage to Rome last week for nearly fifty people. Its executive director, Francis DeBernardo, said they enjoyed “surely the most official welcome from church officials that New Ways Ministry has received in its thirty-eight-year history.” He said the pilgrims – led by Loreto Sister Jeannine Gramick, who co-founded the organization in 1977 – were given “VIP seating” at the papal audience on Ash Wednesday in St. Peter’s Square. Unfortunately, VIP doesn’t mean quite what it once did. Not with Pope Francis, who prefers spending most of his time before the audience riding through the crowd, lumbering down from his jeep every so often to personally greet people. There was no such greeting for the New Ways pilgrims in the once-coveted VIP section. The Vatican did not even properly acknowledge them, but announced them merely as “a group of lay people accompanied by a Sister of Loreto.” Don’t ask. Don’t tell…. A similar pilgrimage from England, sponsored by LGBT Catholics Westminster (also known as the Soho Masses), was also in town, and another journalist and I were invited to speak to both groups about “Reporting a Reforming Pope.” As a gay Catholic (I think the only openly one among Rome’s Vaticanisti), this was a great pleasure since a number of dear and longtime friends were in both contingents. But I must confess, at the risk of angering some of them, I was not as sanguine as they were about the so-called “warm welcome and support” they got from church officials. I’m not sure why the English pilgrims were so delighted with the greeting the Cardinal Archbishop of Westminster sent them. It did not even have a proper salutation. And it was so safely generic that it could have been addressed to any group of Christians hailing from any place in the world. The Caravita Community, which boasts that it exists to “especially welcome those who have in any way been estranged from the church or marginalized,” gave the English group a similarly vague (and safe) acknowledgement. The priest-presider at last Sunday’s Mass welcomed the LGBT pilgrims as a “group from Westminster.” Period. We gay and lesbian Catholics should expect more from our ordained brothers because, as a number of studies have shown, many of them are homosexually oriented just like us.

Speaking of the ordained… Pope Francis seems to have had some harsh words for bishops who are inclined to lay hands on just about anyone (for the purpose of conferring Holy Orders) – especially among those who support the Tridentine Mass and the so-called “reform of the reform” of the liturgy. I say “seems,” because the “harsh words” came to us second- and third-hand from a closed-door meeting the pope had the day after Ash Wednesday with priests of the Diocese of Rome. According to the Zenit News Agency, an apostolate of the Legionaries of Christ, Francis said there were some “saints” among those priests and bishops that speak of “a reform of the reform” and they do so “in good faith.” But he said they were “mistaken,” stressing that some of these same prelates sign up “traditionalist” seminarians who were kicked out of other dioceses. According to Zenit, he said bishops accept because they seem “very devout,” only to later show signs of “psychological and moral problems.” Ordaining them, he said, is like placing a “mortgage on the church.” Naturally, they ordain such men because there is an acute priest shortage that keeps getting worse. In the good old days of John Paul II, it was well known that bishops with lots of seminarians and large ordination classes were promoted to more prominent dioceses. The list is long of loyal churchmen who were catapulted into major sees and even got red hats because they filled their seminaries with anyone who promised to be celibate, not to ask questions and – at least on the surface – jumped willingly through the hoops. All too often these careerist bishops bequeathed to their poor successors with a disaster in the waiting.

The Shroud of Turin, the alleged burial cloth of Jesus Christ, will be going on public display for the first time in five years from April 19 to June 24. This is only the sixth time in over a hundred years. And for the occasion the local ordinary, Archbishop Cesare Nosiglia, recently decreed that priests who hear confessions in his territory will be permitted to absolve and remove excommunication from all penitents who confess to having been directly involved in procuring an abortion. This is great news. But why limit this magnanimous and merciful act to only ten weeks? Perhaps the bigger question is why he has even put the shroud on display so quickly after its last public showing, which was in 2010. Perhaps because this exhibition, just as the one five years ago and the one a decade before that, usually entices a papal visit. Archbishop Nosiglia has not yet hosted a pope. When he was appointed to Turin in October 2005, the visit of Benedict XVI several months earlier was already forgotten history. Then Pope Francis was elected in March 2013, and in late October 2013 the Vatican said he would create his first group of still-unnamed cardinals at a consistory to be held in February 2014. But before the pope announced the list of men who would get the red hat, Archbishop Nosiglia surprised people by making his own announcement in December 2013, saying there would be an “extraordinary” showing of the shroud in the spring of 2015. “We trust that during this time Pope Francis will come to pray before the sacred linen,” he said. (He will, on June 21.) But in neither of his two consistories has Francis given the red hat to Cesare Nosigilia, head of one of the prominent Italian dioceses traditionally headed by a cardinal. If the pope was not enticed to do so by the archbishop’s decision to have an extraordinary showing of the shroud, perhaps he will be now by his decision to show greater mercy to women – as he says in Evangelii Gaudium – who in “very difficult situations” and in “profound anguish” have had abortions, while the church has “done little to adequately accompany” them.