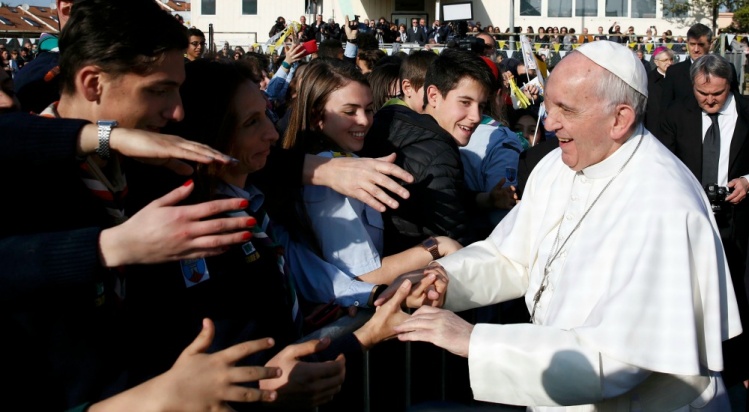 Pope Francis has now completed his fourth year as Bishop of Rome. And in the run-up to the milestone today (Monday), he and top officials of the Roman Curia spent the preceding week in prayer and reflection at a hilltop retreat center south of the Eternal City.

There an Italian Franciscan preached the spiritual exercises that the pope and the curia make every year during the first week of Lent.

It is only by coincidence of the liturgical calendar that this year’s retreat immediately preceded the anniversary of Francis’ election as if it were a necessary prelude or preparation for it.

Nonetheless, it was a happy and fitting coincidence. And, no doubt, it’s one that allowed the pope to put aside his daily work and prayerfully take stock of the past four years.

But more importantly, the weeklong retreat was surely an opportunity for Francis to engage in deeper discernment—a time to ponder how the Holy Spirit is prompting him to more faithfully carry out his papal ministry of guiding the church and bringing God’s love, mercy, and reconciliation to the entire world.

While the pope was on retreat, I was in South Africa—to the peripheries of our still so Euro-centric church, if you will— to give a series of talks on the many different aspects of the current pontificate, especially how this pope has tried to plant the seeds of deep and lasting renewal and reform of the church.

South Africa’s Jesuit Institute and its only Catholic broadcaster, Radio Veritas, invited me to address a variety of audiences in Johannesburg, Pretoria and Cape Town. They put this modest speaking tour under the banner, “Shout it from the rooftops: The Catholic Church’s new voice under Pope Francis.”

It was a good opportunity to share my impressions of history’s first Jesuit and New World pope and to point out some of the highpoints (and not-so-high points) of his whirlwind pontificate.

It was also extremely valuable for me to listen to people far, far away from that little ecclesiastical village called the Vatican express their own “joys and hopes, sorrows and anxieties,” especially as they relate to the pope and the church.

I reminded my audiences (and my readers) that I’m not an apologist for Pope Francis or public relations agent for the Holy See. I am actually more like a sort of pope-or church-critic, similar to those who critique art or films or food and wine. These are people who love the subjects they cover, but must honestly analyze and evaluate those subjects.

In South Africa, I shared many of the impressions I’ve developed of Pope Francis over these past four years. They are opinions or perceptions born of watching him up close and from listening to his many addresses, homilies and spontaneous remarks.

What does one say about such an energetic, reformist and, yes, disruptive pontificate in a brief talk or even a short series of lectures? How does one summarize it?

There are so many aspects of what Francis has done (and even some of what he has failed to do) in a mere forty-eight months as Bishop of Rome and chief shepherd of the Universal Church.

The themes and issues he has tried to push to the top of the church’s agenda and bring to the world’s attention are well known. Some can be encapsulated in phrases or catchwords such as, “God is Mercy,” “pastors must have the smell of the sheep,” “who am I to judge,” “clericalism is a cancer in the church,” ours is “an economy that kills,” we are experiencing “World War III piecemeal,” and the list goes on.

But this pontificate is not about slogans. There is a tremendous depth and breadth to it and its “agenda”—both within and beyond the strict confines of the Catholic Church and its internal affairs.

For example, Francis has been the world’s leading moral voice in defense of immigrants, migrants, and refugees, calling for political/social action to accept and integrate “foreigners.” He saw this as a burning issue long before the immigrant crisis embroiled Europe and other parts of the world and filled its people with fear.

He has repeated the mantra to “build bridges, not walls” (a phrase first used by John Paul II) as a way to overcome such fear of others and to resolve conflict at all levels: personal, communal, inter-ecclesial, and even international.

The pope has pricked the conscience of the wealthy and those who wield such great power in the realm of finance and at the highest level of governance, reminding them that world’s resources are meant for all people not just a few.

He has called for wealth redistribution, too, which made him sound suspiciously like a communist. But those who are attentive can see that this call is part of the pope’s more urgent and deeply evangelical concern for the health and welfare of all God’s creation, of which humans are the crowning work and responsible guardians.

Francis has reminded the entire world that our earth, our universe—what he calls “our common home”—is at risk because of the way we too often abuse, exploit, and pollute it.

But he also insists that caring for creation is more than just protecting the natural environment. It also includes protecting human life, from conception to natural death and at every stage in between.

In confronting these issues, Francis has unleashed and fortified all the resources of Holy See diplomacy in ways few popes have done before, including the socially and politically active Saint John Paul.

In regards to Catholics specifically, the Argentine pope has expressed his preference for a church that is like “a field hospital after battle,” “a poor church for the poor,” “an accident-prone church” unafraid to make mistakes, “that is bruised, hurting, and dirty because it’s been out on the streets” and a church “where there’s a place for everyone with all their problems.”

Pope Francis has also begun the process of reforming structures at the Vatican and throughout the church, even if those who are impatient see him as moving too slowly in this area. But his desire to renew and transform the levels of decision-making in the church through the principle of synodality (that is, the people and pastors walking together) and group discernment is beginning to bear fruit.

He has allowed and encouraged discussion and debate in a church that, not so many years ago, was dominated by leaders at the very highest level of the hierarchy who muzzled and marginalized anyone who did not toe the party line dictated from Rome. Instead, Francis has shown himself to be tolerant of critical and discordant voices— even those that have attacked him. He has tried to promote a “big tent” model of the church, which seeks to unite a wide range of diversity through mutual enrichment and mutual respect (charity).

Some have pointed out that this pope has not been as effective as he could be in overhauling the Roman Curia or carrying out a radical financial reform of the Vatican. Others have complained—and they are correct in some ways—that Francis has been weak, uninterested, or just too culturally limited when (among other things) it comes to advancing the role of women in the church or dealing more decisively with priests who sexually abuse minors; and, more importantly, demanding accountability of the bishops who cover up such abuse and protect abusive clerics.

All this may be true. But, as I have repeated so many times, Pope Francis is a man of deep prayer and discernment. He has shown, throughout his life, the willingness and capacity to listen, learn and change—even at the venerable age of eighty! And he is challenging the entire church—and people of all faiths or of no faith at all—to be just as willing.

In its two-millennial history, the Christian Church has developed, changed and undergone reform only slowly, even in spite of periodic disruptions or even monumental events. So four years (a mere forty-eight months) can seem “like yesterday come and gone, no more than a watch in the night”.

And yet something visibly transformative has begun to happen and something lasting is already beginning to take root in this short period of time.

“Many think that changes and reforms can take place in a short time,” Pope Francis said at the start of his pontificate.

But he urged the reform-minded to be patient by adding, “I believe that we always need time to lay the foundations for real, effective change. And this is the time of discernment.” This also has been the time for a change of mentality and new way of thinking—the bringing forth of a new ethos in the church. Francis said early on, “The first reform must be the attitude.”

And in just four years he has been remarkably successful in carrying out his attitude adjustment program. We should expect a continuation of that and more as Year Five of the pontificate unfolds.