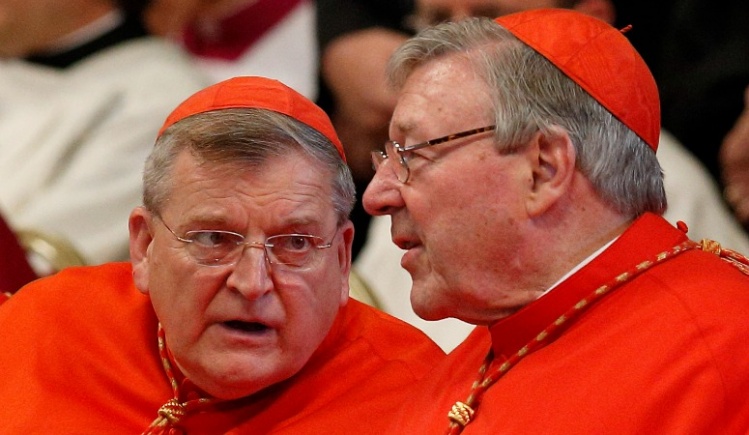 Their number has risen to five.

And there are surely many others who remain in the closet, quietly hiding their grave concerns about the direction in which history’s first Latin American pope is leading the Catholic Church.

Cardinal Paul Jozef Cordes this past week became the fifth and latest member of the illustrious group of churchmen in scarlet to publicly express doubts over the clarity and orthodoxy of Pope Francis’s recent document on marriage and the family, Amoris laetitia.

The eighty-two-year-old German retired in 2010 after having spent the last thirty of his then forty-nine years of priesthood as a Vatican official. He has now voiced support for four other “princes of the church” who last month published a letter that challenges the pope to prove his fidelity to prior Catholic teaching on five moral issues relating to marriage and sexuality.

The four authors who made the clamorous demand for clarification are by now well known.

But they are not the only Catholics to publicly express alarm at some of the points found in Amoris laetitia.

Forty-five self-described “Catholic theologians and philosophers, church historians, and pastors of souls” sent a letter last June to the dean of the College of Cardinals, Angelo Sodano, asking him to urge all his confreres to “take collective action to respond to the dangers to Catholic faith and morals posed by the apostolic exhortation.”

They included a thirteen-page document containing “theological censures” of eleven points in Amoris laetitia. The signatories believe these are “heretical” statements, while they point to another eight they see as less serious, but still scandalous and tending towards error.

Eighteen of the people that singed the June letter then joined with five others and, earlier this month, issued another text calling for clarification.

They upped the ante significantly by claiming that the papal document on marriage had not only caused “widespread confusion and disunity,” but that it had actually plunged the universal Church into “a gravely critical moment in her history that shows alarming similarities with the great Arian crisis of the fourth century.”

The mind boggles that so-called “Catholic scholars” could so grossly exaggerate.

The Arian crisis was a theological dispute over the understanding and articulation of belief in Christ’s divinity. It was indeed serious and threatened a core dogma of the Christian faith that we profess in the Nicene Creed—belief in Jesus Christ as “true God from true God, begotten, not made, consubstantial with the Father.”

But marriage and sexuality? There is not a single article in the Profession of Faith that says anything about it. That’s because those issues are not part of the central tenets of the faith, they are second- or even third-level teachings.

Pure and simple, they do not and cannot substantially alter one’s Christian faith. They are of a different category altogether.

Catholics who believe that Amoris laetitia is a serious threat to Catholic faith or its teaching on the indissolubility of marriage are actually using this issue as an excuse or an example of a much more fundamental disagreement with Pope Francis.

As I alluded to in an article published over three-and-a-half years ago (“Francis’ new world order,” The Tablet, 1 June 2013), their real concern is the pope’s radical rejection of “the mentality of the ancien regime, which still inhabits the minds of many conservative European churchmen of his generation.”

The article went on to say that, in this regard, Francis “stands in stark contrast to his immediate predecessor” who “lamented the loss of the old world order where the noble classes (bishops among them) brought stability to society and age-old protocols helped preserve an eroding Euro-Catholic ethos and culture.”

Benedict XVI, albeit with inspiring spiritual language and clever theological arguments, waged a losing battle to re-establish and firmly impose a Euro-centric model of the church built around a distinct and classic culture—of art and architecture, literature, philosophy, and political engagement.

Most conservative-leaning bishops and priests—even those who are not European—have continued this futile attempt to preserve the last vestiges of Christendom despite the indisputable fact that such an effort has been rejected by the current pontificate.

And therein lies the real reason for their opposition to Pope Francis.

They are horrified that he does not share or approve their conviction that the Catholic Church must stand obstinately and unsullied as a bulwark against a changing, secular society. Francis has, instead, called for an “accident-prone” church which is not afraid of making mistakes.

“I prefer a church which is bruised, hurting, and dirty because it has been out on the streets, rather than a church which is unhealthy from being confined and from clinging to its own security,” the pope declares in the blueprint document of his pontificate, Evangelii gaudium (the Joy of the Gospel).

“I do not want a church concerned with being at the center and which then ends by being caught up in a web of obsessions and procedures,” he continues in this 2013 text (cf. par. 49), which too many bishops continue to ignore.

“More than by fear of going astray, my hope is that we will be moved by the fear of remaining shut up within structures which give us a false sense of security, within rules which make us harsh judges, within habits which make us feel safe, while at our door people are starving and Jesus does not tire of saying to us: ‘Give them something to eat’ (Mk 6:37),” warns the pope.

Catholics who are unsettled or befuddled by Francis (I continue to submit that they are a tiny, but vocal and well-organized minority) find their identity, in large part, in the unchanging customs and laws that the church upholds, even if they do not (or cannot) follow them.

The pope is a threat to their sense of security and Catholic identity when he says, “I dream of a ‘missionary option’, that is, a missionary impulse capable of transforming everything, so that the church’s customs, ways of doing things, times and schedules, language and structures can be suitably channeled for the evangelization of today’s world rather than for her self-preservation” (EG, 27).

This is a clear call for change—something traditionalist Catholics abhor.

“Pastoral ministry in a missionary key seeks to abandon the complacent attitude that says: ‘We have always done it this way’,” says the pope.

“I invite everyone to be bold and creative in this task of rethinking the goals, structures, style and methods of evangelization in their respective communities,” he adds.

He then encourages all Catholics—especially the pastors—to “apply the guidelines found in this document generously and courageously, without inhibitions or fear” (EG 29).

The Second Vatican Council (1962-1965) attempted to bring the Catholic Church finally and fully into the post-Christendom era. It sought to break out of its centuries-old Euro-centric paradigm and inculturate the Gospel–God’s incarnate Word–in all peoples and cultures through their indigenous idioms, philosophies, sociological developments, and other local ways of expressing and understanding life and faith.

Unfortunately, the Council’s project was thwarted in the very place where its documents and “spirit” had so dramatically come to life—at the Vatican and in Rome.

Now a Jesuit from Argentina, a man who never studied or worked or even spent much time in this clerical hotbed of the church’s central bureaucracy, has begun to right this wrong.

He has refocused the entire church on the Gospel and the basic essentials of what it means to be a community of Christ’s disciples. And he’s begun dismantling all that hinders that community from offering God’s mercy and forgiveness to all people with lavish generosity.

“The church has rules or precepts which may have been quite effective in their time, but no longer have the same usefulness for directing and shaping people’s lives,” Francis says in Evangelii gaudium (par. 43).

He sees the need to modify or put aside such rules and the ancien regime in which they were once so securely anchored.

And that is what so upsets his critics.