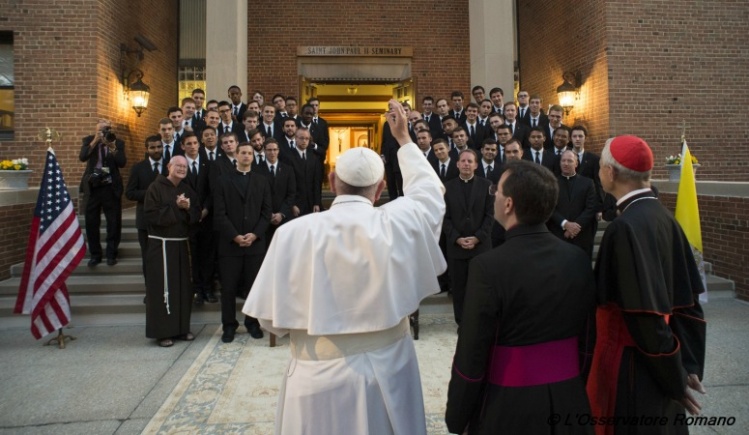 The Vatican—and Pope Francis, specifically—caused a bit of an uproar among many gay and “gay friendly” Catholics this week by strongly reaffirming a controversial 2005 directive that excludes “persons with deep-seated homosexual tendencies” from being admitted to Catholic seminaries.

The reaffirmation of the ban came near the very end of a ninety-page document that updates the Vatican’s three-decades-old set of international guidelines on priestly formation.

It is known as the Ratio Fundamentalis Istitutionis Sacerdotalis, originally drawn up in 1970 and amended only one other time, in 1985.

The Congregation for the Clergy began drafting the revised set of guidelines back in the spring of 2014. It quietly posted the finished product this week on its website without any formal Vatican announcement or fanfare.

“The Holy Father Francis has approved the present General Executive Decree and has ordered its publication,” says the text, which is dated December 8, 2016.

It bears the signatures of the congregation’s cardinal-prefect and his top three assistants, two archbishops, and a monsignor.

It should be noted that there are serious flaws in the so-called “revised” guidelines that are far more serious than the dubious ban on gay men—dubious because anyone who is not living with his or her eyes willfully shut tight knows that the percentage of homosexually-oriented men in the priesthood is far greater than those in the general population.

Yes, it’s unfortunate and unfair to single out gays when all Latin Rite priests, with only special exceptions, must follow the discipline (the Vatican insists it is actually a God-given “charism”) of living chaste celibacy.

Under the current practice, no one—whether he identifies as gay or straight—should be allowed in seminary if he “practices homosexuality,” as the document says, or heterosexuality for that matter.

But the more fundamental problem with the new set of Vatican guidelines is that, with only a few modifications, it rubberstamps an outdated and woefully inadequate model for preparing today’s priests. It is a monastic model of enclosed community life that is completely incongruent with the type of pastoral ministry in which the overwhelming majority of seminarians will be serving in the future.

“Future priests should be educated so that they do not become prey to ‘clericalism,’” the new document rightly asserts. But no matter how many times Pope Francis has railed about this “cancer” inside the church, the very seeds of clericalism are actually part and parcel of the seminary system itself.

A group of men who believe they are specially chosen by God are then sent away to spend several years separated from the rest of the baptized faithful. And there they immersed in the culture of clerics.

Sadly, the new Vatican document makes only brief mention of the “valuable” role lay people, especially women, might play within seminary formation, and only in “certain circumstances.”

So-called “specialists,” such as psychologists, are noted as making a “valuable” contribution to forming or screening candidates. But the document is clear that, in the end, they don’t make “judgments as to the suitability” of who should be ordained. That is left to the bishop on the advice of the priests who serve as seminary rector and spiritual director.

“The presence of the laity and consecrated persons in the seminary is an important point of reference in the formative journey of the candidates,” the document says.

It adds that women can also play a significant role in the seminary as teachers, specialists (as nurses? part of the cleaning and cooking staff?), and within families. But these are presented merely as possibilities, not as requirements.

Seminaries have certainly evolved since the sixteenth-century Council of Trent, which is when they were mandated to be the normal way for training future priests. And they have changed even more since Vatican II. But the seminary model is not functioning.

Will the bishops ever have the courage and creativity to admit this and forge a new way of preparing future clergy within—and not so starkly separated from—the entire body of believers, both men and women?

They may be provoked to do so if Catholic young people have anything to say about it. The Vatican is expected to start canvassing the views of the church’s younger members specifically regarding “young people, faith, and vocation discernment.” That’s the theme the Synod of Bishops will grapple with at its next big gathering in the autumn of 2018.

The Knights of Malta made the surprise announcement this week that the mandate of their grand chancellor, Albrecht Freiherr von Boeselager, has come to an abrupt end only halfway through the German nobleman’s five-year term.

No reason was given in a short news item that was posted December 8 on the Sovereign Military Hospitaller Order’s website.

The order’s prince and grand master, Matthew Festing, was just as vague in a letter (which La Croix International has seen) that was sent to the Knights’ national priors and other leading officials.

While Festing expressed “regret” that Boeselager “no longer holds the position of grand chancellor,” he added that the former official would also not have “any other position in and on behalf of the Order.”

Some saw that as a clear sign that that the sixty-seven-year-old German, a Knight of Malta since 1976 and one of its top international officers since 1989, had been pushed out.

Festing said this was “with immediate effect” and added that members would “be informed as soon as possible” of the man who would temporarily fill the extremely important post of Grand Chancellor, basically the Order’s head of foreign affairs and the interior.

Sources close to the Knights of Malta, but who wished not be identified, said it was suspected that Cardinal Raymond Burke played a role in sacking Boeselager.

The traditionalist American cardinal was removed from his key post as prefect of the Vatican’s top court in November 2014 when Pope Francis made him the cardinal-patron of the Knights—a move all agreed was a clear demotion.

It is believed that the cardinal saw the former grand chancellor, who was elected by the Order’s General Council just six months before his own appointment as patron, as too “progressive” on social issues.

The nine-hundred-year-old Order of Malta has been based in Rome since the mid-1800s. It is present in one hundred and twenty countries and has one hundred and thirty-three diplomatic missions, as well as a worldwide relief agency. It has distinguished itself through numerous hospitals, medical centers, and specialist foundations.

It is an open secret that a number of the Knights and Dames of Malta have been extremely uncomfortable with Cardinal Burke’s controversial statements and criticisms of the pope, worried by the damaging effects they could have on their order and its image.

Albrecht von Boeselager and his family are known to be close to the Jesuits, he and his father having both attended the Jesuit-run St. Aloysius College (Aloisiuskolleg), a university preparatory school near Bonn.

It might be only a coincidence, but the pope whom certain cardinals and their conservative allies continue to attack is, wouldn’t you know it, also a Jesuit.

He continued the custom of his recent predecessors and on the Solemnity of the Immaculate Conception this past Thursday he made a much-anticipated visit to the Spanish Steps area in the heart of the city’s most fashionable shopping district.

In a small square in front of the Propaganda Fide Building, he took joined thousands of Rome citizens and various organizations in taking flowers to a beloved statue of Our Lady that commemorates her being conceived without sin.

The next afternoon the governor of Vatican City State, Cardinal Giuseppe Bertello, led a festive gathering of bands and choirs to unveil the large Nativity Scene and light the towering Christmas Tree in the center of St. Peter’s Square.

Other trees have also been going up in the Eternal City these days, the most prominent of which stands in the middle of the busy Piazza Venezia, one of the busiest intersections in the heart of downtown.

Meanwhile, charity organizations have begun taking up collections in earnest to help provide Rome’s poor with food and clothing during the holidays. The Sant’Egidio Community, which has its international headquarters in the rustic neighborhood of Trastevere, will again have a big Christmas Day luncheon for the poor, elderly, and homeless.

It’s a tradition Sant’Egidio started more than thirty years ago in Rome and now has spread to more than seventy-three countries around the world where the post-Vatican II lay movement has an affiliated community.

The group says it served Christmas dinner to around 200,000 people last year. In Rome the big meal is usually hosted in the Basilica of Santa Maria in Trastevere

There’s a helpful booklet you can download from the Sant’Egidio website to learn more about celebrating Christmas with the poor.