Lead Us Not into Temptation? 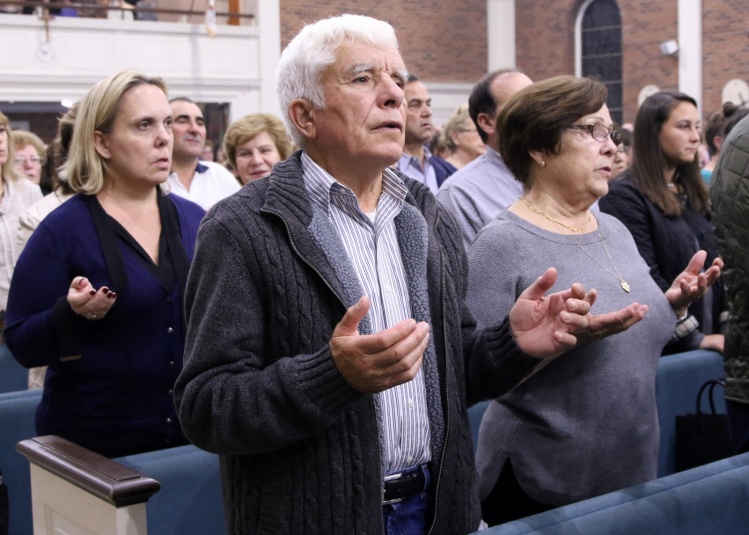 Even though it has been central to Christian devotion since Jesus’ Sermon on the Mount, the Lord’s Prayer has not remained unchanged over these past two millennia, especially as those ancient words were adapted for later believers and their novel tongues. In the history of English liturgical texts, the words of the Anglo-Saxon “Fæder ūre” have metamorphosed into the “Our Father” of today’s Roman Missal. Not merely a matter of translation, controversies surrounding the correct text of the prayer have been unavoidable since its words were set down in the New Testament, for the gospels provide two slightly different versions—one in Matthew, another in Luke.

While the English translation heard in today’s churches differs only slightly from the King James Version printed four centuries ago, a significant change may be right around the corner. Pope Francis has reignited debates about the prayer’s proper translation by suggesting that one line of the Our Father—“lead us not into temptation”—is poorly rendered and even theologically misleading. The New York Times reports:

In a new television interview, Pope Francis said the common rendering of one line in the prayer—“lead us not into temptation”—was “not a good translation” from ancient texts. “Do not let us fall into temptation,” he suggested, might be better because God does not lead people into temptation; Satan does.

“A father doesn’t do that,” the pope said. “He helps you get up right away. What induces into temptation is Satan.”

In essence, the pope said, the prayer, from the Book of Matthew, is asking God, “When Satan leads us into temptation, You please, give me a hand.”

The Times also notes that these changes have agitated certain factions of Christians who see Francis’s suggestion as an affront to tradition and orthodoxy. The textual history surrounding this prayer and its early commentators, however, might turn out to be the pope’s best ally against these critics. Some of the most important early Christian authors, including Ambrose and Augustine, show an understanding of temptation in the Our Father that aligns well with Francis’s proposed modification.

First, though, it’s worth revisiting the Greek New Testament and Jerome’s Latin Vulgate. At Matthew 6:13, the church’s authoritative translator provides et ne inducas nos in tentationem, and at Luke 11:4 he uses the almost identical et ne nos inducas in tentationem. The Latin verb inducere seems straightforward here: “to lead in” or “to carry in” or even “to drag in.” The Greek text is similarly clear. Both Matthew and Luke write καὶ μὴ εἰσενέγκῃς ἡμᾶς εἰς πειρασμόν, and the word εἰσενέγκῃς is an irregular aorist form of εἰσφέρω, which simply means “to bring in.” A 2013 Biblica article by Joseph A. Fitzmyer (“And Lead Us Not into Temptation”) similarly explains that the Greek here carries the meaning of “causing someone to enter an event or condition, as if it were a place.”

If we rely on these gospel texts and our dictionaries alone, it seems, the pope will have a tough argument to make. These ancient languages won’t easily contort themselves into “do not let us fall.”

If we rely on gospel texts and our dictionaries alone, the pope may have a tough argument to make
sharetweet

But a 1945 article by A.J.B Higgins in the Journal of Theological Studies (“‘Lead Us Not into Temptation’: Some Latin Variants”) shows us that among the earliest Christian authors, the understanding and even the text of this devotional verse underwent considerable changes. In fact, these ancient writers suggest that even if one leaves the Greek and Latin texts above unmodified, something like “do not let us fall” could be an acceptable English rendering of this compact clause.

Higgins’s article proceeds through several early patristic authors who offer alternative texts for the prayer or guidance on how to interpret the verb inducere. To begin, Higgins cites Tertullian, the earliest of the Latin Church Fathers, who in his De Oratione provides a commentary on the Our Father and explains, “lead us not into temptation, that is to say, do not allow us to be led” (ne nos inducas in temptationem, id est, ne nos patiaris induci). Fitzmyer notes that some scholars even believe this “permissive paraphrase was already pre-Tertullian,” although for Tertullian, the second phrase is not meant to be part of the original prayer but instead a clarification. Higgins finds that the later works of Cyprian, however, use that second version as though it were a “part of the actual scriptural text.” In his third-century De Dominica Oratione, Cyprian gives the following as a Gospel citation: et ne patiaris nos induci in temptationem—or in English, “and do not allow us to be led into temptation.”

These early examples from Cyprian and Tertullian, emphasizing the sinner’s slip into ruin rather than God’s agency in pushing one into it, supply the first arguments in support of Francis’s proposal. Later authors supply more. Ambrose, Higgins reports, follows Cyprian and “regards the words et ne patiaris induci nos in tentationem as part of the text of the Lord’s Prayer,” and this patristic author goes so far as to reject the more compact phrase used in Jerome’s Vulgate. In De Sacrimentis, Ambrose writes “non dicit: non inducas in tentationem,” and Higgins explains that Ambrose “evidently reject[s] the form non inducas in favor of ne patiaris induci.”

Perhaps the most compelling example from Higgins’s survey comes from Augustine, who provides evidence of variations in the Our Father among his contemporary believers and even addresses some of the hermeneutic difficulty surrounding this line. The Bishop of Hippo, himself familiar with Jerome’s ne nos inducas, observes how “many people in their prayers, however, say it this way: ‘and do not allow us to be led into temptation.’ Clearly, they are just explaining how inducas is being used” (multi autem precando ita dicunt, ne nos patiaris induci in tentationem; exponentes videlicet quomodo dictum sit, inducas).

This last example is especially pertinent as we consider what one wants to accomplish with a new translation of the original Greek and Latin texts into our contemporary vernacular. Should the English strive to mimic the simplicity of et ne nos inducas by using “and do not lead us,” in a one-to-one correspondence between the two languages? Or should an English translation, following Augustine’s account, use a phrase like “and do not allow us to be led” or Francis’s “do not let us fall,” understanding that such a phrase better captures the intended theology of inducas or εἰσενέγκῃς?

As Christians consider these literary issues, they should bear in mind the example of their ancient exegetical predecessors, those patristic authors who defined the church and its prayers in its first centuries. If Augustine, Ambrose, and Jerome couldn’t quite settle on a definitive text or single perspicuous meaning of Christianity’s central prayer, we should allow ourselves a little room for debate, too.