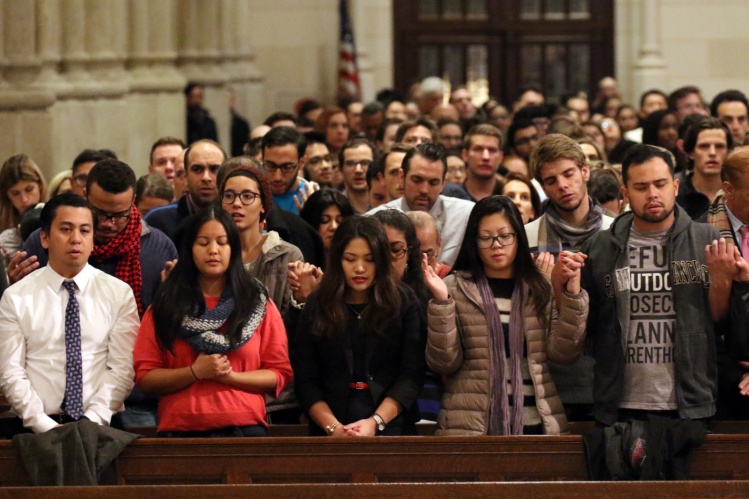 People recite the Lord’s Prayer during a Mass for young adults December 7 at St. Patrick’s Cathedral in New York. (CNS photo/Gregory A. Shemitz)

Pope Francis has voiced an objection to the Italian translation of the Lord’s Prayer. He made his case briefly in a recent interview on TV2000, the television network of the Italian bishops’ conference. Like many people, Francis finds it odd to imply that God leads people into temptation. “The one who leads you into temptation is Satan,” he says. “That’s Satan’s office.”

Major news organizations have run exaggerated headlines. They are wrong to report that the pope has called for the familiar form of the ancient Christian prayer to be “updated” or reworded, although he does seem poised to do so. A new translation of the Notre Père, the Lord’s Prayer in French, went into effect in the Catholic Church on December 3, and in the interview Pope Francis expressed his approval. The French translation represents a movement away from what he says the Italian translation gets wrong. His idea of how the Lord’s Prayer should read in Italian approximates the revised French translation and even more closely the Spanish translation used in Catholic liturgy: No nos dejes caer en la tentación (“Do not let us fall into temptation”). In criticizing the Italian translation, Francis speaks cogently in theological terms of sin and free will but is silent on the need for translations of the Lord’s Prayer to hew as closely as possible to the biblical Greek.

The gist of his critique of the Italian translation applies to the English translation as well and betrays what in my view is a common misapprehension, which the French revision reflects and reinforces. At the heart of the controversy is the noun “temptation” (tentazione in Italian, tentación in Spanish, tentation in French). Its meaning has shifted over the centuries. We tend to lose sight of what it means literally, stripped of its theological associations with naughtiness, bad thoughts, and sin.

“Temptation” is cognate with “attempt.” Call it “a trying.” Better yet, “a trial”—as in “Paul suffered many trials on his way to Rome.” The mission that God called him to was marked by beatings, shipwreck, hunger, exposure to the elements. He could have backed out, but he persisted, faithful to his vocation to the end. It was hard. Note, too, that God “tempted” Abraham: that’s the verb in the King James Version where he commands Abraham to sacrifice his son Isaac (Gen. 22:1). The only way to make sense of the word in that context is to assume a shade of meaning that doesn’t quite match what Francis means when he says that it’s not God who “pitches me into temptation, to see how I fall. No, a father doesn’t do this.”

In the Septuagint, the Greek verb for what God does to Abraham is ἐπείραζεν. Its root is the same as that of πειρασμός, the Greek noun that occurs in the Lord’s Prayer and gets translated as “temptation” and its cognates in modern languages. God’s trial (“temptation”) of Abraham was the situation in which that man of faith would make manifest the magnitude of his fidelity to the Lord’s will. It could not have been easy for Abraham to accept and obey.

Through his gift of the Lord’s Prayer, Jesus gives us permission—no, he instructs us —to ask God to spare us from such demanding assignments. In her book The Face of Water, Sarah Ruden suggests that “torture” is “more or less” what Jesus’ contemporaries would have understood by πειρασμός. The word is related to the English “peril” and to the Latin periculum, meaning “danger.” The semantic sweep of the Indo-European root per or peir includes the concepts of experience and experiment. To try and be tried, prove and be proved, imperil and be imperiled—these define the contours of πειρασμός, the “temptation” that we ask God not to lead us into.

Let’s not try to be more spiritual than Jesus himself at prayer in Gethsemane.
sharetweet

My advice to translators who share the pope’s concern is to stop fiddling with the verb, “lead into,” and concentrate instead on the noun, “temptation.” Change it in the English translation to “trial,” or perhaps “peril.” Make the equivalent adjustment for translations in other languages. This would address Francis’s concern to avoid theological error and at the same time reduce the distance between the original text and the understanding of it that twenty-first-century Catholics would acquire from official translations.

We tend to over-spiritualize the meaning of “Lead us not into temptation” and to jump ahead too many steps in our understanding of it. In his explanation of why he thinks the Italian translation is misleading, Francis speaks of temptation as something we “fall into,” as in the Spanish translation. In the Greek of Matthew 6:13, Jesus says nothing about falling. The verb is εἰσενέγκῃς, a form of εἰσφέρω, meaning “carry into.” So “lead us not into temptation” is a fair-enough translation. “Bring us not into temptation” might be better. But “Prevent us from falling”? In Christianese, what we fall into is sin. Let’s not create an invitation to confuse that with temptation, which is a situation into which we’re sent or thrown, if not directly by God than at least with his assent, as in the case of Job.

From temptation, we can fall into sin, though we can also stand upright and prevail, like Abraham, Daniel, and Paul. The situation is fraught with danger but also opportunity. To see it only as the prelude to sin is like describing tomorrow’s game as a risk that our team will fall to its opponent and lose. In any case, the “temptation” that we ask the Father to keep at bay is a stress on us first of all in the here and now. It’s a this-worldly hardship. Let’s not try to be more spiritual than Jesus himself at prayer in Gethsemane. Pray for the virtue of the martyrs of Compiègne should a decision like the one they had to make confront you. First, pray that it doesn’t confront you.

“Let this cup pass from me.” In effect, what Jesus says by teaching us to pray “Lead us not into the trial” is “Your trepidation about entering into the lions’ den, into the agreement to sacrifice your beloved son, or what have you—understood. On the eve of my own ordeal, I express my desire to be spared, and I address it to the Father. Do likewise.”

[See Charles McNamara’s take, which points to the historical debate over the prayer’s translation, here.]