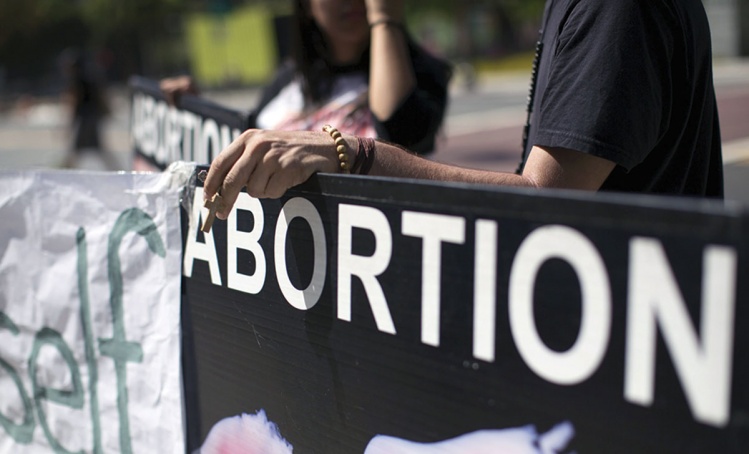 I wasn’t challenged by any one person to do it. No one said, “If you are a good Catholic, you would volunteer your rosary and one hour of your time to this very worthy cause.” And yet that thought had crossed my mind. I could always revisit the idea at some later date, so I put it aside. But one day after Mass, my devout husband told me that he wanted to sign up for an hour of silent protest outside of the abortion center. I understood, of course.

As I was waiting for him at the sign-up table, a woman with kind eyes spoke to me. She asked if I, too, would like to volunteer my time to pray for the unborn. I asked if it was a hostile protest; she said no. I asked if there would be people protesting our protests; she said it wasn’t likely. I knew I’d have no problem standing for an hour. I knew I could get through four rosaries in an hour. So I did it—I signed up for an hour, alone.

My husband asked me if I was ready for this. I told him I wouldn’t have volunteered if I weren’t. I admitted to being a bit apprehensive, but I’d brave it out. Still, he worried about me, and told me he would happily take my hour so that I wouldn’t have to do it. He suggested that I sign up instead for a “group time” instead of going by myself during the early evening. Even the coordinator who scheduled the protests agreed it would be better for me to be with a group, at least the first time. Still, I insisted I could do it alone. Part of me wavered. It would have been easy enough to agree with my husband and the coordinator, or to postpone. But I couldn’t do that. My mother goes to viewings, wakes, cemeteries, prisons, and hospitals to pray rosaries for whoever requests them. My maternal grandfather built a Catholic church and a cavalry on his farm—by hand. I come from a long line of people who don’t sit things out.

So, thirty minutes before I was due at the abortion clinic, I got off my couch, grabbed my rosary and left. I knew where I was going, even before I saw the place. I’d gone to Google Earth to look at the area where I would stand and pray my rosary. I even picked out a spot where I could park for that hour. After arriving, I slowly approached the stretch of sidewalk where I would keep my solitary one-hour vigil. Then I began to pray, whispering Hail Marys and Our Fathers.

While praying, I reflected on my past. Through both research and experience, I knew that Planned Parenthood offices aren’t out there just to end the lives of the unborn. They are there to counsel women who are in a scary spot. They are there to provide birth control as well as treating individuals with STDs. I knew that, in their own minds at least, the girls and women entering the clinic were not doing any evil; they were frightened, and perhaps desperate.

I know these things, because many years ago, I visited an abortion center. Twice. I didn’t go there to accompany someone. I had two abortions. I was eighteen and involved with a bad man whom I could not say no to. I didn’t yet know that abuse is not always delivered by punches, kicks, and slaps. All I knew was that my relationship with him was devouring my soul, and I had to end it. I terminated my first pregnancy, and that should have been lesson enough. But it wasn’t. I stayed with the bad man and got pregnant again. He blamed that one on me. After my second abortion, I got away from him, but the damage was done. The guilt and horror of what I’d done turned part of my soul black; I’d carry that forever.

Standing outside the abortion clinic, I prayed for specific things. I prayed for the souls of the babies whose lives were ended. I prayed for the women who had the abortions. I prayed for women in relationships that cost them their happiness, safety, and their sense of self. I prayed for myself, too. I did not have to pray alone—not for too long. The lovely young woman who had helped me sign up for the hour’s vigil showed up to keep me company. It was great to have someone to talk to. I didn’t tell her what I’d done, but I did tell her what I know. I know there is no malice in the people who go to abortion centers; there is fear, heartbreak, loneliness, and guilt. Sometime later, a homeless man joined us and we all prayed together.

I know that women seeking an abortion don’t need me to hold a sign saying that they are doing evil things. But maybe if they see me praying, they’ll pray themselves. Maybe some of them will think about the Blessed Virgin Mary and how hard her unplanned pregnancy was. Maybe they’ll think of her son and see him in their own unborn children. I can’t undo what I did, but I can at least share my story, and stand for an hour, and pray, for whoever needs my prayers. So that is what I will continue to do.

Cyndia Rios-Myers is a freelance writer in San Diego, California.