The Latest Film from Paolo Sorrentino
By Richard Alleva
Movies 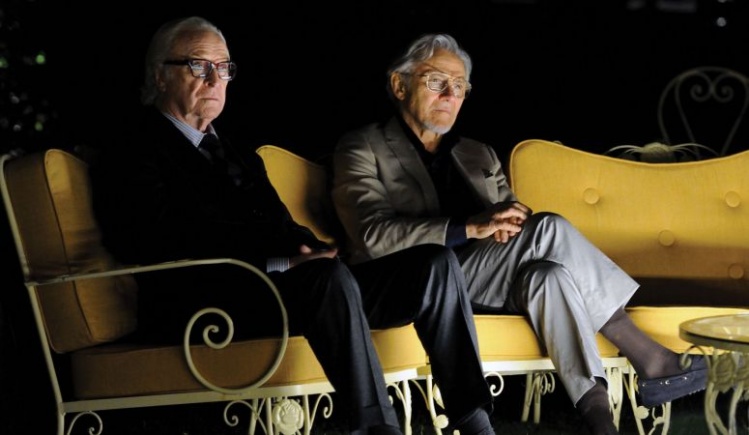 Paolo Sorrentino chose a deceptive title for his latest film, Youth. Here the word doesn’t refer to a fixed stage in life but to the mysterious inner spark—as much spiritual as biological—that keeps us going. (Henri Bergson and Bernard Shaw called this “the life force.”) Nor does Youth offer a cinematic version of the old adage “You’re only as old as you feel.” Instead, it shows how the strong can suddenly collapse, while the seemingly superannuated can renew themselves. Buffeted by chance, emotion, economics, and a hundred other forces, the life force can be pretty fickle.

At a Swiss hotel-spa we find a couple of septuagenarians, Fred Ballinger (Michael Caine) and Mick Boyle (Harvey Keitel). The two are longtime friends and Fred’s daughter Lena is married to Mick’s son. Fred is a world-renowned composer-conductor, now retired, while Mick, a tough-guy Hollywood director, may be facing forced retirement because his last few movies have bombed. Mick is determined to make a final masterpiece—“my testament”—and expects to secure financing for the film once he has signed up his long-term leading lady as a box-office guarantee. By contrast, Fred is determined never to make music again, and even turns down Queen Elizabeth’s request that he perform his most popular work, “Simple Songs,” as a birthday present for Prince Philip. In a movie that constantly threatens to break down into a series of stand-alone, gorgeously photographed vignettes, two questions provide narrative spine and sufficient suspense: Will Mick get to make his movie? And what is it in Fred’s past that prompted him to shun the spotlight?

Youth is populated mostly by codgers and kids; the middle-aged are almost entirely banished. (Exceptions: the spa’s doctor and the queen’s envoy, the latter an amusing turn by actor Alex Macqueen.) Aside from Caine and Keitel, there is the aging actress Mick wants to cast as his leading lady, played by Jane Fonda wearing make-up so garish that it’s turned her into a geriatric Medusa. (The Fonda we’ve seen in recent TV series is aging beautifully. What a mortification of vanity Sorrentino has asked of her!) And the spa includes an endless parade of the wrinkled, the bent, and the wheelchair-bound. As if in counterpoint, we are also presented with a squad of twenty- and thirty-somethings: Fred’s Lena (Rachel Weisz), Jimmy, a superstar movie actor (Paul Dano), Mick’s staff of neophyte scriptwriters, a Miss Universe, a teen-aged masseuse, a boy violinist, a pre-pubescent girl, a British rock star named Paloma Faith (played by a British rock star named Paloma Faith).

This is a cunning strategy on Sorrentino’s part. The middle-aged are too busy—with work, sex, and their social lives—to bother with any contemplation of their life force. But the young, still on the cusp of everything, can exult in their budding strength, or feel queasy about it, or simply question where it is taking them. That may be why the young appear to older eyes to be both verdant and gauche. The fledgling scriptwriters amuse and exasperate the veteran Mick with their abundant but often silly ideas, their squabbling, and the awe in which they hold him. Jimmy, the movie star who has won world fame with a trashy superhero movie, aspires to the calm wisdom he sees in Fred, but is supercilious to other young people because he despises the blockbuster that catered to them but wasted his acting talent. And when Lena is abandoned by her callous husband, she feels she is turning into a facsimile of her mother, who was abandoned years ago by Fred. Still, the very fact that all these young people are temporarily stymied emphasizes, rather than obscures, their potentiality, their latent life force, their youth.

Does that mean our two septuagenarian heroes spotlight the life force by having lost it (willingly, in Fred’s case; unwillingly, in Mick’s)? So it would seem for much of the movie. But finally Sorrentino pushes past this rather obvious schema to make a more subtle point about what keeps youth alive and what may paralyze it.

When Mick’s project suffers a financial setback, at first he refuses to give up. But then he does something psychologically disastrous to himself. In a scene that evokes the climax of Fellini’s 8 1/2, Mick envisions all the actresses of his past hits performing their roles in full costume and make-up. These phantoms bring a rush of nostalgic joy to the director, but the nostalgia undoes him. After this complete vision of his past work, he can no longer imagine adding to it. It already seems to belong to the past. (Igor Stravinsky is often referred to in this movie. That genius, confronted at the age of eighty with a copy of the score of his Rite of Spring, said that he was bored by it, that he was interested only in his current work. Stravinsky lived to be eighty-nine and, until illness brought him down, never lost his youth.)

Fred’s fate is the opposite of Mick’s. He’s done his best to put his career behind him, but he can’t quite suppress his instincts. In a pasture near the hotel he mentally rearranges the sounds of cowbells to create a music only he can hear. From time to time he idly rattles a candy wrapper to articulate a rhythm. Finally, when catastrophe strikes a loved one, Fred mounts the podium again to conduct a tribute concert. Grief, not ambition, motivates this encore performance, but it is enough to revive, however temporarily, his life force.

IN HIS PREVIOUS films, Il Divo and The Great Beauty, Sorrentino often set his scenes in the luxuriant interiors of outrageously expensive houses or palaces, and his superb cameraman, Luca Bigazzi, luridly enhanced the color of fabrics and textiles, and shed a bronze glow on flesh. The effect was theatrical and sinister, as befitted these stories of corrupt politicians and decadent millionaires flaunting their privileges. Youth (also shot by Bigazzi) has a visual kinship with these films, but the photography is toned down because the main characters here aren’t corrupt but simply troubled and struggling to do the right thing. The surfaces of the hotel-spa are restful rather than dazzling. (Some of the interior scenes were shot in the Hotel Schatzalp in Flims, Switzerland, the model for the sanitarium in Thomas Mann’s Magic Mountain.) That many of the guests are youthful and healthy serves as a charming taunt to the oldsters, as when Miss Universe lowers her gorgeous nude body into the swimming pool where our two protagonists float, eyes wide and mouths agape. Fred: “Who is she?” Mick: “God.” That sort of pithiness amazed me, since Sorrentino is listed as the only writer in the credits. How did he become so at ease with English? (Michelangelo Antonioni employed a battery of American writers on his American debut, Zabriskie Point, and the result was dialogue for the mouths of robots.)

Of course it helps that the talk is delivered by fine actors. Keitel and Dano both rely on familiar mannerisms and inflections that fit nicely with their roles. The latter’s specialty, passive aggression, here comes across as Jimmy Tree’s effort to attain Buddhistic calm. Keitel’s alpha-male cockiness, meanwhile, becomes moving as we discover that it’s really a kind of defensiveness.

But Caine and Weisz break new ground. Weisz, always a charmer but capable of darker emotions, doesn’t present her character’s conflicting feelings of love and resentment in alternation; she delivers them tangled together. Caine, master of cool calculation and Cockney wit, has sometimes been challenged by the straight-on expression of plangent emotion. Not here. His Fred Ballinger is a kind of palimpsest. Before us is the old man with all his regret and compassion, but we can still make out traces of the younger Fred, whose egotism and intransigence caused his family such pain. When the conductor feels forced to explain to the Queen’s envoy just why he can’t perform his “Simple Songs” anymore, Caine cracks open Ballinger’s shell with a rush of self-hatred and thwarted love. The fusion of actor and character is complete and produces the best kind of discomfort in the viewer—the kind Auden produced with his instruction to “love your crooked neighbor with your crooked heart.”

Youth has been nominated for only one Oscar (best original song). This doesn’t surprise me. A few of the most nominated films are solidly made and beautifully acted, particularly Spotlight, Room, and Carol. But most of them yield up their virtues at first viewing. Not so Youth. I’ve seen it twice and still feel I haven’t gotten to its core and probably never will. A movie like this isn’t immediately comprehended and therefore can’t be immediately rewarded. But because of its depth and vitality, Youth will have a long shelf life.