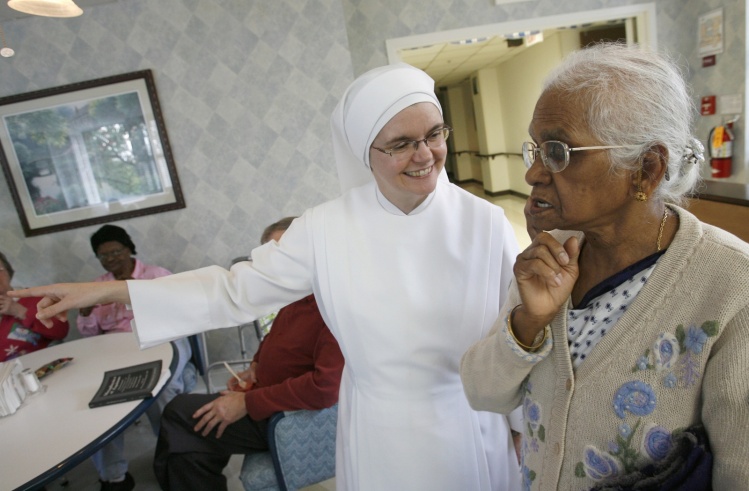 Last fall, I toured high schools with my fourteen-year-old, whose current gig ends after eighth grade. At two quite different schools, one public and one private, we heard about the school-sponsored theme nights that enliven football or basketball games. “We had ‘Senior Night,’” the tour guide at the private school told us, “and all the members of the senior class came with walkers and canes, bent over like this” (she demonstrated, giggling) “with their socks covering their trouser cuffs—it was hilarious!” We heard a similar account at the public school.

I get the joke: the contrast between the fresh-faced high-school seniors and the octogenarians they emulate, the incongruity of teenagers robed in the clothes of the elderly, the playful adolescent humor of it all. And perhaps it should not be surprising that in a culture where pretty much every segment of society is fair game for taunting and mocking, “senior citizens” would be ridiculed by their grandchildren’s generation. But it still saddens me. For as Alison Gopnik observed in a column in the Wall Street Journal on the challenges of aging, “It’s hard to avoid feeling that there is something deeply and particularly wrong about the way we treat old age in American culture right now.”

When my children were younger, they accompanied me every Sunday to take Communion to a group of older people in an assisted-living residence near our church in Connecticut. We visited with Camille, who always cried, and with Frances, almost one hundred years old, who dispensed lavish handfuls of candy from her larder (thus becoming a particular favorite of my kids). There was Rudy, a veteran of World War II, usually a bit grim-faced, but grateful for our knock on the door nonetheless. He took a particular shine to my youngest child and once gave him a huge stuffed dog from a carnival that was twice as big as he was. We called him Spike and he took up residence in our basement playroom until one day when a seam ripped and reams of bead stuffing spilled out onto the carpet. There was the other Frances, who organized everyone for Communion, and Marie, and Florence, and Mildred, gentle soul and avid reader, who loved to tell us about her latest large-print find from the library’s bookmobile.

Yes, many of the residents of The Mews used walkers, or suffered from incontinence, or didn’t hear as well as they used to. But as the years went by, each one of them became a friend, lighting up when they saw my children walk through the door, eager to share a moment of conversation or a memory, grateful for the gift of the Eucharist as I pressed the thin wafer into their hands. We have moved away, now, but I think of them often, particularly every Sunday morning. And it is on their behalf that I bristle a bit when I see schools condoning a theme night that is premised upon making fun of an entire class of people, the elderly.

Every life is a “strange eventful history,” to quote Jaques’ famous speech in Shakespeare’s As You Like It. Over the course of a lifetime, each human person constructs a chain of identities, a concatenation of his or her experiences and relationships in love, work, and play. When we take these precious and unique individuals and lump them all into a category based on only one aspect of their identity, in this case their age, we do them a real injustice. This is true, of course, of any such reductive view of the human person, whether the reduction is taken according to gender, or disability, or sexuality, or color.

People aren’t one thing; they are many. That white-haired woman who is a little unsteady on her feet now—maybe she used to love to bake, and spent decades working for a law firm, and cared for her sister until her death. The grizzled old man in the chair by the window? Perhaps he worked as a pharmacist, stayed with a difficult wife for fifty years, had an amazing garden and sixteen grandchildren who adored him. Whatever their strange eventful histories, they are not just “old people.”

In his poem After Long Silence, W. B. Yeats wrote, “Bodily decrepitude is wisdom.” Instead of looking at older persons and seeing the stooped shoulders, the halting gait, and the white socks, perhaps we can instead pay attention to what they have still to give: the special wisdom that radiates through and from the wrinkled countenances, and the fullness of personhood that accompanies the accumulation of years.

Calling Cards of the Dead