St. Mary of the Annunciation
By Elizabeth Kirkland Cahill 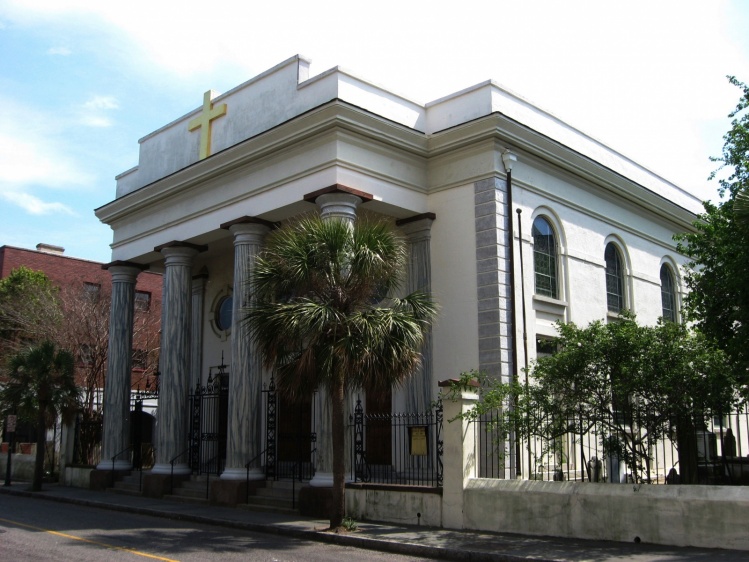 St. Mary of the Annunciation (zug55)

Churches in the hot muggy Southern coastal city where I live tend to become somnolent with summer’s heat and humidity. Those residents who can do so generally escape to the mountains. The tourist hordes that God has seen fit to visit on my stately city pretty much stick to the beaches or their hotel rooms, at least on Sunday mornings. Parish life slows to a crawl.'

Not so this summer. For the first time in eleven years, our parish church, which was the first Catholic church in the Carolinas and Georgia, has been assigned its own pastor. Well, half a pastor: our new man is also presiding as pastor and building a brand-new church in another, growing part of the city, so he will be with us part-time. A parochial vicar has also been appointed, a familiar face who leads a small congregation under the auspices of the Personal Ordinariate of the Chair of St. Peter, which is the quasi-diocesan structure created by Pope Benedict in 2012 for Anglican communities that seek a home in the Catholic Church. They are talented and dedicated priests, both of them, and the consensus among the parishioners I have spoken with is that after years of having a parish administrator whose tenure was characterized principally by the disinterest implied in the title, we have won the lottery.

So whatever the opposite of the doldrums may be—elation? excitement? glee?—such was the mood of the Mass I attended on July 9.  There was a joyful energy in the church, keeping time with the hum of the necessary (and inadequate) air conditioning. As my husband and the two of our four children who were at home that weekend settled into our usual pew (third from the front, left side of the center aisle), I looked around, and it seemed as if my fellow parishioners’ smiles were a bit brighter than usual. Life in this place was about to change, and for the better.

In the twenty-two years since I converted to Catholicism (I grew up an Episcopalian), I have experienced the Mass in a variety of settings, from the pomp and circumstance of a Jesuit priest’s funeral at St. Ignatius Loyola in Manhattan to the stark simplicity of the liturgy in a Trappist monastery. I recall one of my Episcopal priest-mentors once telling me, when I complained that I missed the beautiful language and music of the Anglican liturgical tradition (is there a greater linguistic expression of liturgical worship than the Book of Common Prayer?), “Well, we Episcopalians may have cornered the language, but the Catholic Church really knows how to do the Mass.” I have found this statement to be largely true. But I will note also that in my experience of parish liturgies in particular, there seems to be a chronic tension between the streamlined efficiency of a well-said Mass and the claims of reverence and sacredness, which call for time and attentiveness.

Architecturally, our church points us toward the latter, enshrining ideals of beauty, order, and balance. Nearly a hundred and eighty years old, it is a Greek revival building, its cornerstone laid in 1838 when the church was rebuilt after a terrible city-wide fire. It is open and balanced inside, lots of white marble, a graceful balcony, stained glass windows made in the famous Mayer Glassworks of Munich. Of the many paintings that grace the church—and they include a curious portrait of St. Peter with six toes on his right foot—my favorites are the two trumpeting angels that flank the main altar painting of the Crucifixion (originally painted in 1814 by John S. Cogdell, and restored by the painter after the 1838 fire). Each robed angel, standing on a little cloud, holds up a curved brass instrument and turns toward the crucified Christ—a reminder to me each week that our work as Christians is to trumpet the good news and give glory to God, not to seek to be the central event ourselves.

Perhaps it is the beauty of the church, or just Southern traditions of respect, but our parishioners tend to dress for Mass. Many of the men wear coats and ties, the women dresses or dress slacks. The children, too, have clearly been given a good helping of spit and polish. Everyone looks, well, nice. The out-of-town visitors who join us for Mass each week—and for most of the year they are many, as our church is smack in the middle of the heavily touristed historic district—model a more informal sartorial ethic. No matter, we welcome them to the table of the Lord and to the abundant spread at the coffee hour afterward, known informally in the parish as the “collation.”

Perhaps it is the beauty of the church, or just Southern traditions of respect, but our parishioners tend to dress for Mass.
sharetweet

Our Altar Guild is talented, faithfully creating little islands of loveliness against the white altar. On this particular Sunday the flowers seemed to catch the contagion of joy spreading throughout the church: bright-yellow lilies, deep-pink roses, strategically placed white mums, pink snapdragons, and a profusion of greenery.

The music was, as it usually is, traditional and elegant. We sang “Praise, My Soul, the King of Heaven” and “Come Down, O Love Divine” at the processional and recessional respectively (and here I must note approvingly that in this church, everyone stays through the singing of the final hymn, unlike my parish in suburban Connecticut where the pews emptied rapidly the minute the priest’s foot hit the vestibule). The choir leads us in chanting the Kyrie and Gloria in Latin from the Missa de Angelis; the Communion chant is also in Latin. This week’s Communion motet was Mozart’s Ave Verum Corpus; another week it might be Palestrina’s Sicut Cervus or Orlando di Lasso’s Exaltabo te. Ours is not a Marty Haugen church. Such a traditional musical canon may not be for everyone; in this setting, in this city, it is most right and just. But to be clear: we are not striving to be a concert hall—the lovely harmonies of Byrd or Tallis are given contemporary texture by the squawks and squeals of the many young children whose families keep our historic parish fresh and young.

The choir is usually decimated during the summer, but this particular Sunday they were fortified with some former members who had heard the good news of our rebirth and were returning to the loft. The singers sounded as good as I had ever heard them; they, too, seemed infused with optimism and energy. Hassler’s Cantate Domino, the Offertory motet, had it right: “Sing to the Lord a new song and praise his name, for he has done marvelous things. Make music to the Lord with the harp and the sound of singing.”

The quality of the spoken word varies. On this particular morning, the lector was reading the lessons a shade too fast, and (perhaps as a result) scrambled the text a bit. On the other hand, our parochial vicar effortlessly mastered the needlessly complex subordinate clauses that characterize the opening, offertory, and final prayers of the current missal translation—those sinuous clauses that trip up many priests whose first language is not English (or Latin!). The homily, a reflection on Matthew 11:25–30, was articulate, humorous, theologically sound, and relevant—no surprise with this particular priest, who has been with us many times before. Musing on the recent Independence Day celebrations he had observed with his wife and two young children (as a priest who was married with children at the time of his entry into the church, he is that rara avis in the Catholic Church, the officially sanctioned noncelibate priest), he reflected ruefully on the cultural mandate toward self-determination, suggesting that personal autonomy is tantamount to our new national religion (with Frank Sinatra’s “I Did It My Way” as the national anthem). He quoted from Justice Anthony Kennedy’s opinion in Planned Parenthood vs. Casey:  “At the heart of liberty is the right to define one’s own concept of existence, of meaning, of the universe, and of the mystery of human life.” He skillfully drew a contrast between that spurious call to autonomous self-definition and the Gospel lesson in which Jesus urges his followers to take his yoke upon them. The purpose and construction of a yoke was described in accessible terms. And he reminded us of the paradox of faith: that we find true freedom by binding ourselves to Christ. Our vicar thinks deeply, communicates effectively, and teaches well.

Many years ago, I was drawn toward Catholicism by a yearning that I could neither name nor satisfy. At its best, the Mass creates a space and a moment in which that yearning can fleetingly, mysteriously be satisfied by the liturgies of Word and Flesh, enriched by the sensory experiences of architecture, decoration, music, and all the other physical aspects of our communal worship. We are not a perfect people and our Mass this particular week was not flawless. But there is goodwill and hope in this little parish, and a sense that the Holy Spirit continues to make a dwelling in our midst, a dwelling carved out by love and faith.