How Should We Announce the Gospel?
By Emily Holman
U.S. Catholicism
Ecumenism
Ethics
Muslim-Christian Relations
Theology
War and Peace 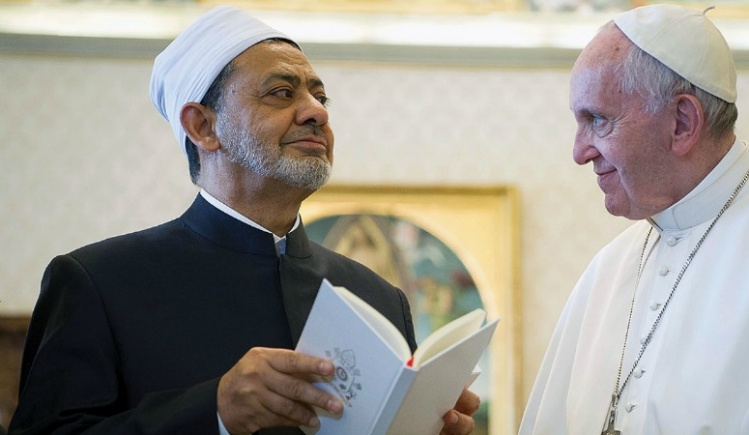 Each week at the end of Mass, we are told to go and announce the Gospel and to exemplify it with our lives. I always love this moment. It is a powerful way of being sent back out into the world, one that marks out the church as a “different” space, where again and again we are readied for good living in our communities.

But how exactly should we announce the Gospel? We all know the good news—Christ exists, we are saved—yet this message alone does not make Christianity, and by itself will do little to communicate the reality of Christian spirituality to non-Christians. Much more is needed, specifically a mode of testifying with one’s life—what Timothy Radcliffe, OP, calls “becoming a moral agent whose life is discovered to have a shape and meaning,” or what Marilynne Robinson, in Gilead, simply calls “human beauty.”

I was reminded of this very personal challenge at Mass recently. The sermon was on conversion, and the deacon delivering it drew attention to al-Qaeda and ISIS, by way of asserting that Muslims are mistaken in their beliefs and that Catholics should pray for their conversion. Though I don’t doubt the deacon’s intentions or good will, I find the argument that “Islam is fundamentally flawed because ISIS exists” to be illogical, or worse. Are there conversations to be had about the links between Islamic teaching and various offshoots or practices? Surely. But such conversations need to take careful account of complexity—and to include people from a multiplicity of backgrounds and perspectives, not least scholars of Islamic teaching. A brief sermon in a Catholic church is no place to raise the question of ISIS and Islam.

The sermon was troubling because of its language of “them” and “us.” Casting Muslims as “other,” it seemed to preclude the possibility of receptive dialogue. It put Catholics in the role of superiors empowered to pray for the conversion of Muslims. Yet, for my part, I feel I have no right to seek the conversion of others, particularly those with their own life-giving, God-giving faith. It’s not that evangelization is never a beautiful thing. Far from it: many of us are converts, and cherish the gift of conversion. Yet the straightforward language of conversion, especially spoken from a position of complacency, can be obstructive; and if we begin with conversion as our objective, we often close off the possibility of learning from interreligious encounter.

What I do view as a powerful, joyful, and humbling possibility, however, is the prospect of convincing others with the testimony of one’s own life. This action is related to conversion, since convincing someone of the value of one’s faith might guide them toward it. But it involves what the language of conversion can easily preclude: openness to learning, the desire to see how one’s own relationship with God might be lived more fully through encounter with another faith. And it might better reflect the imperative of those closing words at Mass, asking us to “Go and announce the Gospel of the Lord.”

Testifying to the meaning of one’s faith through the way one lives can be an effective method of persuasion. I, for one, have learnt from witnessing the deep wells of faith in others who never spoke of conversion. I am reminded of a friend of mine in Lebanon, who is Greek Orthodox yet speaks movingly about how powerful she finds Catholic Mass and the beauty of the Catholic liturgy. My friend has a genuine delicacy in discussing different beliefs and different faiths that I find heartening and inspiring. Giving a talk last year at an international symposium titled “Religions Together for Humanitarian Action,” she described how the Lebanese Association of the Order of Malta, where she works, advocates interreligious communities, practices, and charitable works. In Tyre, she explained, thanks to the order’s relationship with the Shiite community, you can see veiled Shiite nurses wearing the cross of the order. The order also works with Dar Al Fatwa, the highest Sunni authority in Lebanon, and is even in charge of providing nutritional advice during Ramadan. My friend tells of the symbolic power, collaborative energy, and witness to God that she sees in watching Muslims and Christians work together.

I admire her perspective, and the way she allows space in her language for openness and learning. Deeply Christian, she has no desire to impose her religion on others, but only to work together to make her country better. Her practice—so open and humble—stays with me. It testifies more, I think, to the beauty and gift of Christianity than does a practice that emphasises superiority. Now, in the attempt to attest to my faith in a similar way, I hope I might convince others of something of value.

Being told that God exists is not enough; we want to see and feel—and live—the difference that God makes. Convincing, not converting: Might we not be better encouraged to pray that our own lives exemplify the joy of faith?