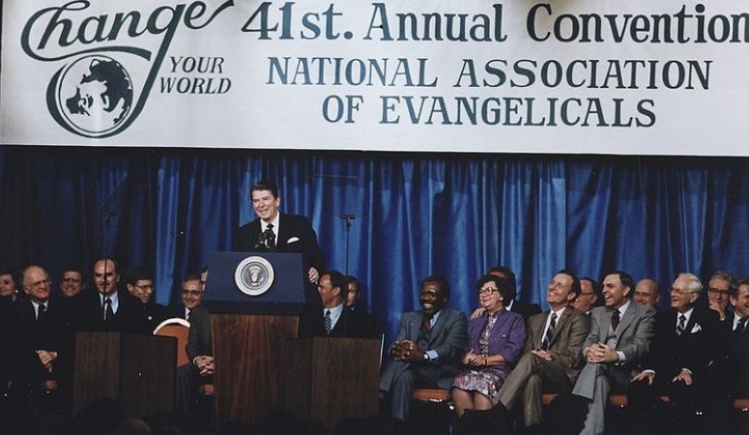 In American politics, where has God gone?

Of course this is an inadequate way of posing the question. God is always present for believers, even if the political workings of the divine can be hard to discern. And religious people continue to occupy points all along the spectrum. Just ask Hillary Clinton about her Methodism.

But especially among Republicans, religious issues have taken a back seat in the party’s discourse and religious leaders are playing a diminished role in the 2016 campaign.

This was not how things started. Many had the remarkable experience during the primaries of hearing Ted Cruz declare to his followers: “Awaken the body of Christ that we might pull back from the abyss.” You can’t get much more religious than that.

But Cruz failed to awaken and unite religious conservatives, a reason why Donald Trump is the presumptive nominee. The split this year among conservative evangelicals was profound.

On the one side were those, mainly Cruz supporters, still voting on abortion, gay marriage, and other moral issues. On the other were those among the faithful so angry about the direction of the country and what they saw as the marginalization of conservative Christianity in public life that they opted for the strongman who could push back hard against their enemies.

Robert Jeffress, the senior pastor of the First Baptist Church in Dallas, spoke for the second group. “Most Americans know we are in a mess,” Jeffress declared, “and as they look at Donald Trump, they believe he is the one leader who can reverse the downward death spiral of this nation we love so dearly.”

Jeffress reflects a profound pessimism among conservative Christians that contrasts sharply with the movement’s hopeful spirit in its Reagan Era heyday.

The current gloom grows out of an implicit awareness of the reality shrewdly captured in the forthcoming book, The End of White Christian America, by my friend and colleague Robert Jones. Although conservative Christianity will remain important, the sheer force of demography means it will never again enjoy the public influence it once had.

And in imagining that Trump will somehow reverse the trend, Christian conservatives are taking a big risk. As he has on so much else, Trump has been entirely opportunistic in his approach to religion. By some measures, he’s running the most secular Republican campaign since the 1970s.

In the early primaries, particularly in Iowa and the South, Trump tried hard to identify with a constituency he knew would be key to his success. “I love the evangelicals,” Trump said. “Why do they love me? You’ll have to ask them—but they do.”

His efforts were often awkward. He mangled references to the Bible, referred to communion as “my little cracker,” and once momentarily mistook the communion plate when it came around for the donation plate. But none of this seemed to matter.

He also was farsighted. Long ago, he put some money where his political needs would be. As Betsy Woodruff reported last year for The Daily Beast, The Donald J. Trump Foundation contributed $100,000 in 2012 to the Billy Graham Evangelistic Association, and in 2013 gave $10,000 each to The Family Leader, an influential Iowa evangelical group, and to Samaritan’s Purse.

Franklin Graham, Billy Graham’s son, said nice things about Trump early on. But he took Trump to task in April when the candidate distanced himself from North Carolina’s law barring transgender people from using bathrooms that corresponded to their gender identity. Characteristically, Trump quickly walked the statement back and proclaimed himself a states’ rights advocate on the question.

Nonetheless, his initial signal on the North Carolina law marked a new phase in the campaign. As voting moved to Northeastern states with fewer evangelicals, Trump spoke much less about religion and his evangelical love affair. Among his winks to social moderates: praise for Planned Parenthood for having done “very good work for many, many—for millions of women.”

Trump’s comments on immigrants, political correctness, and Muslims suggest he is far more anti-multicultural than he is pro-religion. He talks more about symbols and public icons than about faith or morals. “If I become president, we’re gonna be saying ‘Merry Christmas’ at every store,” he said last October. “The ‘Happy Holiday’ you can leave over there at the corner.”

It’s an empty promise, since no president could force “every store” in America to give a Christian greeting. But the fact that he chose to make the media-driven Christmas wars a centerpiece of his argument to Christians shows that his real engagement is with identity politics, not religion.

A Smorgasbord, Not a Tea Party