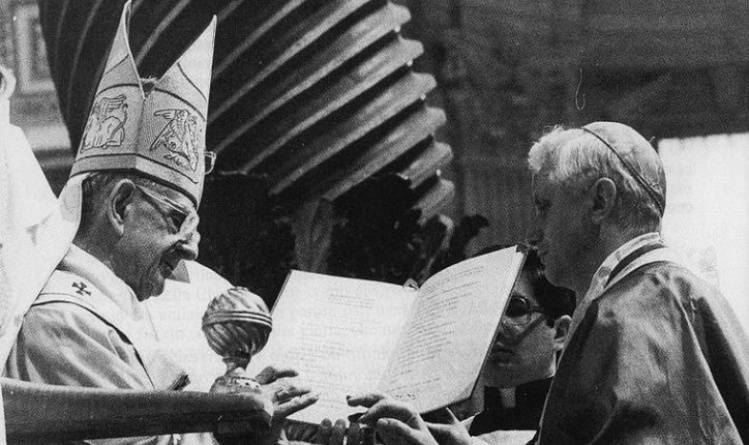 It has been nearly a decade since George Weigel somewhat infamously proposed reading Pope Benedict XVI’s then-new encyclical letter Caritas in veritate with red and gold markers in hand. In a National Review article, Weigel suggested that readers use the markers to distinguish the parts sufficiently in line with neoconservative ideology from the rest of the pope’s teaching.

That article also included a swipe at Pope Paul VI’s 1967 encyclical, Populorum progressio. “In the long line of papal social teaching running from Rerum novarum to Centesimus annus,” Weigel wrote, “Populorum progressio is manifestly the odd duck.” He called it “barely recognizable as in continuity with the framework for Catholic social thought.”

Weigel’s glib dismissal of Pope Paul’s encyclical was highly misleading. After all, Benedict promulgated Caritas to commemorate Populorum’s fortieth anniversary. That fact itself is extraordinary, because almost all papal social documents have been timed to mark major anniversaries of Pope Leo XIII’s Rerum novarum, the foundation of modern Catholic social teaching. But here was Pope Benedict, marking Populorum’s anniversary with a major encyclical and calling his predecessor’s document “valid for today and for all time” and “the Rerum novarum of the present age.” He couldn’t have used stronger or less ambiguous words.

Pope Benedict was not alone in his profound esteem for Populorum progressio. Twenty years earlier, Pope John Paul II had released his own encyclical, Sollicitudo rei socialis, “to pay homage to this historic document of Paul VI and to its teaching,” which John Paul said “follows directly in the line of the encyclical Rerum novarum” and “retain[s] all [its] force as an appeal to conscience today.”

All this is worth recalling as we approach March 26, 2017—Populorum’s fiftieth anniversary. Far from being an oddity best ignored, it still offers vital resources for the dilemmas and decisions now facing the church.

THE DEVELOPMENT of peoples—the encyclical’s topic—had emerged, in its economic and political senses, as a major international issue in the mid-twentieth century. Rich nations, the consensus of the time held, could effectively address world poverty not simply by sharing their bounty with those who have less, but by helping poorer nations increase their own production of resources.

Both Pope John XXIII and the Second Vatican Council had encouraged such efforts, but they had accepted that era’s standard economic framework for thinking about development. With Populorum progressio, Paul VI pushed the definition of development in new directions. He insisted it is not merely about economics and technology; development is about the human person, human dignity, and human communities. Paul called for “a new humanism, one which will enable our contemporaries to enjoy the higher values of love and friendship, of prayer and contemplation, and thus find themselves. This is what will guarantee man’s authentic development—his transition from less than human conditions to truly human ones.”

Attentiveness to “human” elements of development—including culture, community, family, the environment, and human rights—yields an integral human development. This line of argument reflected the influence of some of the brightest lights of the Catholic intellectual world of the day, including the philosopher Jacques Maritain and the Dominican priest and social scientist Louis-Joseph Lebret.

Pope Paul did not abandon the more traditional approach to the alleviation of poverty, which called for redistribution of the world’s goods for the greater benefit of the poor. He insisted that “the superfluous goods of wealthier nations ought to be placed at the disposal of poorer nations.” But it was the pope’s call for integral human development on the international stage that was both new and striking.

POPE PAUL GROUNDED that call in one of the most fundamental concepts of Catholic social tradition: solidarity. For him, it was important not only for individual people to understand and live out solidarity with others, including those in other parts of the world; nations had a similar moral obligation. Just as it is a mistake to understand society as an atomized collection of individuals, neither can the world become simply a collection of nations, each looking out only for its own interests.

Here Paul develops the teaching of his predecessor, Pope John XXIII. Solidarity had played a prominent role in that teaching, but as Allan Figueroa Deck, SJ, has observed, Paul “invested it with richer significance and urgency, and established it as a fundamental and distinctively Catholic norm of social and economic justice.”

The encyclical also offers a new and vigorous affirmation of another principle of Catholic social teaching, the universal destination of goods, which insists that access to the necessities for a life of basic dignity is a human right. “All other rights,” Paul wrote, “whatever they may be, including the rights of property and free trade, are to be subordinated to this principle. They should in no way hinder it; in fact, they should actively facilitate its implementation.”

Grounded in centuries of Christian doctrine and theology, this teaching gives teeth to the concept of solidarity, which might otherwise remain merely a vague and pleasant notion. It also stands at odds with the stark absoluteness of the concept of property ownership that most Americans consider to be self-evident. St. Jerome’s line—which Paul cites—aptly summarizes the point: “The earth belongs to everyone, not to the rich.”

Many of Pope Paul’s predecessors—including Leo XIII, Pius IX, and John XXIII—had also insisted upon the universal destination of goods, but they had presented it as a sort of subsection to the principal of private property. In Populorum, private property comes only after reference to the universal destination of goods and falls within the context of it. John Paul II would later follow Paul’s lead by identifying the universal destination of goods as “the first principle of the whole ethical and social order.” A similar approach is taken by the Catechism of the Catholic Church. The result is a relativized concept of the right to private property that is consistent with the rest of the church’s social teaching, rather than standing as an exception to it. Ownership, it says, is valid to the extent that it serves the good of persons, especially the poor, and collapses in cases where it does not.

A half century after its publication Populorum continues to shed light on the Christian life in an era of global economic uncertainty and the continued exploitation of poor nations at the hands of rich ones.

Paul’s condemnation of “pernicious economic concepts” such as “profit as the chief spur to economic progress” and “free competition as the guiding norm of economics” surely resonates today as much as it did in 1967. The “international imperialism of money” that Paul warned would be the result of embracing nearly unbridled capitalism has come to pass in ways that he could not have foreseen. Economics, Paul insisted, “is supposed to be in the service of man.”

Moreover, the United States seems currently to be rejecting, to a degree unknown for generations, the international solidarity that Paul VI insisted nations must embrace. That makes the pope’s warning against nationalism more relevant to American Catholics—or at least those who wish to form their consciences and their civic activity upon the teaching of their church—than at any time since the encyclical was released a half century ago.

“There is no global anthem, no global currency, no certificate of global citizenship,” President-elect Donald Trump noted with satisfaction at a December 2016 post-election rally in Ohio. “We pledge allegiance to one flag, and that flag is the American flag. From now on, it’s going to be America first. Okay? America first. We’re going to put ourselves first.” That’s a stance that just can’t be squared with what Paul VI insisted basic moral principles demand of wealthy nations.

FINALLY, DESPITE Populorum’s importance, any honest assessment of the encyclical must acknowledge that even Paul’s integral approach to development is not free of weaknesses. Many have noted that Western development programs of the past seventy years have, intentionally or not, served as instruments of dependency, exploitation, and neocolonialism. (It appears Paul himself came to recognize this and offered a corrective approach in his 1975 apostolic exhortation Evangelii nuntiandi, which recognized the need for reforming structures of political power in order for human dignity to flourish.) Others have pointed out the folly of spreading a way of life that, while rich in benefits, is unsustainable in terms of the long-term well-being of the planet and the human civilization that economic development supposedly benefits.

President Trump is correct, of course, that there is “no global anthem, no global currency, no certificate of global citizenship,” at least in terms of current legal structures. But Catholics are well equipped by the moral teachings of their church to recognize bonds of global citizenship that legal structures fail to reflect. Certainly these bonds, and the allegiance we owe solely to Jesus Christ as Lord, relativize (at the very least) any allegiance we might pledge to a particular flag. On the fiftieth anniversary of Populorum progressio, they are bonds well worth recalling—even if some in America today would prefer to strike them out with a red marker.