A Murder of Which They Knew Nothing
By Dorothy Day
U.S. Catholicism
Capital Punishment
Domestic Affairs
Ethics
From the Archives
Laity
Poverty
Social Justice
Women in the Church 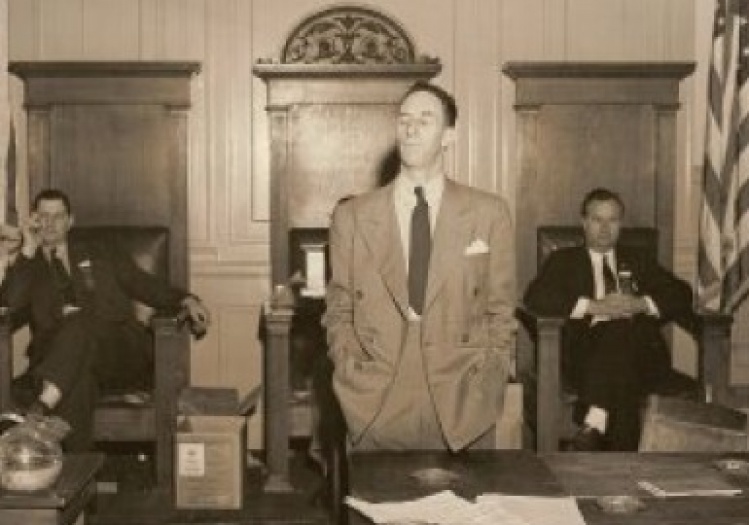 We drove over Golden Gate Bridge through the warm spring sunshine, and for half an hour through the mountains over a four lane highway. Dick Bourret of the Young Christian Workers was driving, and Miriam Tinkin of the Defense Committee and a girl from the American Writers League had come along. We talked about the case as we drove, and we were not paying much attention to the scene about us.

The Defense Committee is supported by the California State Federation of Labor, by the Maritime Federation of the Pacific, by the Alameda and San Pedro, Portland and Seattle Central Labor Councils.

The three men we were going to see were members of the Marine Firemen division of the Maritime Federation and were convicted in Oakland, California, of a crime of which they knew nothing, the murder of an engineer on the Point Lobos in March, 1936.

The Point Lobos, a freighter, was docked in Alameda, across the bay from San Francisco. On that morning two men saw a seaman by the name of Wallace and identified him later at: the trial. One testified that Wallace had asked him to go over to the Point Lobos with him in order to get this engineer. Another, the second engineer on the Point Lobos, testified that he saw Wallace coming out of the cabin of the engineer who was murdered, George Alberts.

When the arrests were made in August, just before the beginning of the 1936-37 strike, not only Wallace was arrested, but Earl King, head of the firemen, San Francisco vice-president of the Maritime Federation; Earnest Ramsay, patrolman for the firemen; and Frank Connor, ship's delegate on the Point Lobos.

King is today a man of 46, Connor 44, Ramsay 30, after having served three years. For, unbelievable as it may seem after reading the testimony, the three men, together with Wallace, were convicted.

The contention of the prosecution is that King hired Ramsay to beat up Alberts, and that Connor, Wallace, a seaman called Sakovitz, who is supposed to have dealt the death blow, were the ones responsible for the murder. But even the prosecution proved that King and Ramsay were in San Francisco at the time. Connor was on duty in the engine room of the ship at the time. Sakovitz never has been found.

For the whole involved story, it is best to get the pamphlets issued, one entitled "The Ship, Murder," the other, "Punishment without Crime,” both obtainable from the Maritime Federation of the Pacific, 24 California Street, San Francisco. Both pamphlets cost a nickel. Knowing how responsive the readers of The Commonweal are to the cry for justice, I confidently urge them to get the pamphlets and write to Governor Olson their opinion in regard to the case. They will thus be performing many of the works of mercy.

THE BUSINESS OF this article is to tell of my visit with the men at San Quentin. They had read the Catholic Worker for the past two years, so they knew the paper, and we plunged right into conversation.

"I've been studying carpentry while I'm here," King said, "so that if I ever go back to the land I'll be able to build me chicken houses.”

I've heard that many a time from seamen. When at sea they dream of the land, it is always of the farm, not of the city.

"I might have gone yesterday, Easter Sunday," Connor said, "but the place was too crowded." There is one priest, Father O'Meara, for all the Catholics in San Quentin.

You look at the pictures of the three men as they appear on the cover of one of the pamphlets, and then look at them as they are today, and you see the tragic mark of prison life. King, a huge fellow with a chest like a barrel, has grown stout with the inactivities of prison life. All the work he has to do is sweeping his cell block. There are twice as many men there as the prison is supposed to hold, so naturally there is not enough work for them all. There are two in a cell, and Ramsay complained that his reading was interrupted. He liked travel books and biographies, and he never got through more than a few pages without the man in the lower bunk calling up, "Say, Red!" (Ramsay has curly red hair.)

All three of them do a lot of reading, books their friends send them, such as Factories in the Fields, Grapes of Wrath, newspapers and magazines. None of them subscribe to the prison library; they say the books are not much good and they are dirty, pages missing, and it's too much trouble. But their friends have kept them supplied.

The grub is good, and they described the Easter dinner. A year ago there were food riots at San Quentin and forty of the prisoners were badly beaten by the guards.

Outside the big room where we sat at a counter facing the men, the scene was bright; there was the prospect of rolling hills. As we drove in, we passed a line of prisoners working on one hillside, among them one of the strikers from the Salinas Lettuce strike who had assaulted a scab. He had not been badly injured, but the striker got ten years.

There are wide flower gardens around the place, there are the quiet waters of the bay reaching up to the very gates of the prison, there is freedom, light and joy, outside those windows, and one's heart is constricted facing three men held behind bars.

“While there are men in prison, we are not free,” Debs had said.

As long as the members suffer, the health of the whole body is lowered, and these men are members of the Mystical Body of Christ. They are our brothers, sons of the same Father.

Connor is suffering the most because he, after a third degree grilling, signed a confession which he immediately repudiated from his hospital bed where he had to be taken after his three-day ordeal. It takes every effort on the part of the others to keep his courage up. It eats into him continually. He broods over it, he is sensitive on the subject, he is overcome with a sense of guilt which the loyalty and friendship of the others does not seem to be able to disperse. He needs our prayers. King suffers, but is matter of fact. "As long as a man keeps, his self respect, he can stand anything," he says. When he gets out, he will go on with his union work; there is a job before him.

Ramsay admits a man can never be the same again. It does something to him; if he didn't have the union in back of him he'd go nuts. "You see them cracking up around here all the time."

What makes it worse is that the men, although they have been found guilty in the court of second degree murder which carries with it a sentence of from five years to life, have not actually had the terms of their imprisonment set. As I write, they expect to be sentenced, and after they are sentenced, their cases can come before the pardon board, not before. The ruling is that the sentence must be set when they have served half of the minimum, but they have passed that by eight months. They live in constant expectation, in hope that is continually disappointed. They wait, they expect, they hear nothing and they steel themselves to wait some more.

WE TALKED FOR the full hour we were permitted, sometimes to one man, and sometimes the conversation was general. King spoke most on the story of the union struggle in San Francisco, the struggle for leadership in the unions, the planting of company men among the union leaders, the need for education of the rank and file.

We talked of books, of the war, of the prospect of freedom. The time passed quickly. The visit seemed very brief, but even after that short hour, one would not be able to forget the faces of the men, their grim endurance, their haggard anxiety as we spoke of the possibilities of some action on the part of the parole board. I can see them now as I write; they are men one cannot forget.

In the afternoon after my visit to San Quentin, I was walking along Sutter Street in San Francisco. There were flower stalls on the corners. The air was filled with fragrance. In one of the department stores there was a display of Walt Disney cartoons for Pinocchio. I stopped to look at it, I window-shopped at other stores. I was free, I could choose what I wished to do, where I would eat, whom I would see, where I would go. And tears came to my eyes. I was free, but not those men out at San Quentin, not many another weary prisoner. Along Market Street the crowds are sauntering all the day, seamen off their ships are sauntering, debating how they will spend their free time. But not those men at San Quentin. The sunlight is a mockery to them.

But we can do something.

We can help them bear their burden. We can help them by remembering them in our prayers. Back at Mott Street at the House of Hospitality there is hanging on the wall of my room a painting by Van Gogh, of prison walls, and a circle of prisoners. It is there to remind me to pray for the prisoners.

We can help by sending for the pamphlets which tell the details of the case against these men. We can help by writing to Governor Olsen of California.

And as I write this, I write it fearfully, because it is putting a great responsibility on you who read. If you hear of this, just one of the cases of injustice in our industrial civilization, and you turn aside and do nothing, you are like the man who left his neighbor wounded on the roadside. "If you did not know, you would not have sin." But now, knowing, you must do something. And I know you will.