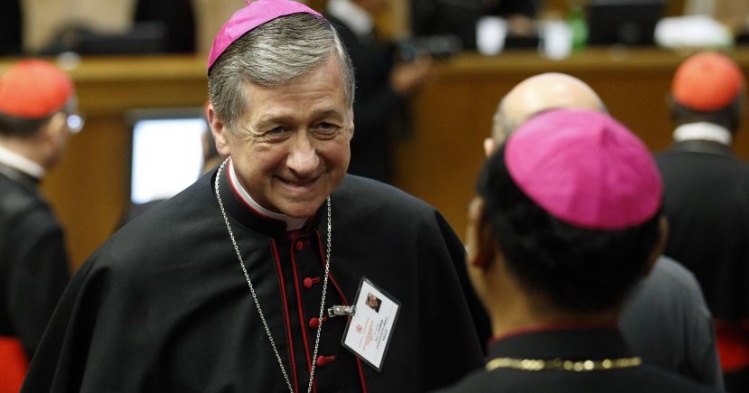 Throughout the Synod on the Family, my thoughts kept coming back not to my own family (partner, two kids), but to a nun, and a priest.

NDM: So you’re the person trying to make Notre Dame a warm and welcoming place for gay students while making sure the University abides by Catholic teaching. While we might not say this puts you between a rock and a hard place ...

ML: I would. No matter what I do somebody’s mad at me. I just can’t please everybody. And people do call. . . . Students here go through a hard time coming to terms with their sexual- and self-identity, but we have an obligation to do all we can to be in accordance with church teaching and respond to their needs. The kids get this. They know this better than anyone else because they experience it themselves. It’s a great definition of a dilemma.

I have thought of Sr. ML often in the years since her death in 2013, most especially during the recent synodal drama and discourse. No one had a steadier hand on the tiller than she, navigating through the shoals. She would have been fascinated watching the assembled bishops attempting to navigate the enormous barque of Peter through the same shoals—and many more, besides—crashing into rocks here, executing an elegant tack there, raising and tightening the sails, then abruptly lowering them.

She, like Archbishop Blaise Cupich after her, knew that those who man the tiller do so from the stern and do well to look and listen as they steer:

Now people just want to live their lives. They want to live it with a partner. So many people out there are just ordinary folks. One thing I’ve learned is the incredible variety—where people are now on the issues, what they hope for. They run the gamut. That’s just been a revelation for me.

I have thought also of the priest who was pastor at my local parish from 2006 to 2014. I would use his first name, except he himself requested, when first introducing himself to parishioners, that we refrain from doing so. I remember leaning to whisper in my partner’s ear, “That request is the tip of a very large iceberg.” Father was a young “JPII priest,” a graduate of the Franciscan University of Steubenville, and a seminarian of the diocese of La Crosse during the era of then-Bishop Raymond Burke. In the ensuing week my partner and I anticipated both of us being denied Communion, one of us being summarily dismissed from duties as choir member and cantor, sacramental preparation for our second-grader being put in doubt, and our sons’ attendance at the Catholic school being scrutinized. Wanting to rip off the Band-Aid, my partner and I introduced ourselves and our sons to the new pastor after Mass the following week. And, to our surprise, this affable, charming extrovert skipped not a beat, referring easily to our adopted sons as “gifts” as he asked about them in the manner of any gracious adult meeting two small children. When we sent him a Christmas card he sent his own back, addressed to the family.

In the ensuing eight years until he was rotated to a different parish, we all coexisted. My partner sang, we all received the Sacraments, and my son received a scholarship from the Men’s Club. And Father? He became the go-to guy for local media outlets wanting clergy comments on the state Republicans’ 2008 bid for a constitutional amendment banning same-sex marriage. He spoke gamely and frequently from the pulpit on the evils of homosexuality, and birth control, and all manner of offenses such that when he finished his list it seemed the whole congregation had slunk down in their pews a good few inches. Homosexuality was treated separately on occasion, in bulletin bromides.

And all the while, we kept showing up, and he kept greeting us, talking Notre Dame football with our eldest and admiring the snazzy dressing of our youngest. He was beloved in the parish, his self-deprecating humor and his Bidenesque ease with women and children and the elderly all undeniable. I have no doubt that anyone going to him with difficulties or crises would have been assisted compassionately and with sensitivity. He had the equanimity and serenity of a man of prayer, and, more than a year later, we find ourselves missing him.

He is, in effect, already leading the way for his fellow JPII priests. Unyielding in his clear and passionate defense of current doctrine, he is welcoming in his own way of the gays he no doubt considers to be lost sheep. That the handful of gay folks in his parish consider themselves to be lost sheep not by dint of their partnered lives but by dint of a thousand failings held in common with their straight brothers and sisters is beside the point.

As one commenter recently noted on dotCommonweal, “[As] in most gigantic bureaucracies, what happens is largely irrelevant to what is already happening on the ground. And what is occurring on the ground is that permission [to receive Communion] is granted by most priests and the praxis has already shifted.”

Cathleen Kaveny, speaking on a Commonweal panel on the synod in September, astutely pointed out, “Conscience and an internal forum function in the whole ecosystem as an escape valve—you know, they let the air and the pressure out—and it doesn’t eliminate the need to rethink the rule or the norm you’re creating the escape valve for. It’s important to have, but it’s not a universal solvent.” Like many gay and straight Catholics living the tension between the church’s sexual teachings and the still small voices of our consciences, I welcomed Pope Francis’s tone-setting encouragement to the bishops to speak honestly and without fear when discussing the rules and norms and escape valves.

The outrage and abuse directed at the poetic and deeply moving paragraphs inked by Archbishop Bruno Forte in the 2014 relatio post disceptationem and their subsequent absence from the relatio finalis was clue enough that there would be only so much rethinking tolerated by the bishops themselves—particularly if the rethinking of the document drafters did not accurately reflect that of the assembly. Expectations for what might or might not be discussed and written in the 2015 iteration were, for me, not high.

But even so! We watched in astonishment in the months after the close of the 2014 Synod as the Untier of Knots hugged Diego Neria Lejárragathe, the transgender Italian man whose missives had prompted an invitation to the Vatican, and then during last month’s papal visit to the United States as Francis greeted Yayo Grassi, a gay former student, and his partner. We watched as some dioceses invited and encouraged the laity to reflect and comment upon the lineamenta, and as some did no such thing. We noticed the difference in wording between the relatio finalis that concluded the 2014 synod and the instrumentum laborem issued before the 2015 synod, and celebrated both the familiar content and the newly insistent tone of the added passage:

The following point needs to be reiterated: every person, regardless of his/her sexual orientation, ought to be respected in his/her human dignity and received with sensitivity and great care in both the Church and society. (131)

And, to be sure, when the 2015 synod was two weeks underway, gay Catholics sat up straight when Archbishop Cupich answered a question at the synod’s daily press briefing on October 17, 2015:

Gay people are human beings, too. They have a conscience. My role as a pastor is to help them discern what the will of God is by helping them look at the objective moral teaching of the church and yet, at the same time, helping bring them through a period of discernment to understand what God is calling them to at that point.

Reading the apoplectic responses in the conservative blogosphere, I could not help but think of Pope Francis’s homily in Philadelphia and his reminder therein: “[Jesus’s] openness to the honest and sincere faith of many men and women who were not part of God’s chosen people seemed intolerable.”

And, finally, we read the unprecedented apology contained in the German working group’s final commentary:

Here, a confession was important to us: wrongly understood efforts to uphold the Church’s teachings time and again led to hard and merciless attitudes, which hurt people, especially single mothers and children born out of wedlock, people living together before or in place of marriage, homosexually oriented people and divorced and remarried people. As bishops of our Church we ask these people for forgiveness.

The cursory treatment of gays in the 2015 relatio finalis is simply a repeat of what Andrew Sullivan called the “foot-stamping” in the 2014 document, with its reality-defying insistence that “there are absolutely no grounds for considering homosexual unions to be in any way similar or even remotely analogous to God's plan for marriage and family.” But it would be folly to consider this line the only take-away.

Even as we await a post-synodal apostolic exhortation from Pope Francis, we bear in mind what Sullivan wrote in 2014: “Some things cannot be unsaid. Some testimony from actual, broken but struggling Christians can never be forgotten.” Yes, we have heard strong restatements of the church’s teaching on sexual morality. But we have also seen tantalizing glimpses of what it might look like if an Ignatian spirituality of discernment were to infuse the church in its mission of welcome and mercy. We have heard the testimony of prominent churchmen finding God in unlikely places, saying, with Sr. ML, “That’s just been a revelation for me.”

With the bishops now heading back to their dioceses, I think of gay friends and acquaintances—the hospice nurse, the marriage and family therapist, the suicide hotline worker, the family physician, the diocesan staffer, the middle school teacher, the literacy instructor. All of us go home to our families at the end of the workday. Are we not all workers in the field hospital that is the universal church? And are we not all patients? Of course we will disagree with some of the administrators and physicians of the hospital about what is flawed and broken in us (and in them!). But is it not to be celebrated that we are there, toiling side-by-side with you? Should we not continue to listen to you, and should you not continue to listen to us as we all strive to live out the Gospel?